Like many athletes, musicians, socialites, trustafarians and others with the wherewithal to live wherever they darn well please, the ex-Yankee (Met, too) and current YES Network commentator, David Cone, decided some time ago that he’d had enough of uptown life, allegedly leasing a Soho townhouse, likely for somewhere in the neighborhood of $25,000 a month, from the fetching Russian actress Elena Zakharova. And the Post reported last month that Mr. Cone had entered contract with his fiancee, Taja Abitbol, to buy a four-bedroom spread at Greenwich Lane listed for $7.97 million. Now, whatever ties the World Series champ still has to the Upper East Side, a four-bedroom condo at 151 East 85th Street is not among them. Mr. Cone has just sold the place for $5.9 million, according to city records.

That will not, in all likelihood, be enough to cover the the Greenwich Lane pad, and a bit less than the $6.495 million that Mr. Cone hoped for, according to the listing held by Michel Madie and Victor Alia, from Michel Madie Real Estate Services. But you can’t really expect to swap without a bit of additional investment a place at 85th and Lex for one in one of downtown Manhattan’s most sought-after new developments. Still, Mr. Cone’s old condo, which was purchased by the imaginatively-named 151 East 85th Street Unit 8C, LLC, isn’t half bad.

There are 10-foot ceilings, oak floors, a formal gallery and a library. The master bedroom, complete with sitting area, stands sequestered behind a walk-in closet, to maximize privacy. Built in 2007, the unit evinces bland–if spacious–high-end utility, a definite indistinctness that one can guess at from the listing’s oddly-defensive opening lines: “It would be a serious insult to consider this building, or this rare gem within this building …average. It is the best 4-bedroom home this neighborhood has to offer.” The price “reflects the reasonableness and commitment of the sellers to sell, to sell fast.”

The lady doth protest too much, wethinks. 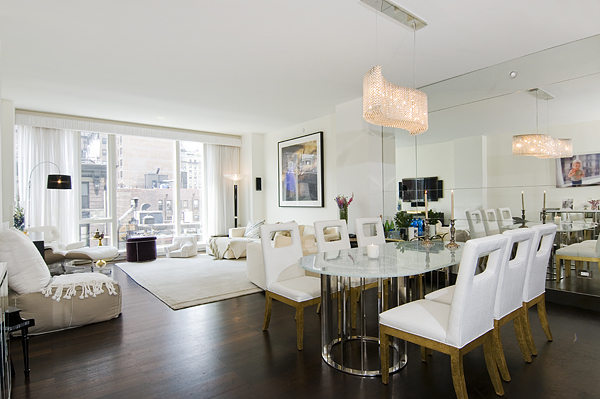