Talking to the two brothers that make up Rae Sremmurd, 19-year-old Swae Lee and 21-year-old Slim Jimmy, is exactly like you’d expect. Both ecstatic over their recent success after years in the underground trenches of hip-hop, the brothers are energetic even during this particular early Friday morning. “Today we woke up and are on our way to the airport for a show in Detroit. I’m in my pajamas,” said Lee, who frequently punctuated his sentences with the phrase “SremmLife!”, the name of the duo’s debut album. “I’m all good, though. Couldn’t be better. SremmLife!”

Swae and Slim have reason to be excited. Since breaking out onto the scene with their hit song “No Flex Zone,” the brothers of Rae Sremmurd (which is their label, Ear Drummers, backwards), have followed up their debut with two more hit singles, the catchy “No Type” and the latest smash, “Throw Some Mo,” which also features the likes of Nicki Minaj and Young Thug. “I’m gonna be real right now,” says Jimmy. “Around women, I try to remain calm and collected. But around Nicki, I couldn’t even talk. I could barely get my voice to leave my mouth! I wasn’t starstruck, but you know you’re in the game when you’re eye-to-eye with Nicki Minaj. It means you made it.”

Casual observers of hip-hop think of Rae Sremmurd as an overnight success story, partly due their young age and the rapid-fire succession of the brothers’ breakout hits.

In reality, they’ve been plotting their ascension to the main stage for years. “People don’t know that we were a different group at first and were grinding for a long time,” explained Jimmy of their first iteration dubbed Dem Outta St8 Boyz. “We’ve been grinding for about eight years; with nobody telling us we were just trying stuff on our own. We learned engineering and how to make beats. We used to DJ and host parties for fun, not even knowing that it could be a real career. We were just doing it just to do it.”

The struggle was definitely real for Lee and Jimmy—they were both homeless for a time—but the stars aligned when they linked up with P-Nasty of the Atlanta label Eardrummers Entetrainment, run by mega-producer Mike Will Made-It, the mastermind behind global smashes like Juicy J’s “Bandz a Make Her Dance” and the Miley Cyrus hit “We Can’t Stop.” Mike Will saw something in Rae and promptly signed them, producing the majority of the tracks on their album. Mike and the duo’s biggest hit, “No Type,” came about pretty simply, according to Jimmy. “You see, Swae likes all the ladies and doesn’t want to break any hearts,” he says of the hit song’s origin, which later became a Top 5 hit on the Billboard Rap charts. “So he said he likes ‘no type,’ he likes all the pretty girls. We made it a song and it was just like … BAM!”

Said Swae of his process in the studio, “I’ll hear a beat and think, ‘How can I make this a banger?’ I’ll write the lyrics on my phone or on a piece of paper, and either way it’s going to be a slapper.”

Slappers aren’t all that hard to find on SremmLife, their critically acclaimed debut which was released in early January. After all, the music of Rae Sremmurd is Kanye West-approved. “We got to meet him for a brief moment at a Super Bowl pre-show we performed on,” said Jimmy. “He told us he liked our music, so we respect him all the way.”

For now, Swae and Jimmy are enjoying the fruits of their labor—whether it’s an upcoming tour alongside the aforementioned Minaj or a new house they just purchased in Studio City, Calif. (The boys were recently caught by TMZ riding both a skateboard and the baggage carousel at LAX.) Said Jimmy, “This is everything you dream about, everything you wish for, and everything you work for.”

With that, the boys are off to Detroit for that gig, still sporting their pajamas and more hyped than ever. Any final thoughts, Swae? “You gotta say… SremmLife till the end. SremmLife till I go. Sremm de la Cr֒֒֒֒eme. EarDrummer Records!” 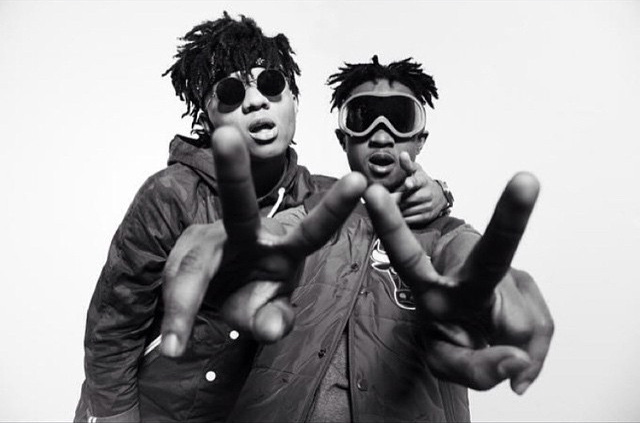