JERSEY CITY – If all politics are indeed local, in Hudson County, it just got up close and personal.

When state Assemblyman Charles Mainor (D-31) declared on Sunday he would run off the line against the Hudson County Democratic Organization (HCDO) establishment, he sent shock waves throughout a party establishment that has been largely unified in recent months.

Mainor made his move on what happened to be Palm Sunday, the day remembered as the end of Jesus’ road to Jerusalem to meet his fate. On Monday morning, PolitickerNJ spoke to several high-ranking Hudson County Democrats who all conveyed the same message: Mainor is on the road to ruin.

“I’m a man of my word. And when people talk to me and tell me their intentions, and I convey them, I am conveying what people told me,” said state Assembly Speaker Vinny Prieto (D-32), referring to a conversation he had with PolitickerNJ’s Chase Brush on Thursday in which he indicated that Mainor was not going to seek reelection. “But people can do what they have to do. Then we as a party will do what we have to do.”

As he announced his reelection bid on Sunday, Mainor told PolitickerNJ that when he was discussing his decision with Prieto, he had been leaning toward not running, but had never definitively closed the door on the other option.

Prieto, however, begged to differ.

“[Mainor] had said to me that he was out, and that he would give me a letter to that effect. And I said it was not needed,” Prieto said. “I will take a lie detector test, anywhere, any place, if somebody doubts my accuracy. He’s got until the end of the day [to file signed ballot petitions]. That’s up to him.”

Prieto expressed confidence in the HCDO-backed Assembly slate of Nicholas Chiaravalloti of Bayonne, and Angela McKnight, of Jersey City, as he accompanied Hudson County Executive Tom DeGise to the Hudson County Clerk’s office as DeGise filed petitions to run for his fourth full term.

DeGise, supported by the mayors of all 12 Hudson County municipalities, registered his own dismay at the disruption of Democratic unity.

“Rule number one – if you tell the chairman you’re going to do something, you ought to do it,” DeGise said. “I think he’s making a mistake. Charlie was a product of the Democratic Party and Democratic unity. He should have a respect for the process.

“You may not like it that the mayors get to pick the candidates,” added DeGise, a reference to the fact that in the 31st Legislative District, made up of all of Bayonne and parts of Jersey City, the mayors of the two Hudson County cities traditionally choose one state Assembly candidate each. “But that’s what has led to a unified Hudson County over the last couple of years. It’s a rule that all of the other mayors have abided by. Does Charlie have a right to run? Of course he does. But he has to realize that he’s stepping outside of the party when he does that.”

Jersey City Mayor Steve Fulop has had a more difficult time finding another candidate to replace Mainor on the line, the most recent candidate named being McKnight. Fulop has had these difficulties even thought he is working together with his sometime rival in Hudson County politics, state Senator Sandra Cunningham (D-31), to unify behind a Jersey City-based Assembly candidate.

One of Mainor’s primary motivations for running for reelection for the seat he has held since 2010 is the memory of Glenn Cunningham, Jersey City’s first African-American mayor and Sandra Cunningham’s late husband, who died in 2004. Mainor, a retired Jersey City police detective, was the head of Cunningham’s personal security detail.

But DeGise, defeated by Cunningham in the 2001 Jersey City mayoral election, has his own view of Cunningham’s legacy.

“Glenn was obviously an iconic figure in Jersey City and Hudson County, particularly in the African-American community. So [Mainor] is not the only one who is the legacy of Glenn,” DeGise said. “When Glenn won, he had the overwhelming support of most of the Democratic Party of that section of the city. I don’t think Charlie can put his flag down and claim Glenn Cunningham as his patron. I think there are a whole lot of people in that community who will point to Glenn as their inspiration for going into public service.”

DeGise noted that politics, particularly in Hudson County, is always a gamble.

“When you put your name on the line to run for office, it’s you,” DeGise said. “Charlie is running against the party that made him. You can’t roll sevens all the time. And this time, I have the feeling he’s going to roll snake eyes.”

In some ways, Mainor’s dice roll adds to the ongoing roulette game involving the 2017 Democratic gubernatorial nomination. Mainor is also not the choice of Fulop, who, along with state Senate President Steve Sweeney (D-3) and former U.S. Ambassador to Germany Phil Murphy, is considered to be one of the prime candidates for the 2017 nomination.

Fulop chose not to immediately discuss the statewide Democratic chessboard when discussing the ramifications of Mainor’s run when talking to PolitickerNJ on Monday. But the Jersey City mayor did talk about one political theme with a local twist: elections have consequences.

“This is a democracy, so anyone can run. But I know Angela is by far the best candidate,” Fulop said. “In the end, Charlie is likely in for an eye-opening experience. But even more importantly, this confirmed our suspicion all along that people had no intentions of keeping their word while the organization operated in good faith every step of the way.” 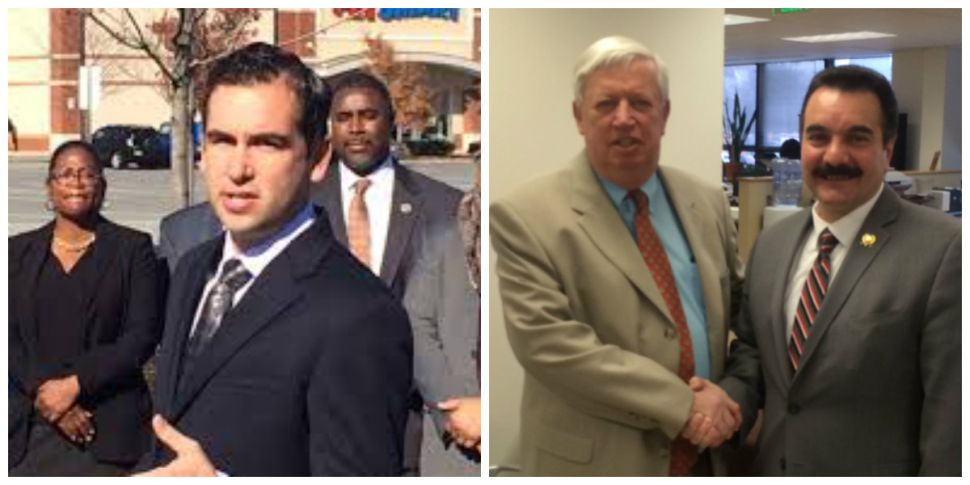