Democratic power brokers, past and present, couldn’t keep a political gadfly from running as a Democrat in a Brooklyn special election.

In an embarrassment for the political establishment, Guillermo Philpotts, a perennial candidate for local office, secured the Democratic nomination for a Crown Heights Assembly race this afternoon, beating back a last-ditch effort from ex-Democratic boss Clarence Norman to keep him off the ballot line, sources say.

“Everything went smoothly,” Mr. Philpotts told the Observer. “I won’t have to spend that much energy fighting the Democratic machinery.”

Mr. Philpotts will still likely face a multi-candidate field in the race to replace Karim Camara, a minister who vacated the seat to take a position with the Cuomo administration. In a State Senate election last year, Mr. Philpotts won a paltry 5 percent of the vote in a three-way race—but he will now have the upper hand on a slate of better-known candidates because they won’t be able to compete as Democrats in the heavily Democratic district.

Mr. Philpotts, as the Observer reported Friday, was able to win the nomination because he controlled his Assembly District’s unusually small county committee. Local District Leaders Jesse Hamilton, the state senator who defeated Mr. Philpotts last year, and Shirley Patterson failed to stock the county committee, allowing Mr. Philpotts to place friends and family members in the position to nominate him. Typically, county committeemen in Brooklyn take direction from the county leader, Frank Seddio. (Geoffrey Davis is now the male district leader after Mr. Hamilton gave up the post in January.)

Mr. Philpotts’ once unlikely victory followed an extended conversation with Mr. Norman in the backroom of the Rosa Parks Independent Democratic club headquarters in Crown Heights. Mr. Norman sought to convince Mr. Philpotts to instead back Ms. Patterson, sources say.

Mr. Norman, who represented the district before Mr. Camara, was one of the city’s most influential power brokers before his 2005 convictions for financial malfeasance related to his campaign. He was found guilty in 2007 of selling judgeships to wealthy Democratic Party donors. He was paroled in 2011.

After the backroom conversation failed, sources said that several members of the county organization in attendance attempted to convince Mr. Philpotts—who is recovering from surgery—to leave the meeting prematurely, without completing all the steps required to make himself the nominee. Had he “abandoned the meeting,” the county committee rules would have allowed Ms. Patterson to make herself the candidate to succeed Mr. Camara.

However, one of the attorneys present kept Mr. Philpotts from departing, and he successfully made himself the Democratic candidate. Mr. Hamilton and a staffer from the office of Brooklyn Borough President Eric Adams—both allies of the machine—and Brooklyn Democratic Party law chairman Frank Carone were present, as was Philpotts ally Assemblywoman Rodneyse Bichotte.

“There was a whole group of people hovering over Guillermo Philpotts, and they were trying to get him to give the nomination to Shirley Patterson,” one attendee told the Observer.

District leaders are usually responsible for getting county committee members on the primary ballot with other candidates. The 43rd Assembly District’s county committee is only 10 members large, far less than the dozens or hundreds-strong committees in other Brooklyn districts.

After a successful 2012 fraud lawsuit in the neighboring 42nd District completely vacated the county committee, the county organization demanded that district leaders obtain letters of consent from county committee candidates before putting their names on petitions, sources say. Ms. Patterson and Mr. Hamilton apparently failed to collect these letters and thus left most of the committee slots unfilled.

Ms. Patterson, Mr. Davis, the brother of former Councilman James Davis, and Diane Richardson, a candidate for district leader last year, are expected to run in the race on alternate ballot lines. 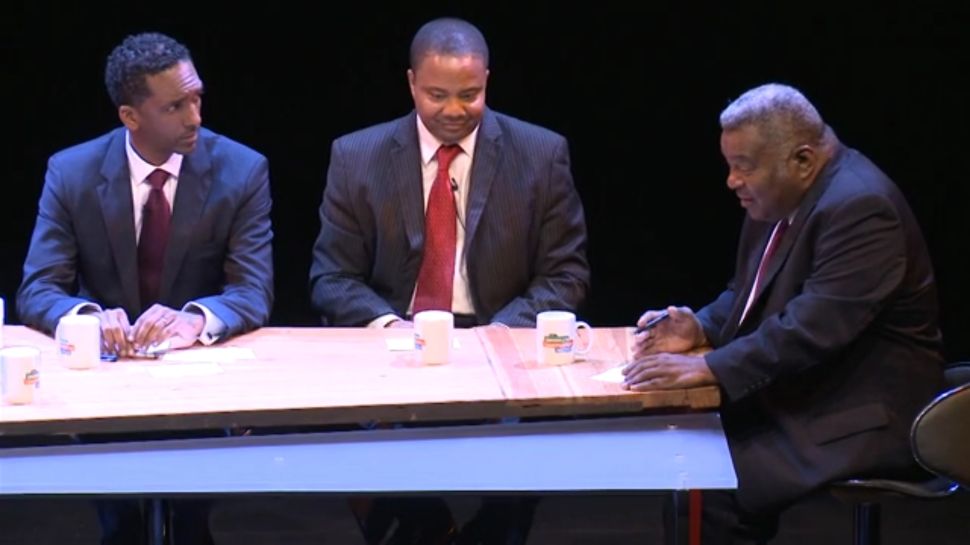