There’s an old joke: How can you tell if someone’s read the Song of Ice and Fire books before watching Game of Thrones? Oh, don’t worry, they’ll tell you. They’ll fucking tell you.

“Oh my God, this is that chapter? Just wait until you see what happens. Just wait. Just wait….Just wait.”

“That’s actually not how it happened in the books. It actually happens at night time, not during the day.”

“I won’t tell you who dies here, but it’s TOTALLY OBERYN I’M SORRY I COULDN’T HELP IT.”

What I’m saying is, there’s always been a divide, unspoken or not, between GOT show watchers and book readers, a sort of entitlement that the book readers felt, that they enjoyed the show that much more for having read the books first. If absolute power corrupts absolutely, then absolute power of knowing how the Red Wedding ends turns you into a dick, apparently. (Full disclosure: I read the books. There, I told you I’d tell you. I am guilty. Admitting it is the first step in a long process.)

Well, the time is nigh where TV Watchers will have the upper hand, according to a recent appearance at the Oxford Union by creator David Benioff, in which he confirmed what everyone already knew for years:

Luckily, we’ve been talking about this with George for a long time, ever since we saw this could happen, and we know where things are heading. So we’ll eventually basically meet up at pretty much the same place where George is going [in Book 7]. There might be a few deviations along the route, but we’re heading towards the same destination. I kind of wish there were some things we didn’t have to spoil in terms of the books, but we’re stuck between a rock and a hard place. So the show must go on.

Now, this isn’t surprising. George R.R Martin writes at the same pace Bran Stark runs a 5K, so it was only a matter of time before the show caught up. It’s not a shock, but it is kind of unprecedented. When was the last time this happened, that a SHOW spoiled a BOOK?

I mean, I’m sure people have spoiled themselves on books, but that was a choice. You could watch the Harry Potter movies before reading the books. Same with Lord of the Rings. That was a choice, because those books existed. No, this is a whole new level of book-related spoilers. It’s either watch the show and spoil the books or nothing. The show is running on like a freight train and book readers are still tied to the tracks. .

A couple weeks ago, tvDownload senior editor Drew Grant argued in favor of discussing TV openly, spoilers be damned, because that is just the nature of the beast. If you don’t want to be spoiled, then watch the damn show. This, of course, was a response to a piece on Medium by Rex Sorgatz arguing against spoilers, and in favor of a return to weekly appointment television. If there’s one sure thing that we cant take from those two pieces as a whole, it’s that nobody knows for sure what to do about spoilers, especially in a time when news outlets reporting on an actual real life murder investigation were criticized for ruining people’s Sunday nights. The concept of a “spoiler” in itself has ingrained itself into popular culture as steadfastly as the movies and shows that are being spoiled in the first place.

What do we do in an unheard of situation like this, where an adaptation overtakes its source material? Well, the obvious answer is to not watch the show if you’re afraid of spoilers. But at this point we’re four seasons in. Is the best solution really to just hop off? And realistically, is locking yourself in your room while your contemporaries watch the show for years and years really going to make you feel better?

Because the reality of this world we live in is this: not watching something does not equal keeping it a surprise. No, keeping it a surprise equals not turning on a computer, not talking to other humans, not going to work, changing your name, learning another language, and moving into a cabin in the deep woods with only animals and Mother Nature to keep you company. Even then, fucking Mother Nature probably watched it a day before you and carved the ending into a tree or something.

So what’s the solution? What am I trying to say? I’m saying the next step in “spoiler culture” is not having one, at all. I think the idea of a spoiler is about ten more Tweets away from collapsing inwards on itself and becoming something far less inflammatory and much more ambivalent.There is just simply too many forms of quality entertainment and too many outlets on which to discuss them to keep every single goddamn plot point floating around in the ether a secret from yourself. If you’re fighting to avoid spoilers, you’re fighting a losing fight that is only going to get harder.

This new development with Game of Thrones, where eventually a TV show based on a book series will spoil the books, it’s just another aspect to add on to the already crumbling idea that the universe has to lock away the end of season 2 episode whatever until you are ready to watch it.

Accept it. It might even feel good. It might even make the things that truly do go un-spoiled for you that much sweeter. As for us, the GOT book readers, the ones who tried and often failed to not annoy our fellow TV watchers, please don’t complain. We deserve this, and we deserve this hard. 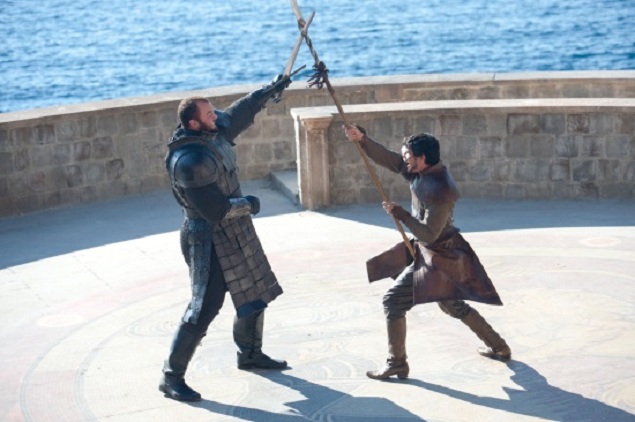