Brooklyn Councilman Vincent Gentile jabbed at his Congressional rival, Staten Island District Attorney Daniel Donovan, for taking off early from a candidate forum to attend a fund-raiser nearby instead of sticking around for a full-length debate.

Organizers of the Middle Class Action Project event informed the Observer that Mr. Donovan told them he would not have time for an extended back-and-forth discussion on the issues, and they changed the planned format so that each candidate answered a predetermined set of questions without any banter or rebuttals. Mr. Donovan, a Republican, answered the queries on a range of policy issues and left for his fundraiser before Mr. Gentile spoke—which the Democrat said he found surprising, especially since he had canceled his own planned campaign financing drive to participate.

“I’m disappointed, because I came to have a debate. Frankly, I changed my schedule. I had a fund-raiser scheduled tonight, in Brooklyn, and I switched it to another night so I could be here for the debate. So the fact is, Mr. Donovan didn’t change his schedule,” Mr. Gentile said. “I came here thinking we were going to have a debate, and I was ready for that.”

The questions focused on trade agreements and policy issues important to organized labor, such as paid family leave. Mr. Donovan told the small audience he supported many union-backed policies in principle, but was unsure how they could or should be implemented and paid for—drawing fire from Mr. Gentile, who gave unequivocal pro-labor union answers to every question.

“He really gives no answer, because in theory he supports them, but in actuality, he doesn’t want people to pay for them. So he doesn’t come up with a real answer or real solution,” he told reporters after the event was over.

Mr. Gentile’s camp reserved its heaviest ammunition for an email entitled “Gentile Dominates First Debate” that it shot out to reporters moments later.

“Fun fact: Dan Donovan didn’t want tonight’s debate to happen and did everything he could to avoid having to take a real stance on key issues,” the email claimed. “Behind the scenes, Dan pleaded with the organizers to change the format and he dodged question after question with evasive answers.”

Mr. Donovan’s camp contradicted both the organizers’s and Mr. Gentile’s claims that the event was intended to be a debate, and claimed they had been told from the outset it would take the form of a forum.

“It’s unfortunate the Gentile campaign is resorting to blatant lies to get attention. It’s silly, and we hope it’s not indicative of the kind of campaign he wants to run. We look forward to the actual debates already scheduled in Brooklyn and on Staten Island,” said spokeswoman Jessica Proud, while slamming the councilman for his pat answer on issues like paid leave. “Mr. Gentile blindly supports just adding another crushing burden on small businesses who are already struggling. It’s not surprising given his record raising taxes

Mr. Gentile, seen as an underdog in the race, has lashed out at his opponent on a range of issues, particularly seeking to tie the prosecutor to anti-organized labor elements in the GOP. The district, which covers all of Staten Island and some small fragments of Brooklyn, is one of the most heavily unionized in the country.

Mr. Donovan, on the other hand, has mostly ignored the Democrat except in fund-raising emails.

The special election to fill the vacant seat of former Congressman Michael Grimm, a Republican who resigned after pleading guilty to a tax evasion charge in January, will be held on May 5. 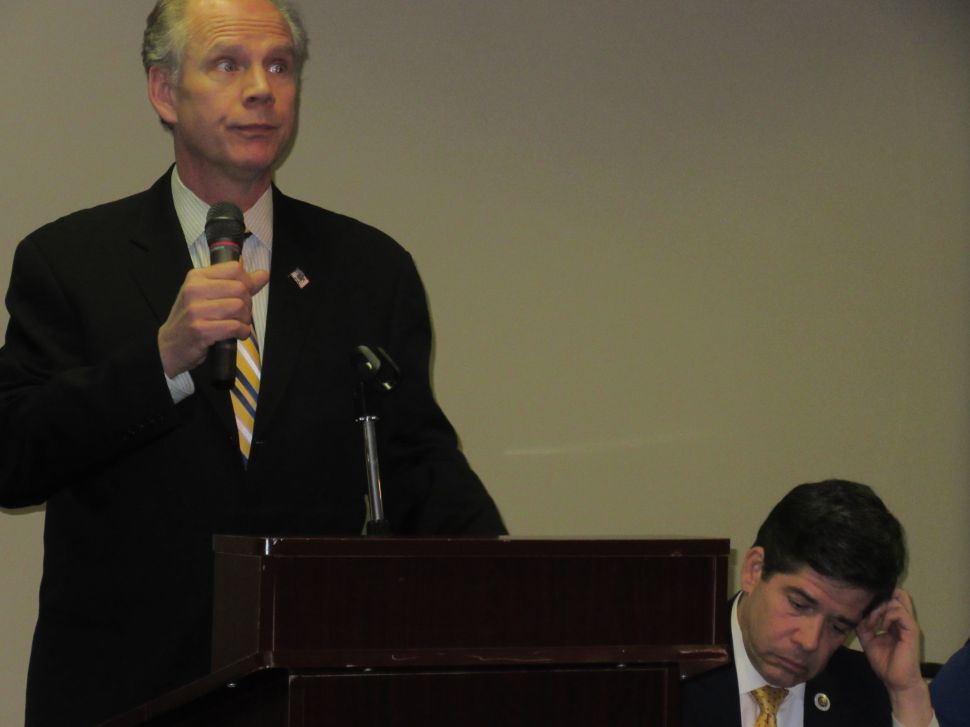