Everybody knows that a language never stays the same. Today’s English speakers could no more chat with an Old English speaker than a German speaker, and even people in old movies sound increasingly strange to us today.

Less intuitive is that this kind of change is driven, to a large extent, by women. Given that men have unfortunately always been disproportionately powerful in most societies, it is hardly unreasonable to suppose that language, too, jumps to men’s tune. Yet in modern societies, especially, the difference between how people talk from one decade to the next, is mainly due to what women start. Men just pick up the scraps.

One example is something utterly unnoticed yet spreading like kudzu: young women hanging an “uh” at the end of words and sentences. “How are you-uh!!” a woman might say on happily running into friends. “You have plenty of room-uh!” Sara Hyland’s Haley objected on an episode of Modern Family–and note that the “uh” surely wasn’t in the script; Ms. Hyland, as an American woman under thirty, subconsciously added it. I have also caught it from Gina Rodriguez on Jane the Virgin (“Shut up-uh!!” said playfully) and various young women on Broadway.

Just listen for it the next time young women are talking casually–or, if you are one, listen to yourself! American English has a new kind of verbal exclamation point, and women got it going. Or, there is “uptalk,” the tendency for people to make statements sound like questions. An iconic example: Alyson Hannigan character in American Pie with her “One time? In band camp?” tic. It sounds like questioning but actually enforces conversational clarity. With uptalk one ongoingly checks that you and the other person are on the same page. Questions can be like that–statements in disguise. When you ask someone piling on the salt “How much salt do you need?” you aren’t asking for an amount; you’re telling them they use too much.

However you feel about uptalk, it’s where the language has gone in terms of actual speech rather than Sunday-best language. It only took hold starting in the eighties. And research shows that women have been the main initiators.

We see the same thing in even under-the-board aspects of how people talk, such as a certain creaky tone that younger women are now using when they get to point they want to call attention to – not in a loud way, but just to mark it as the main point. It’s been called “vocal fry,” which sounds kind of grisly but it’s just that the voice sounds a little lower, almost grouchy, for a second. You’d know it if you heard it — as you can here in the third clip, on the word “1999.” Vocal fry is now so normal you might not think you’re hearing anything in particular, but then listen to the same National Public Radio journalist speaking 14 years ago, and note that she doesn’t ever use that “low burn.” I first noticed vocal fry in 2008 when a 19-year-old woman said “John McCain looks like he wants to make something out of (fry started here) iron-n-n.” Indeed, women started vocal frying. Today, a solid imitation of an American woman below a certain age should include the vocal fry whereas it wouldn’t have as recently as, say 9/11 or when iPods were first released.

The media have chronicled women’s leading role in language change here and there, but tend not to get the essence of it right. We read, for example, of women initiating “trends” in speech. However, any analogy with things like hemlines falls apart given that these trends often become, as it were, himlines–men pick them up, upon which we can truly say that the language as a whole has changed. Listening to my students at Columbia, I would be hard pressed to think of uptalk as feminine given that it is now as likely from a deep voice as a higher one.

Vocal fry is increasingly gender-neutral as well, and I’ll just bet we will hear men doing the “No-uh!” by around 2030 if not earlier. Things are the same with the “hedging” brand of like that drives many people crazy. Women, again, were the main initiators of sentences such as “We were, like, the only ones there” in the seventies. However, these days, in some of the ways that like is used as a “hedge,” men actually use it more. Yes, some of the many ways – from a linguist’s perspective, the new usage of like is as intricate as the operations of switch proteins on DNA. Listen to people using it and note, for example, that as often as not, it’s hard to hear like as indicating any kind of uncertainty. “I opened the door and it was, like, him!” Ultimately the new like is an elaborate ritual of politeness–and women started it. Men jumped on later.

Even calling this an issue of women “leading” the change distorts the matter, because women are doing this subconsciously. What makes its automatic nature even more interesting is that women even distinguish between two kinds of change and reject one of them. On the one hand, there is the question whether to uptalk or not or to “like” or not? Women went with uptalking, liking and uh-ing–and what all of those things have in common is that neither women nor men were aware of them happening. Obviously no one is teaching young women to say “No-uh!” instead of “No!”–linguistic fashions can be as arbitrary as culinary ones (why kale now?).

But on the other hand, how about: “them, these and those” or “dem, dese and doze”? “Singing” or “singin’”? Those differences are quite above the radar, associated with “low class,” and women do not embrace them. Those or doze? Singing or singin’? Women are more likely to choose those and singing. Of course it isn’t that women never use the “vulgar” forms; it’s a matter of degree. However, our intuition that men tend to speak less “correctly” than women has some basis.

Think of Tony and Carmela Soprano: Tony was more likely to say “dem, deze and doze.” Carmela was no stranger to such terms, but more likely to use them when excited; normally, she spoke in a more buttoned up way than her husband. James Gandolfini’s and Edie Falco’s renditions of the characters reflected linguistic reality. Men use the slangier forms more lustily than women do, but women do not pick them up and run with them, and so they are less likely to become everybody’s language.

The question is why, except for the vulgar stuff, women are so much more innovative than men in speech. Or maybe that isn’t the question. If the process is subconscious, it’s hard to call it decoration, especially when so many of these things are hard to see as linguistic barrettes.  Is vocal fry pretty? Are women saying “No-uh!” in a spirit of play and exploration? Doubtful.

The kale analogy is probably more useful. Like art, food has always been subject to trends simply because it’s inherent to human nature to drift into new habits, some of which catch on. Aspic then, kale now. “Goold” then instead of gold (people really did often say it that way long ago), “No-uh”! now. The question, then, becomes: why are men so much less innovative in their speech?

Men, it would seem, happily embrace the lowdown side of a language, but not to simply explore and play with it the way women do. We might ask what it is about being a man that makes you more reserved about talking in new ways unless they are the kinds we’re told are not proper. Notably, this linguistic sense of self corresponds to the fact that on the one hand, masculinity has traditionally been associated with reserve, and that also, men are more associated with resistance to authority than women.

It would seem, then, that women are not talking “like women” but just talking. It’s talking “like a guy” that’s different. “Guy talk” means talking down as a matter of jolly pride, but otherwise keeping language the way it is. Women are in the lead in changing the language because men don’t want to lean in and loosen up.

John McWhorter, who teaches linguistics at Columbia University, is the author of The Language Hoax: Why the World Looks the Same in Any Language. 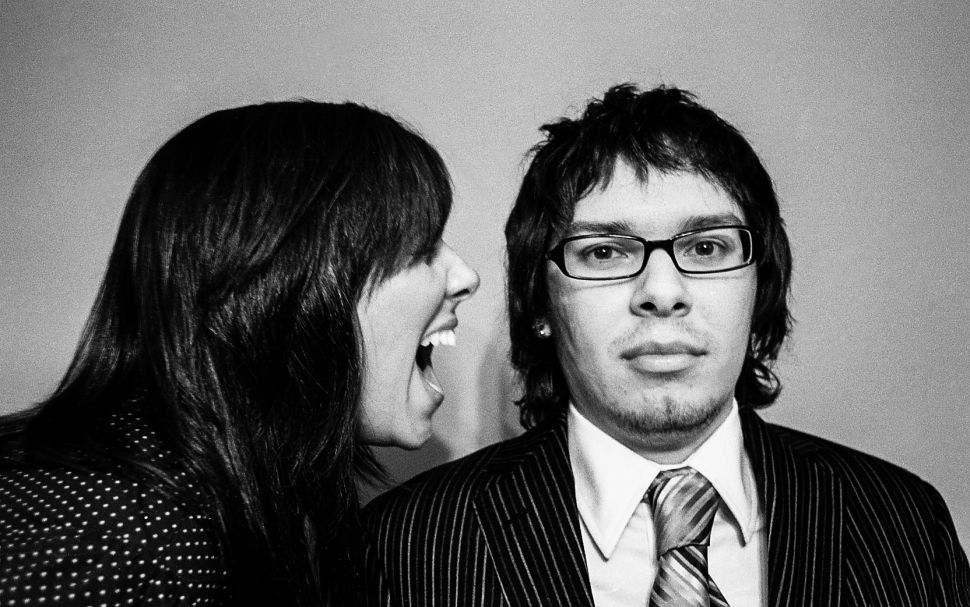