There’s a special time every year, a little before January, when the anticipated presents begin to arrive. No, these aren’t gifts bestowed by some patriarchal Santa-figure, but the HBO screeners for Lena Dunham and Jenni Konner’s dramedy GIRLS. That is what we’re calling GIRLS now, right? As the seasons of wunderkind/lightning rod Dunham’s show started piling up, the most legit complaint you could have about the show was that it, like its characters, didn’t know exactly what kind of program it wanted to be.

While it’s always encouraging to see HBO shows bend (and break) genre conventions, Season 4 of GIRLS, at times, seemed just…lost. The individual scenes of the show, some of the best TV writing out there, has never quite equalled up to a more compelling narrative in even its half-hour frame, let alone a whole season. And while this worked extremely well earlier on—that Patrick Wilson bottle episode comes to mind—this season especially had a flotsam, untethered quality that made it hard to know just how seriously you were supposed to take these characters. Hannah and her friends’ behavior seemed inconsistent to the point of absurdity: the once eager-to-please Shoshanna suddenly getting all Nightcrawler when offered a substantial job at Anne Taylor Loft, as well as her refusal to leave to the McKinsey offices until her interviewer listed all her deficiencies, or Marnie’s desire to shove her relationship down Ray’s throat to prove…what, exactly? That she could be cruel?

It would be easy to make the argument that it’s not unusual for even the best of us to become unnecessarily blunt and transparently manipulative during the tumultuous post-college landscape, but that’s a little beside the point. Plenty of shows bend with social interactions for cringe-worthy purposes, to great Seinfeld-esque acclaim. What felt untruthful, somehow, was the idea Shoshanna, who up until that point had been sweet and overly-concerned about how she came off–when her foot happened to get caught in her mouth, it was usually because she wasn’t able to shut it–could seemingly develop a cold kind of business sociopathy during the nine-month hiatus.

Yet you could totally see why these individual scenes of the New York gang were necessary, and added their own form of levity into an otherwise more devastating season of heartache. But that’s just the problem: the young women of GIRLS were suddenly kamikaze nightmares of human beings, yet the moment they were hurt or in crises, we were supposed to be able to—if not relate (*shudder*), to commiserate and sympathize. But the more these characters flattened into thinner and thinner caricatures of themselves with seemingly arbitrary motivations (Ray loves Marnie now? Really? After the extremely casual, and one might say healthy, way he put an end to their fuck-buddy status last season?), the harder it was to be present and invested in the series’ deep sense of pathos, grief and isolation that so clearly were driving the girls this season. How bad can you feel for someone who just refuses to compromise in any capacity?

Take the first four episodes of the season: a cynical toe-dip into the world of contemporary writers’ workshops as seen through the lens of Hannah’s brief foray into academia. The show didn’t pull any punches from seemingly criticizing the show’s creator as well as the character, but instead (or because?) of its very meta-ness, the Iowa writing scenes inspired that same toxic petri dish of contempt, indignation and utter loathing of Hannah’s “voice” in viewers that it did in her classmates. That seemed to be the point: Hannah’s “sorry not sorry” apology to the class, essentially blaming them for her writer’s block because she didn’t like their response to her “Trigger Warning” story, was met with such a barrage of hysteric vitriol about the author’s privilege and poorly disguised protagonist-as-self, that it was hard to believe the episode wasn’t just a direct reaction from Ms. Dunham to her legions of haters. (Except, as people have noted, Ms. Dunham wasn’t even the head writer on those episodes.)

This is where the show could have reached the point of no return…with, ironically, Hannah’s return to New York after dropping out of grad school. (She wasn’t going to be the group’s Lindsay Lohan after all.) The set-up of Mimi-Rose as Adam’s new, live-in girlfriend at first seemed like another entry for the audience into Hannah’s self-wrought misery.

But then about halfway through the season, GIRLS did something remarkable. It not only got back its wit, spirit and arch brilliance, but it did what no other season had yet managed to do: show these characters actually developing into functional, loving, flawed-but-at-least-trying, adult humans.

Mimi-Rose Howard was neither the home-wrecking villain or the (calmly self-possessed) manic pixie dream (lady) that Adam had projected her to be: she was her own, autonomous self. What made her such a good foil was that ability to know what she wanted—to have that abortion without asking Adam’s permission, to mend the bad blood between her and Hannah and living her life like someone giving a TED Talk about creativity. When she felt something for her (albeit creepy) ex-boyfriend Ace, she addressed the situation in the moment, instead of letting it become a festering wound. Sure, she was an asshole in her own way. But let’s emphasize that last part: she was purely herself in her selfishness, and made no excuses for who or why she was.

I like to think that Mimi-Rose inspired Hannah, as did the principal at her new school (which, by the way, was as implausible a vocation for Hannah Horvath as it was for Pryzbylewski on The Wire) when he lectured her about boundaries as she tried to confide in him about her father’s recent discovery of his homosexuality. At the moment, his words don’t to register—Hannah tries to change the topic by talking about how cute his clothes are—but the idea obviously seeps through later, as Hannah’s father shows exactly where his daughter got it from.

As he giddily prepares for his first night at the gay club with Hannah’s ex-boyfriend Elijah, the two bantering whether Hannah’s father would be a bear or a twink, our girl is finally able to comprehend what that word “boundaries” means. As proud as she is that her father came out of the closet—and she is proud, being the complete daddy’s girl that she is—her dawning resentment that a man might put his daughter, even a grown one (which, as he proved at lunch, is still not how he considered her) in such a compromised, confusing and complicit role against her mother while simultaneously, gleefully wrecking the foursome’s family unit for the sake of flirting with his daughter’s ex-boyfriend, is inexcusably selfish.

(It’s telling that Adam’s inadvertently cruel line to Hannah about his new relationship—”It’s not about you”—serves as a life raft as she comes to realize the same holds true for her father’s late-life decision to come out of the closet.)

Side-note: Was anyone else reminded of that scene in Transparent, when Mort/Maura hijacks Ed’s shiva and uses the time allotted to discussing memories of the deceased to monologue about her own personal struggles with coming out as trans? I mean this in the most complimentary way possible, but last night I saw what GIRLS could be like if it was as sure in its messaging as Transparent: that however strong our self-loathing, however much we feel consumed by our own solipsism and neurosis, our capacity for growth, for empathy and for selfless love is never fully out of reach for those willing to make the effort. Not for Hannah, and not for us. 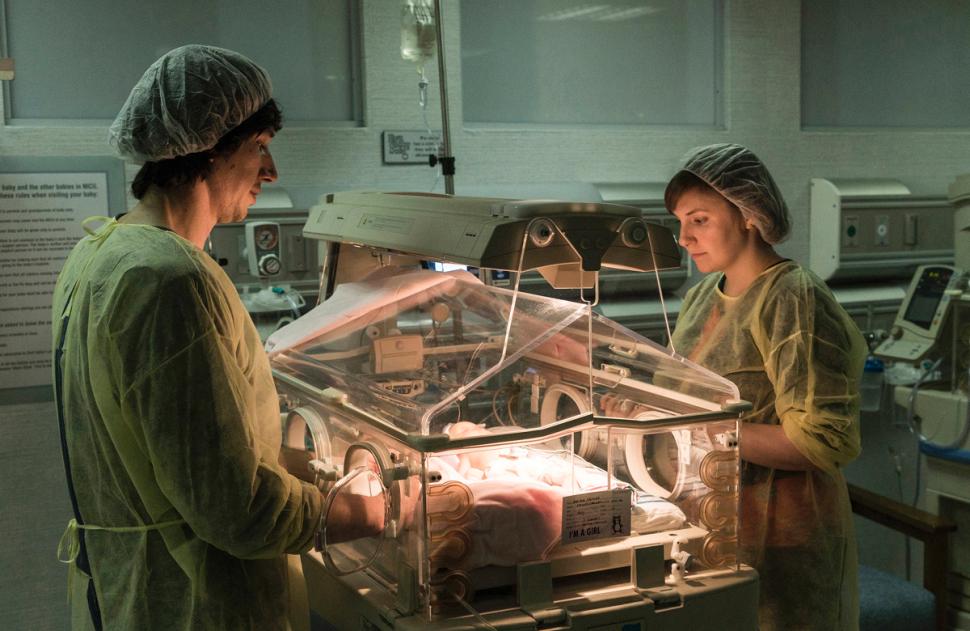