The show’s fast pace doesn’t often give us a chance to get to know the competitors as genuine, empathetic people, but this episode seeks to remedy that by eavesdropping on their reactions to Cameron’s elimination. In short, they’re all happy he’s gone and they spend the rest of the night talking about what a crap chef he was. Michael, who was also on the chopping block last week, lets loose a jubilant victory cry in celebration of being only the second-worst chef in the kitchen, and proudly proclaims his ability to bounce back. Such confidence! You’d be forgiven for thinking you’d accidentally tuned in to an episode of Top Foreshadower.

After a long night of shit-talking, the chefs hit the hay, only to be blasted out of bed at dawn by sous chef James and his air horn. Last time it was alarm clocks, this week an air horn…I guess Chef Ramsay spends more time coming up with different noises with which to wake up the chefs than actually developing new recipes for his restaurant. Rudely awakened, the chefs head outside to find Hell’s Kitchen transformed into a Winter Wonderland, as in “I wonder who thought this was a good idea.” Our contestants must plunge into two icy pools — one with fish heads, the other with fish tails — and try to piece together the matching halves. “I don’t like fish. They freak me out,” says Meghan, who might want to expand her comfort zone with bizarre, challenging ingredients like salmon.

The men prove more adept at fish assembly than the women, winning a headstart in part two of the challenge. “Whoop, there it is!” helpfully contributes Michael, whose face grows more and more punchable with each on-camera appearance. For the follow up, the chefs must use the seafood to create an original dish, to be judged by Gordon Ramsay and special guest Chef Michael Cimarusti, who pops up in the kitchen just long enough to collect his check. This turns out to be the most interesting moment of Hell’s Kitchen thus far, if only because it’s the closest thing to an actual cooking challenge we’ve seen this season. Not that we get any insight into the chefs’ process or technique, but at least they’re doing something creative. And surprise! The food, or what little we see of it, looks pretty decent. Even Adam’s risotto, because if there’s one thing we need more of on this show, it’s goddamn risotto.

This time, the ladies notch another arbitrary victory, earning them an afternoon of surfing lessons while the guys have to unload and clean all the seafood for that night’s dinner service. Amidst all the grumbling and bleeped complaining, ex-military man Randy manages to plunge a knife through his hand, not while descaling or gutting fish, but while literally wiping down his station with a rag. This may be the first schmatta-related injury broadcast on network reality television. For lunch, the men are served a tray of peanut butter and jellyfish sandwiches, leading to a delightful montage of grown men gagging, belching and near-vomiting. Once again, Hell’s Kitchen leads the way in food programming that makes food look disgusting. (On the bright side, all the retching gives me an opportunity to share this fantastic clip from the Dana Carvey Show with early performances from a couple of comedic geniuses.)

Dinner service proceeds as expected, by which I mean it doesn’t at all. In a shocking change of pace, this week the scallops are overdone and instead it’s a pork tenderloin that repeatedly arrives at the window still oinking. One diner receives an errant piece of plastic on his scallop salad, courtesy of Adam, who doesn’t realize the time for creative expression is over. But Chef Ramsay reserves most of his ire for Michael, who places a smoking hot pan under the fish station where it could easily be grabbed by an unsuspecting chef. Watching Michael stammer his apologies made me really, really, really wish Ramsay had just tossed the scalding oil in the guy’s face. I swear, I am not a violent person in the slightest, but this show does something to me.

In what passes for drama, both teams are banished from the kitchen. Chef Ramsay goes upstairs to continue screaming at the chefs in the dorms, for what he claims is the first time in the show’s 14 seasons. I can’t verify this, but if you’ve watched all 14 seasons of Hell’s Kitchen, please let me know, and then maybe take a long, hard look at your life. In the end, predictably, it’s Michael who is sent packing. Goodbye, Michael. I’ll miss wanting to punch you. 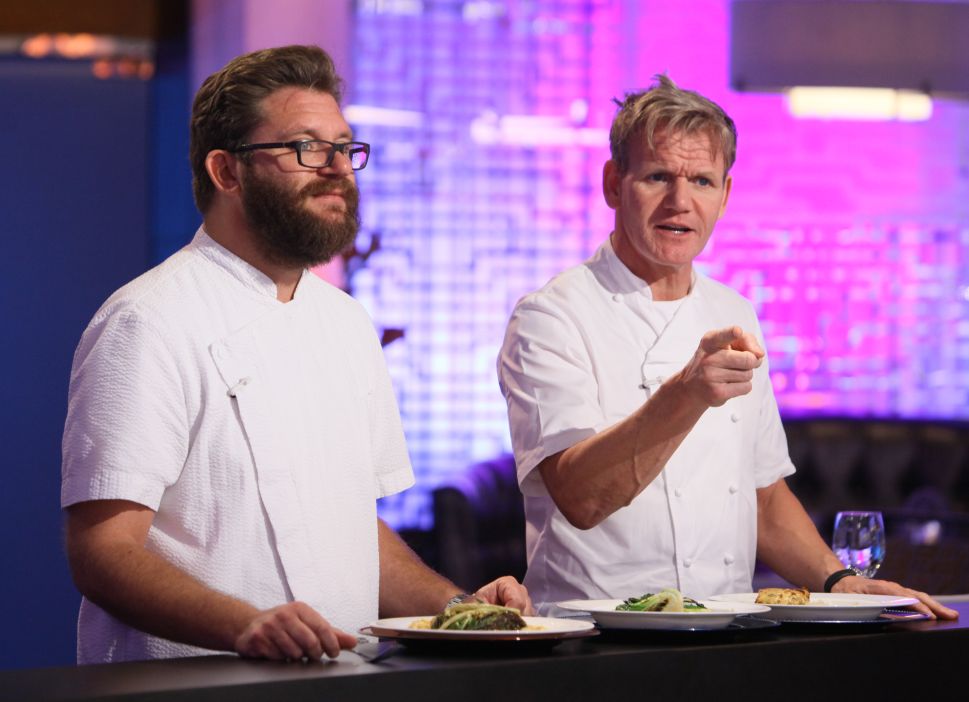