Okay, I admit it. I kind of enjoy the weekly morning-after montages of the remaining chefs talking smack about whoever was just eliminated. There’s something so crass and oblivious about it, I can’t help but smile. Unfortunately, that segment comes right up top, and afterwards, there’s a whole episode of Hell’s Kitchen to watch.

This week’s cooking challenge is “American classics,” so naturally it takes place on a football field, in celebration of America’s national pastime that isn’t baseball. Keeping with the general thematic coherence, Chef Ramsay presents the contestants with four “classic American dishes”: mac and cheese, burgers, pizza and spaghetti. (Those last two, of course, were popularized by Giorgio Washingtoni, who was famished after crossing the Delaware River in his gondola.) Now buckle up, because this is where it gets confusing. The teams split up into pairs, with each pair picking a dish. Then, a few dozen footballs are fired on to the field, each with an ingredient printed on it. Whichever balls the teams catch/collect/get hit in the head with, those are the products they’ll be allowed to use. But also, the chefs will be cooking individually, so the pairs aren’t really pairs at all? Except then each team only gets to serve one dish in each category, so then the pairs have to decide which one gets thrown in the garbage? It is needlessly complicated and incredibly tedious, especially once the ingredients are revealed. The women assigned to pizza push their creativity by grabbing footballs that entitle them to “mozzarella” and “tomatoes.” The guys doing mac and cheese are lucky enough to pick up the pasta ball. That’s gotta be bad news for the spaghetti team.

All of this is simply another opportunity for the chefs to show how ill-equipped they are to work with food. Randy, who’s on burgers, shrewdly surmises that Chef Ramsay wants “fancy-dancy” versions of the classics, and is therefore desperate to claim the bacon ball. He believes bacon makes everything better, and I believe that’s the most annoying food cliché of all time. Meghan, who last week declared her unease with fish, tells us that “comfort food is not really my forte.” Sarah, who at least seems nicer than some of the other chefs, if no less untalented, is baffled by her team’s ingredients. “Eggs and ham with spaghetti?” she pouts. Come on, Sarah, you’ve never heard of a classic, old-fashioned, American spaghetti carbonara? It’s what they ate at the first Thanksgiving.

This week’s guest judges are Los Angeles mainstay Suzanne Goin and giant cuddly koala bear David Burke, who patiently struggle to find nice things to say about the food. Burke, so charming and garrulous as a competitor on Top Chef Masters, is here reduced to insightful comments such as, “I like everything that’s in that.” Comparing two dishes, he says of his favorite, “I thought it was cooked a little nicer.” High praise. Frankly, Chef Burke looks like he might have been hitting the sauce backstage, and I don’t mean bolognese. The judges randomly hold up a series of red and blue flags, and somehow at the end of it, the women are victorious. This does not sit well with Bret, who has a full-on meltdown and flails around screaming profanities, making him only the most recent contestant to reveal himself as maybe dangerously unstable. We’ve already seen one chef threaten another with physical violence, and yet another laughingly contemplate suicide. I know these shows always have a medic standing by, but for all our sakes I hope they also have an on-set psychotherapist.

Anyway, the guys chop onions while the girls get to go on a boat ride in Long Beach. It seems nice.

This week’s dinner service is a special one: it’s Family Night at Hell’s Kitchen! As if eating at this non-restaurant were not unpleasant enough, tonight diners get to do it while surrounded by children. In honor of the occasion, the dining room is filled with carnival games, in the misguided hope that the clanging of a Skee-Ball machine might drown out Chef Ramsay’s foulmouthed tirades. Nope. Sorry, parents, but your little ones are leaving Hell’s Kitchen tonight with some colorful new vocabulary words. On the upside, there’s no better time to finally have an honest conversation with your kids about undercooked scallops.

Dinner service is as expected. “I got this,” says Michelle, before getting screamed at for oversalting her pasta. “I got this,” declares Bret, before getting screamed at for dumping an old batch of risotto into a fresh pan. No, guys. Nobody got this. Sarah puts out a burger that is essentially raw ground beef on a plate, later explaining to her teammates, “I don’t know how to cook burgers.” Such is the level of culinary expertise among the contestants. Something tells me the season finale will be won by whoever can make a bag of microwave popcorn without breaking a limb.

This week, the red team gets booted from the kitchen, thanks to Mieka and Monique tanking the meat station. In what passes for a shocking twist, the women decide to put Sarah up for elimination, anticipating that she’ll be saved and the team can finally get rid of Monique, who nobody likes. But surprise! Ramsay plucks Mieka out of the peanut gallery and sends her home anyway. Sorry, gals. Not only can’t you cook, but you can’t strategize 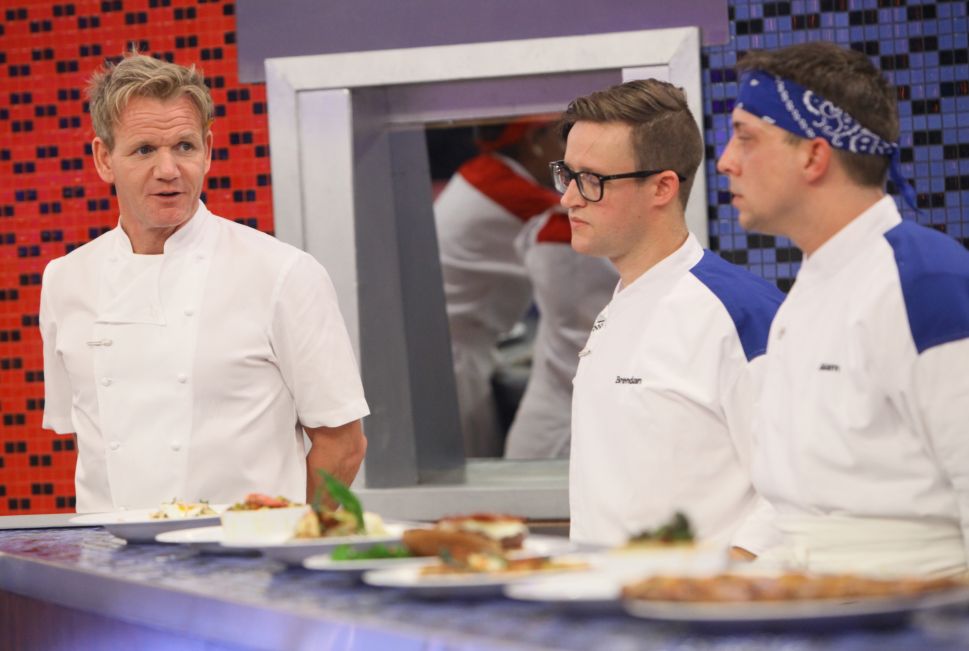