From behind the windows of their  Georgian-style home on the south side of East 70th Street, between Park and Lexington Avenues, the Irish businessman and his wife always admired the place across the way, a townhouse newer than theirs and twice as wide. It also boasted a white-balustraded terrace on the third floor, so that the rooms above took light through eastern windows, a near-unheard-of rarity in a mid-block Manhattan home.

Anthony White had made a mint in the data-collection business and his wife, Clare, had a way with antiques. But the couple across the street, who’d had their house designed in the mid 1960s, were of a different order: Paul Mellon, heir to the banking fortune, and his socialite-par-excellence wife, Bunny.

A longtime friend of the Kennedys, Ms. Mellon was an expert horticulturist, and had brought her talents to bear on the White House Rose Garden, as well as on the rear garden of the townhouse, which had a reflecting pool and a gazebo, and which was overlooked by the library, where Mr. Mellon displayed selections from his world-class collection of English paintings.

Mr. Mellon died in 1999, at the age of 91, and when Ms. Mellon felt ready to sell the place, in 2006, Louise Beit, a broker with Sotheby’s International Realty, helped arrange for the Whites to move in, at a cost of $22.5 million.

The Whites had made not-insubstantial alterations to the Mellons’ vision when they enlisted Ms. Beit once more last year, putting the townhouse on the market for $41 million. But when it came time to market the home, it was for the Mellon name that Ms. Beit reached.

“I think any broker would have realized the value of a provenance like the Mellons and gone straight for that,” Ms. Beit told the Observer. “The home was built for them, and so it shows their lifestyle, their particular way of living. The house was built to reflect their passions. And, of course, they could have afforded anything.”

The home’s lineage, Ms. Beit said, helped to attract potential buyers from around the world. “That’s one of the things that we ask when we are determining the value of a property: How unique is it?”

That a home built for beacons of wealth and taste of the Mellons’ stature would exert enduring allure is perhaps unsurprising. (It eventually sold for $37 million to Jim Clark, a co-founder of Netscape.) But in a town famous for both real estate obsession and official indifference to celebrity, the precise appeal—and monetary value—of property connected to bold-faced names can be difficult to suss out.

“Pay more for an apartment just because so-and-so lived there?” one broker sniffed. “I don’t think people do that anymore. Maybe if we were talking about Beverly Hills it would be more of a factor—they care more there about saying they live in so-and-so’s house.”

Others aren’t quite so dismissive. “When it comes to real estate, there are bona fide legends, A-list celebrities and then there’s everybody else,” said Karla Carrington, a broker with Bond New York. “There are people who will buy John Wayne’s house just because it’s John Wayne’s, just to take a bath where John Wayne took a bath. If Beyoncé’s moving out, people are going to flock.”

Ms. Carrington estimates that an owner falling into one of those categories from which “everybody else” is excluded might get a 20 to 50 percent premium on the sale of her home. But that represents a perhaps excessively enthusiastic appraisal, particularly in this, our era of the Wall Street superstar. “Will people spend more on Jay Z’s apartment?” wondered Karla Saladino, a managing partner at Mirador Real Estate. “Probably. But honestly, New York is so finance-based now. I haven’t seen too many examples where celebrity owners push the price up that much.”

To wit, Ms. Saladino recalled—with lingering frustration—trying to rent an apartment where David Bowie and Iman once lived. “It didn’t move, really, because there were cheaper things in the building,” she said. “It was novel. There was her dressing room, and this and that. But people would say, ‘Well, yeah. But there’s a view available [in another unit].’ ”

Indeed, city records are dense with deeds for celebrity homes whose closing prices fell well below the hoped-for figures.

There was that Barbra Streisand triplex at the Ardsley, at 320 Central Park West, reputedly suffused with the smell of stuffed cabbage—a favorite of Ms. Streisand’s son—that stayed on the market for five years before selling in 2002 for around $4 million, $6 million less than the original asking price. (Barbara Fox, the president of the Fox Residential Group, who had the listing early on and later represented the buyer in the deal, told us that the new owner “couldn’t have cared less” about the co-op’s Broadway bona fides.) Then there was the listing for Gloria Vanderbilt’s former home, a mansion at 39 East 72nd Street, that stagnated for nine years, peaked at $24 million and sold for $5 million less than that in 2014. More recently, there was the Soho penthouse at 76 Crosby Street belonging to Kelly Ripa and her husband, Mark Consuelos, which sold after nearly two years on the market for $4.5 million less than its $24.5 million asking price, to a real estate type who seemed unmoved by Ms. Ripa’s residency.

Still, Ms. Fox allowed, celebrities who are truly au courant might be able to bump their listings something like 5 or 10 percent. She recalled representing the buyer in the 2012 sale for $6.6 million of Alex Rodriguez’s 80 Riverside Boulevard apartment, which he’d purchased just a year earlier for $5.5 million. “People like to say, ‘I bought A-Rod’s apartment,’ ” she said. “Or, they say, ‘Oh my God, this is how so-and-so lives—that’s good. I think that would be good for me.’ ”

But that only works, of course, if sellers are willing to advertise their connection to the merchandise, which, brokers say, a great majority of name-brand owners are not. “My celebrity customers don’t generally want to be recognized,” said Corcoran broker Linda Feder. “For example, I have a listing now for a celebrity and I recently had to say no to a reporter who asked to talk about it. We’re always renting under maiden names, or buying as LLCs.” (Bunny Mellon sold her home on East 70th Street under the auspices of a company named for the rural Virginia estate where she spent most of her time.)

“Truthfully, there’s always a battle between going for exposure, vs. keeping it as confidential as possible,” noted Daniel Hedaya, who is president of Platinum Properties. “I typically say that if it’s a name that can be recognized without Googling then, if the client is O.K. with it, we should advertise it.”

And there are, too, the estate sales, the most glittering current example of which must surely be Lauren Bacall’s nine-room apartment at the Dakota, which entered the market for $26 million last November, following the star’s death last August.
Ms. Bacall bought the co-op in the 1960s for less than $50,000. And given that the apartment drew a market appraisal in the neighborhood of $9 million near the end of Ms. Bacall’s life, we have to guess that Rebecca Edwardson, the Warburg Realty broker who has the listing, hopes that residual glamour—perhaps in the form of cigarette smoke and spilled bourbon—will have buyers feeling more generous than they otherwise might. (Ms. Edwardson did not respond to the Observer’s request for an interview.)

Apartments inhabited by legends of the silver screen are increasingly hard to come by. But anything that places a home in the continuum of the city’s history can create allure. And familiar characters—even vaguely familiar characters—can be helpful.

Jeff Schleider, the founder of Miron, fondly recalled the recent sale for $600,000 of a modest place once occupied by a young, pre-superstardom Julia Roberts, back when she was dating Dylan McDermott. David Gomez Pearlberg, a broker with Town Residential, remembered selling an Upper West Side apartment belonging to a young Broadway actress—her first New York apartment, he thought—to a couple who were great fans of hers, and who discovered the unit’s provenance during an open house.

“She had a show up at the time, and they went and saw it three times before they put in an offer,” Mr. Pearlberg said. “It’s a great story and it’s a piece of history. It’s something that I think everybody loves—to have a connection to something they care about.”

But not all histories are created equal. We asked Barbara Fox about the Manhattan holdings of the reclusive copper heiress Huguette Clark, who shared an era and a social class with Bunny Mellon, even as their lifestyles diverged. (Despite relative good health, Ms. Clark took to a hospital bed for her last 20 years and died in 2011, at the age of 104; Ms. Mellon, three years later, aged 103.) Some years ago, Ms. Fox had visited Ms. Clark’s three co-ops at 907 Fifth Avenue, a luxurious J.E.R. Carpenter-designed limestone edifice built in 1915, to give them an appraisal. Ms. Fox marveled that “everything was totally in place like she was going to walk back in at any minute,” but she didn’t think the owner’s reputation would elevate the sale prices.

Much has been made in recent years of Ms. Clark, who also owned mansions in Santa Barbara, Calif., and New Canaan, Conn., and we wondered why that was the case, if the owner herself didn’t stoke buyers’ interest.

“Well,” Ms. Fox said, as if the answer were the most obvious thing in the world. “She had great real estate!” 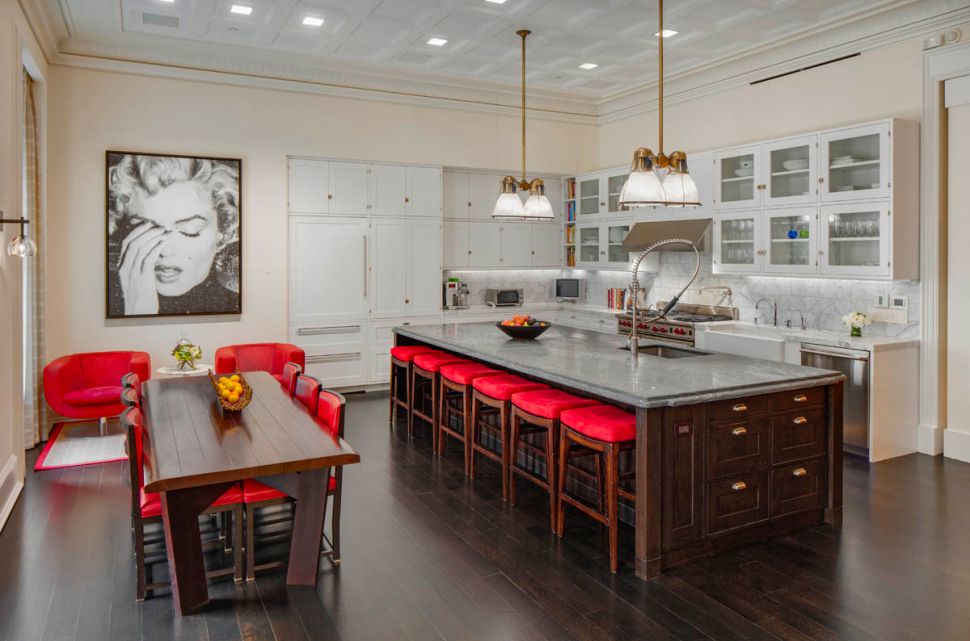