Al Pacino has never been any good at comedy, and sentimentality is not his forte. Attempting both in Danny Collins, he’s so far away from his comfort zone that it comes as a shock to confess that I find it his best work in years—good enough to sweeten the bile left by his last 10 flops, most recently the disastrous The Humbling. (An old ham actor ready for suicide falls in love with a young lesbian? I don’t think so, and neither did anyone else.) A first feature directed by Dan Fogelman, who wrote Crazy, Stupid, Love (fresh) and the Barbra Streisand vehicle The Guilt Trip (despicable), Danny Collins is nothing to write home about, but it kept me entertained without too much guilt, and I didn’t wince. By today’s American movie standards, that’s becoming very high praise indeed.

Danny Collins (Pacino) is a has-been rock star from the Nixon years that once had promise. He hasn’t written anything important in decades, but some of his catchy schlock is still cherished by his fans, now an audience of finger-popping, weaving, waving senior citizens. Danny hates his hit tunes, the way Lesley Gore hated “It’s My Party” and Rosemary Clooney hated “C’mon-a My House,” but he’s too lazy to write anything new, so he still gives the public what it wants. He’s made millions; he lives in a house begging for an Architectural Digest cover, replete with zebra rugs, a glass elevator, polished wood floors, enough blonde bimbos to guarantee the beds never get cold and enough coke to prove he’s financially solvent.

But Danny is miserable. He once made an album of innovative pop tunes nobody bought, so he gave up and stuck to unoriginal songs made famous by other chartbusters. Now in his 70s, the feeling he’s a fraud comes full circle with the sudden discovery of a rock-and-roll artifact in the form of a fan letter from his idol, the late John Lennon, who heard his album and was very impressed. Written in 1971, the letter was sold to a collector, and is now presented to Danny as a framed birthday present from the past. It’s a gag gift, but the fact that it predicts a creative and profitable career for an artist who was adored by the most famous member of The Beatles has a profound impact.

Overwhelmed, Danny decides—against the advice of the long-suffering manager who has raked in his 10 percent since the American Bandstand days (another great, three-dimensional performance by Christopher Plummer)—to throw in the towel, flush the drugs and turn over a new leaf. The plot is so preposterous it’s hard to believe it claims to be based on a true story. Your move.

The road to redemption begins when Danny cancels his next tour, closes up his mansion in Beverly Hills and moves to a suburban Hilton hotel in New Jersey near a modest house that belongs to his estranged son from a one-night stand he hardly remembers. It’s not the kind of family reunion Danny dreamed about, which you used to see on Oprah.

Grown son Tom (a terrific Bobby Cannavale) is a construction worker, denied the privilege of education and ignored his entire life by a rich and celebrated father who deserted him as a child. He won’t have anything to do with the father he detests. His pregnant wife Samantha (Jennifer Garner) and precocious little daughter Hope (Giselle Eisenberg) are more sympathetic to Grandpa. They inspire Danny to stop singing the same old crappy songs just because they were hits, live up to his original potential and rekindle his inert career.

To this end, he is also helped enormously by the pretty, pragmatic manager of the Hilton, played with more charm than the role deserves by Annette Bening. Danny even books a gig in a small lounge to show off his new, more sophisticated songs—which is ridiculous, of course. Think of Bruce Springsteen at the Holiday Inn. When his fans show up on Medicare and demand the old hits, Danny caves and gives them what they want, reversing all of his progress in one night. But this is the kind of movie that seems sponsored by Hallmark Cards, so all is forgiven when Danny starts writing checks to send Hope to an expensive school for special needs kids and save Tom from dying of leukemia. It could only happen in New Jersey.

The script eschews the occasional drift toward more meaningful themes to spread joy when it is least credible. Danny has serious problems resulting from guilt, shame, many broken marriages, the neglect of his only relatives and 40 years of self-destruction, but none so challenging they can’t be solved by a gruff grin or another bear hug. Curiously, he is never forced by Mr. Fogelman’s screenplay to face his own demons, so it’s up to everybody else to change. He’s a bastard and a deadbeat dad, but the movie makes him too lovable to give up on. Mr. Pacino works overtime to achieve that goal. But the rest of the cast seems underused to the detriment of credulity. Die-hard Pacino fans will undoubtedly curdle watching their rough-hewn hero’s conversion to uneasy charm. But anyone who believes his talent peaked a long time ago might warm to an agreeable side of Mr. Pacino seldom seen—sweet and soft as a frozen custard. 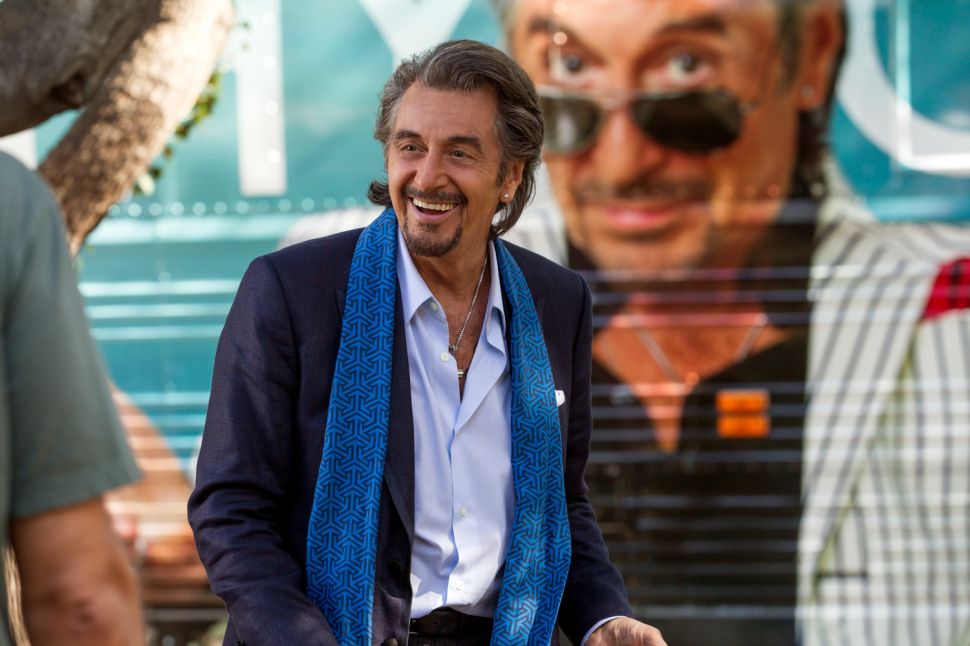