I have the privilege of being a Greek Orthodox priest from Nazareth in the Galilee. My people have mistakenly been called “Christian Arabs,” but the reality is that we are Arameans, descendants of people who lived here in Israel since the time of the Bible.

Following a lengthy public campaign, Israel’s Interior Ministry has recently recognized us as the “Aramean nation.” Partners in this effort were a number of Israeli Zionist organizations.

Over the past three years I have become a controversial figure in Israel for the simple reason that I embrace Zionism, Jewish sovereignty in Israel, and the tolerance, respect and opportunity for all that have grown out of that sovereignty. I believe that our youth—Christian youth—should fully integrate into Israeli society. Part and parcel of that integration includes serving in the Israel Defense Forces (IDF), Israel’s Army, or undertaking some other form of national service that Israel routinely provides for teenagers.

In 2012, a few Christian IDF officers and I founded the I.C.R.F.–the Israeli Christians Recruitment Forum. My efforts have had mixed results. On the positive side, hundreds of Arab or Aramean Christian youth have heeded my call and have served their country with distinction. They have been embraced by their fellow soldiers, who regard them as comrades in arms, and not as strangers in their midst.

On the downside, the blowback from my efforts among rejectionist elements in the Christian and the Muslim Arab communities has been intense. Christian soldiers have been harassed by their neighbors, and in many cases, by their own families. These soldiers are forced to change out of their IDF uniforms before returning into their hometowns, for fear that they may be harassed on their way home.

Another example came in 2012, when a conference was held in Nazareth by supporters of Christian recruitment to the IDF. A local leader, attorney Abir Kopty from the Mossawa Center, attacked the participants and accused them of Palestinian persecution. Mr. Kopty also suggested that integrating Christians into the army was an attempt to divide Arab society in their national struggle against Israel.

Following the conference, a campaign of harassment began against the conference’s organizers. Students who participated were threatened, isolated and suffered humiliation via social networks and in the Arab media. An Israeli organization that supports us, Im Tirtzu, subsequently published a report detailing statements made against Christians who encouraged Christian enlistment in the IDF.

For me personally, my conviction and actions have led to numerous death threats, my ex-communication by the Orthodox Church Council and the prevention of my entrance to the Church of Annunciation.

None of this has anything to do with the Israeli government or the Jewish community. The assertion of Israel as a so-called Apartheid state is complete nonsense. My successes and challenges speak loudly as to where the real problems lie for my fellow Christians.

It pains me to say this, but it must be said. The incitement against me, my campaign, and all those Christians who have sought to integrate into Israeli society has been led by Arab leaders from Israel and abroad and even by some Arab members of the Israeli parliament, the Knesset.

MK Hanin Zoabi wrote to me on official Knesset letterhead and accused me of “helping the enemy of the Palestinian people,” “collaboration with occupying forces” and pressured me “to fight against the loyalists of the regime.” Of course, all this creates an atmosphere of incitement against anyone who is interested in integrating the Christian minority into the national service frameworks in Israel.

But these people have had help. Under the guise of human rights protection, organizations such as Mossawa—which is funded by the New Israel Fund—joined the incitement campaign and have accused the leaders of the Christian-Arab community in Israel who support integration of collaboration with the IDF.

A blacklist of priests and Christian leaders who support integration and cooperation with the State of Israel has been compiled, and pictures of leaders and youth who participated in IDF events have made their way into the Arab press, endangering their lives and encouraging violence.

Mossawa is not alone in trying to deny Christian Arabs the right to integrate into Israeli society. A coordinated campaign against enlistment of Israeli-Arabs to the IDF was led by other organizations as well.

This campaign included massive pressure on the Israeli and Arab press, including a set of articles published on the +972 website in 2012 denouncing Arab enrollment in the military or national service; school activities that are intended to educate children not to serve the country; or the efforts of Baladna, an NGO that has worked for many years among the Arab youth in Israel, teaching them about the “threats” implicit in serving in national service or the IDF. Adalah is working to prevent military veterans from receiving housing benefits in Arab cities.

Organizations that are participating in the campaign to try to stop the Aramean community from integrating into Israeli society via army/national service include Adalah, Mossawa, Baladna, +972 and others. They are Israeli nonprofit organizations—some are composed of Israeli Arabs and others are on the extreme left and anti-Zionist. These NGOs reject Israel as the national home of the Jewish people. They would like to cancel the law of return and remove the Jewish character of Israel.

They would reject the special status of the Hebrew language, modify the national flag and the national anthem and make Israel a bi-national state. These organizations call on the Arabs of Judea and Samaria and the Arabs living in Israel to come together to fight against Zionism. Because of that, the idea that one group has separated itself from this struggle by identifying itself as Aramean is, for them, anathema.

All of these organizations claim that they are fighting for the weak, for the minorities who cannot stand up for themselves and demand and fight for their own rights. But ultimately, the actions of these NGOs beg the question of what rights they are really fighting for, whose interests they are protecting and what their real agenda is.

Clearly, these NGOs have no interest in seeing Christian Arabs become part of Israeli society. Much like the Arab countries that have used Palestinians in various refugee camps as pawns in fighting the State of Israel, these NGOs are content to reduce my community to cannon fodder in their efforts to de-legitimize Israel.

So my community is effectively being told to fight for their continued marginalization by Israeli society, even though it is the Israeli government’s goal to bring them more fully into the mainstream. Doesn’t the Christian community deserve the right to follow our own will and integrate, if it so chooses, into Israeli society? Not according to most of the NGOs that say they are assisting our community.

As a priest, I am distressed by this unwillingness to promote the welfare of individuals in the name of a monolithic group identity, whose goals and objectives can be set by those who might have very little in common with the community they supposedly represent.

As Christians in Israel survey the situation of our brethren in the wider Middle East, we are appalled by the persecution that so many have experienced in Egypt, Syria and Iraq, among others. Truly, it has only been in Israel where Christians can fully practice our faith and can be productive members of society.

We are not interested in misguided policies that would only bring harm and dislocation to us. Instead, we see and appreciate the opportunities to live full Christian lives in the Jewish State.

It is important that Christians around the world understand that Jewish Israel has been a responsible steward for its Christians. We should be supported, and not demonized for our efforts to more fully join this benevolent society.

Father Gabriel Naddaf is the spiritual leader and one of the founders of the Forum recruiting Arabic-speaking Christians to the Israel Defense Forces. He is the Spiritual leader of the I.C.R.F. and the Christian Empowerment Council. 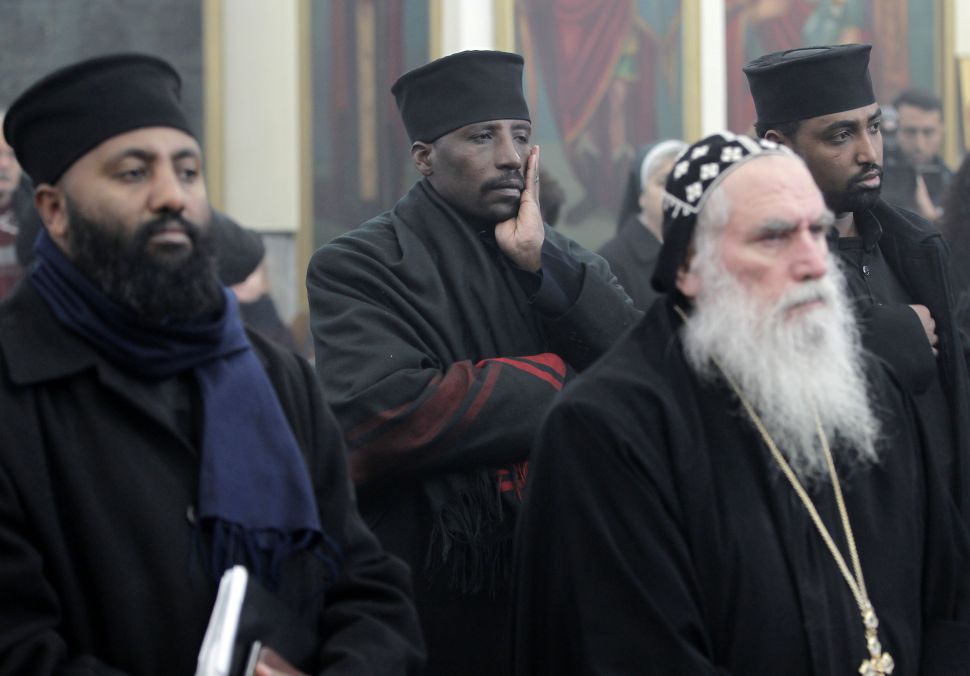