It seems foolish to attempt a review of Kate Tempest’s Wednesday night show at the Mercury Lounge, in support of her 2014 record Everybody Down. There is nothing anyone can type that will do her work justice, and I’m delighted that no one has tried any cheap wordplay on her last name as it relates to her expanding global success.

I’m not alone in considering Kate to be a lyrical genius. In 2013, at the age of 27, she won the Ted Hughes Award for her work Brand New Ancients. I had the pleasure of seeing that show live at St. Anne’s Warehouse and later was fortunate to be handed the task of mixing the album version of it. But while New York was getting introduced to Kate (and the rest of the country by virtue of universally fawning press, including an interview with Charlie Rose and a feature in The New York Times), her mind was already on the new album which was about to be released.

“Everybody Down” pairs her heartfelt, raw and honest story telling with thumping beats and intense rhythms provided by producer Dan Carey (aka Mr. Dan), whose list of credits is as long and interesting as a Kate Tempest work. The fact that Dan was onstage with Kate for this tour (along with an impressive array of synth and drum machines) made it extra special.

Fresh off her shows at SXSW, she took the stage and excitedly explained that without NYC and the rap music she grew up with, she wouldn’t be doing this right now. She speaks almost evangelically about love and empathy, and insists the audience send all of their pain and heartache her way because she can take it. She reminded everyone in the room that whether they know each other or not, tonight they are all friends. The audience, packed shoulder to shoulder straight back through the bar, was in full agreement.

Mercury Lounge is not a huge venue, yet the performance felt larger than life. The club is known for its excellent sound system, and Kate’s mixer, Alex Gent, really made it shine. Bass for days and synths that surround you, all the while Kate cutting through clear as a bell. Her energy was contagious and she, along with singer Anthe Clarke, didn’t miss a beat. The group performed the majority of her Mercury Prize nominated Everybody Down, while changing things up a bit for this set.

Launching straight away into spoken word delivery of “A Hammer” before the band joined in to back her, the set brought back memories of seeing Brand New Ancients, where large passages of dialogue would be punctuated by musical interludes. But those moments where the band bowed out leaving Kate alone at the lip of the stage staring directly into a welcoming crowd made the musical entrances that much more powerful. It was in those quiet moments that I could hear the guy behind me gasping “Oh god! OH MY GOD!”- clearly moved by the words. It should be noted that that particular fan had flown in from Michigan just to see this show.

Where the music in Brand New Ancients was melodic and pensive, the music from Everybody Down forces you to move along with it, while still being every bit the intense, precisely delivered poetry you’d expect from Kate. A standout of her ability to hold rapt court with the best of them was evidenced on “Chicken,” where the smile on her face at the fastest moment of the song seemed to express “I got this!” Likewise, you could detect her bliss during “The Beigeness,” her most recent record’s best-known song, while she stepped back and seemed to soak up the rhythm from the band.

Other standouts were “Circles” with it’s relentless groove, and “Happy End,” which Kate declared was the darkest song from the album. Down and dirty with an almost stabbing and haunting synth punctuating the storyline.

As if the crowd were not utterly floored by the show, Kate returned to the stage at the suggestion of Dan to deliver one last shot. She made it clear that this was not some cheap stunt bands often do… premeditated encore material. This was just her gift to the audience. One last spoken word piece of Kate to drill home the idea that we all need more empathy.

If you missed her area performances this week at the Mercury Lounge in NYC or Rough Trade in Brooklyn, or even her event at Word Bookstore in Brooklyn, fear not—she’s returning in June. I’ll be there, iPhone camera in hand and all ears. 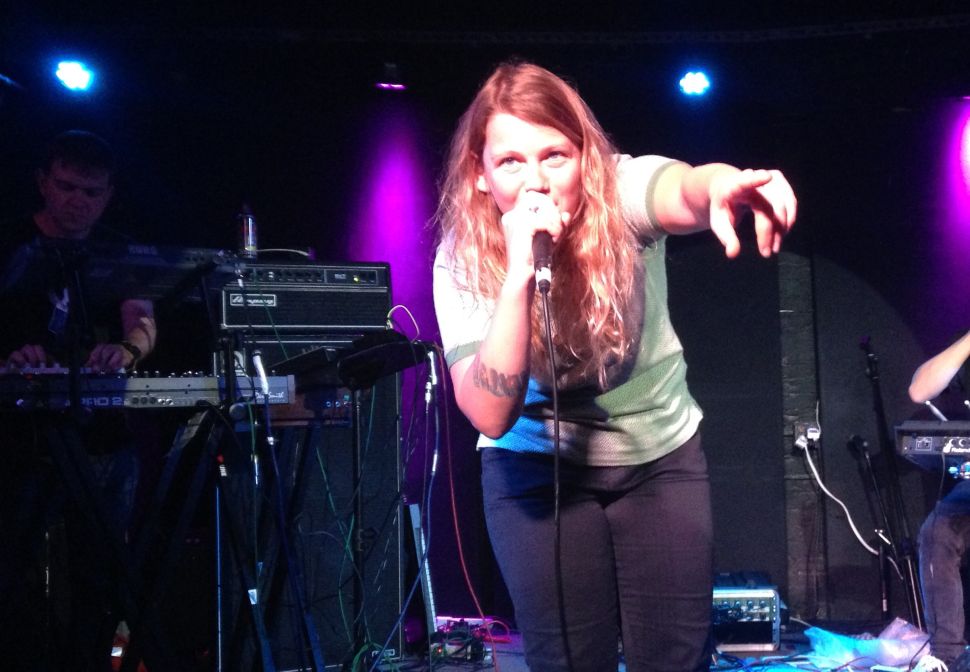