At some point during my conversation with Kevin Bacon two weeks ago, in which I mostly peppered him with questions about Hollow Man, I eventually realized that the movie Hollow Man came out more than a decade ago and I should probably mention his role of Ryan Hardy on The Following.

At this time I had already seen the first two episodes of season three, so I knew the sheer absolute horror that was the end of tonight’s episode, ‘Boxed In.’ The promotional materials for season three have all been asking the simple question most famously screamed by Brad Pitt in Seven, “What’s in the Box?” Tonight we found out the answer to that question is Agent Jeffery Clarke. He is in the box, because Erroll Childress from True Detective stuck a cow knife in his skull, folded him up like an accordion and stuffed him in a box that, quite frankly, did not look like it accommodates people.

I asked Mr. Bacon about The Box, and by that I mean I just said “That fucking box, man,” because I’m a professional. He laughed, and managed to put a human spin on the episode’s finale while still using the word gnarly.

“When I first saw a picture of what the box looked like, I thought ‘wow, this is just great. This is going to be gnarly,'” he told me. “But I got to tell you, to me the box only works because of Felix [Solis] and my feelings about him. To me that’s what it is to Ryan [Hardy]. It’s this profound, deep loss of this agent he had gotten to know. I got a chance to play a couple of important scenes with him. We had a connection, and he’s an actor that I really adore.”

In fact, Mr. Bacon somehow managed to put a deeper spin on all of The Following’s blood, guts and stabbity-stabs, of which there are plenty per episode. We addressed what I feel is the biggest flaw in an otherwise great show — the incredibly high body count amassed by the shows heroes. At this point, you are more likely to be killed in New York by Ryan Hardy than the flu (provided you are a cult member and/or serial killer).

“Ryan has killed so many people, and he has seen so many people killed,” Mr. Bacon said. “There is a large element of blood on his hands, and I felt there had to be both a kind of retribution but also a haunting that he was unable to escape.”

But where there is haunting, there might also possibly be light. We were introduced to a new Ryan Hardy love interest last week in the form of Gwen, a female that has gone more than one episode without betraying or stabbing Ryan, which bodes well for their future together.

“Gwen is, in some ways, the first woman character that I really should be with,” Mr. Bacon said. “Natalie [Zea, who played Claire Matthews] was fantastic, I loved playing scenes with her and she’s gorgeous and dynamic and all that stuff, but she was the wife of the serial killer. So, maybe not the best choice. Then you had the Carrie Cook character who, again, sexy and smart, but she was also a tabloid journalist that had written a tell all book about me. And the third one was my neighbor, who I was fooling around with when I was drinking, and turns out she’s one of Joe’s followers and puts a camera in my room. To say I’ve made some bad choices in my love life would be an understatement.”

He has a point. The Gwen character is a unique one to The Following, a character in Ryan’s inner circle that appears to want no part of the Joe Carroll or Gray family cases. I say “appears to,” because The Following’s track record has taught us there is no way Gwen is not secretly in a cult. Any cult, really.

In fact, I spent most of my time on a recent trip to The Following’s Brooklyn set begging actress Zuleikha Robinson to tell me if her character eventually turns cult-y. She was especially tight-lipped because, well, duh she’s not just going to tell me. But I’m on to you, Robinson. I’m on to you.

(Other exclusive dispatches from the set of The Following — the name ‘Ryan’  is spray-painted in red in various wooden locations which is most likely a crew member testing the paint but also likely that Fox itself is a cult. Also, Ryan Hardy has an Avril Lavigne CD in his apartment. What do you think his favorite song is? Do you think it’s “Complicated?” I bet it’s “Complicated.”) (Ed. note: “Sk8er Boi,” absolutely.)

As for Mr. Bacon, all the boxes and love interests and Avril Lavigne CD’s mean nothing if they don’t lead to a deeper understanding of character. Because that’s just the kind of actor he is, be it in The Following or, say, 2000’s underrated sci-fi smash hit Hollow Man.

“As an actor, I do enjoy coming around corners in dark halls, and chasing people and fighting and all that,” Mr. Bacon said. “But, really, what I’m good at as an actor and what I’m drawn to is, what is the emotional complexity of what is going on in this person’s life? And I think I got a lot more of that this season as Ryan. It’s going to be great.” 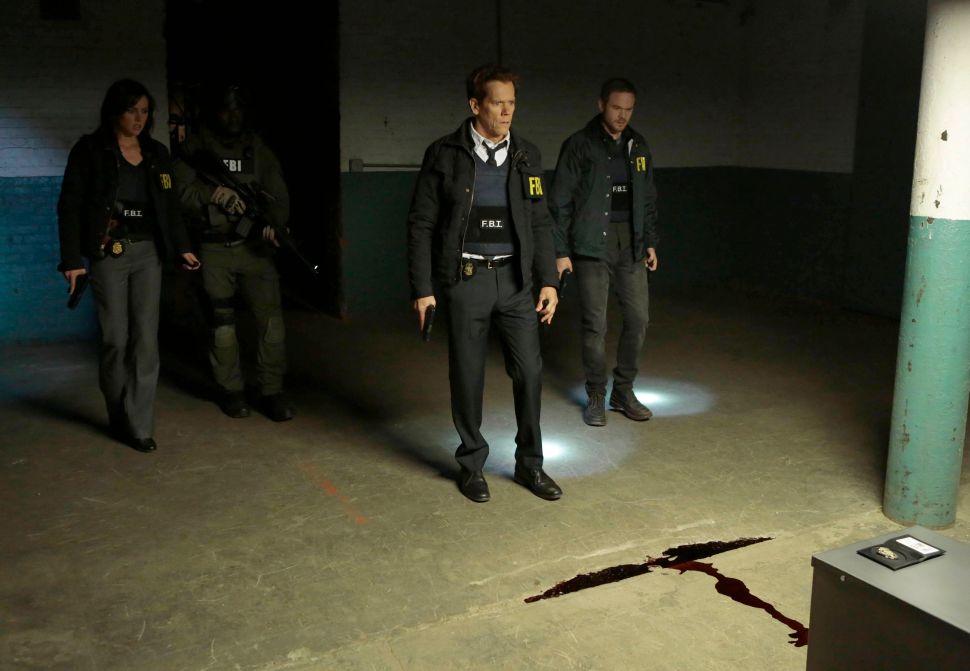