If the Canadian Opera Company’s production of Handel’s Semele that played last week at the Brooklyn Academy of Music was hardly outstanding in any aspect of operatic presentation, it did at least provide a handy pretext for examining the relationship between New York audiences and the art they consume.

What happened at the performance I saw Friday night is what happens at many large-scale performing arts events—opera, theater or dance—especially at BAM, but elsewhere as well. Once triggered by an isolated comic moment early in the presentation, the audience seemed to decide the piece was some sort of campy goof, and signaled their being in on the joke by laughing at every subsequent moment that could be considered ironic, incongruous or even unexpected.

This phenomenon has been going on for so long that it even has an unofficial name: A colleague who writes under the name Dawn Fatale has dubbed it the “BAM Effect.” It seems to have first appeared about the time the Next Wave Festival premiered in the early 1980s, spurred by the quirky work of artists like Laurie Anderson and Robert Wilson. Now, it crops up even at so essentially a serious piece as Mark Morris’ The Hard Nut. After a seriocomic opening scene, this ballet treats the mythic content of the fairy tale in a heartfelt, even tragic way. But the BAM Effect compels the audience to titter all night long.

This Semele, which is a hybrid of straightforward opera production and gallery installation by the avant-garde Chinese artist Zhang Huan, was also a victim—or, in this case, I would say a beneficiary—of the BAM Effect. The audience laughed, loudly and frequently, meanwhile dismissing whatever was serious and meaningful in the opera as trivial.

To be fair, Semele is not an easy piece to bring off. It’s not strictly an opera, but rather a “secular oratorio,” a work devised for unstaged concert performance. The tone of the piece is tricky, balancing between irony and tragedy, ending (as originally written) on a note of joyous redemption. And it is devilishly tough to sing, demanding from its cast superb flexibility for brilliant coloratura as well as immaculate legato for sustained lyric arias.

Mr. Zhang’s approach to the work came off as a mishmash of willful oddness and unimaginative conventionality. The program notes reveal that his first interest was in restoring a four-century-old wooden Ming dynasty temple that had fallen into disrepair on the outskirts of Shanghai. In the process, he discovered a diary of a man who was arrested for murdering his wife’s lover. That crime of passion he connected to the myth of Semele, whose death was also caused by a jealous spouse—in this case, Juno, consort to the god Jupiter, who has taken the mortal Semele as his lover.

All of this backstory, though, one had to take on faith, because the staging proper made little or no allusion to it. The opera was presented for the most part in a conservative, noninterventionist way, with competently choreographed blocking for the principals and the chorus.

However, Mr. Zhang also inserted a number of what might be called Asian fusion vaudeville acts. A pantomime-style donkey with an oversized phallus cavorted during the chorus “Hail Cadmus, hail!” During a scene change, a Tibetan folk singer warbled one of those pentatonic tunes that sound so aimless and unfinished to Western ears. Later, a couple of sumo wrestlers grappled during the second act closer “Bless the glad earth,” with no relevance I could grasp to music or text. Most mystifyingly of all, the opera ended not with the birth of Semele’s son, the god Bacchus, but with a grim funeral procession accompanied by a hummed version of the communist anthem “The Internationale.”

As you might expect, the BAM Effect was in full play, to the point that some really lovely singing was overshadowed. Soprano Jane Archibald was about as fine a Semele as one could imagine, breathtakingly fleet in the elaborate roulades of “Myself I shall adore” and silky smooth in the lament “O sleep, why dost thou leave me.” In a clingy pink satin nightgown, she looked every luscious inch a god’s plaything.

Countertenor Lawrence Zazzo revealed a powerful, lithe voice as Semele’s rejected fiancé Athamas, and he performed his silly stage business—even caressing the donkey’s hindquarters—as if he meant it. The rich bass-baritone of Kyle Ketelsen easily encompassed both the grandiose recitatives of King Cadmus and the sleep-god Somnus’ sexually aroused coloratura in “More sweet is that name.”

A good deal less successful was Colin Ainsworth as Jupiter, struggling with a tiny, colorless voice that came into focus only in time for his love song “Where’er you walk.” It was difficult to imagine what Semele saw in this supposedly godlike lover, styled as he was with a puffy shirt and a headful of Taylor Swift’s leftover extensions.

But the biggest letdown was in what is arguably the opera’s most grateful role—or roles, rather: The doubling of Semele’s lovesick sister Ino and the jealous goddess Juno. The towering contralto Hilary Summers looked so imposing that her small, bottled-sounding voice was doubly disappointing. Juno’s gleefully scheming aria “Hence, Iris, hence away,” a showstopper if sung even passably well, went for nothing, the fast coloratura reduced to a series of decorous whoops.

If the conducting of Christopher Moulds sounded a little old-fashioned—all that romantic string vibrato!—he set judicious tempos and achieved a really admirable blend in the choruses. I do wish he’d pushed back against the heavy-handed cuts Mr. Zhang imposed on this radiant score. A special treat from everyone involved, though, was immaculate diction of the lovely Congreve libretto, every word crystalline. So perfect was the projection of the text that the projected titles were superfluous.

On the other hand, when you can understand every word of an opera, you do begin to wonder what the hell those sumo wrestlers have to do with anything. And as soon as that distraction kicks in, so does the BAM Effect. 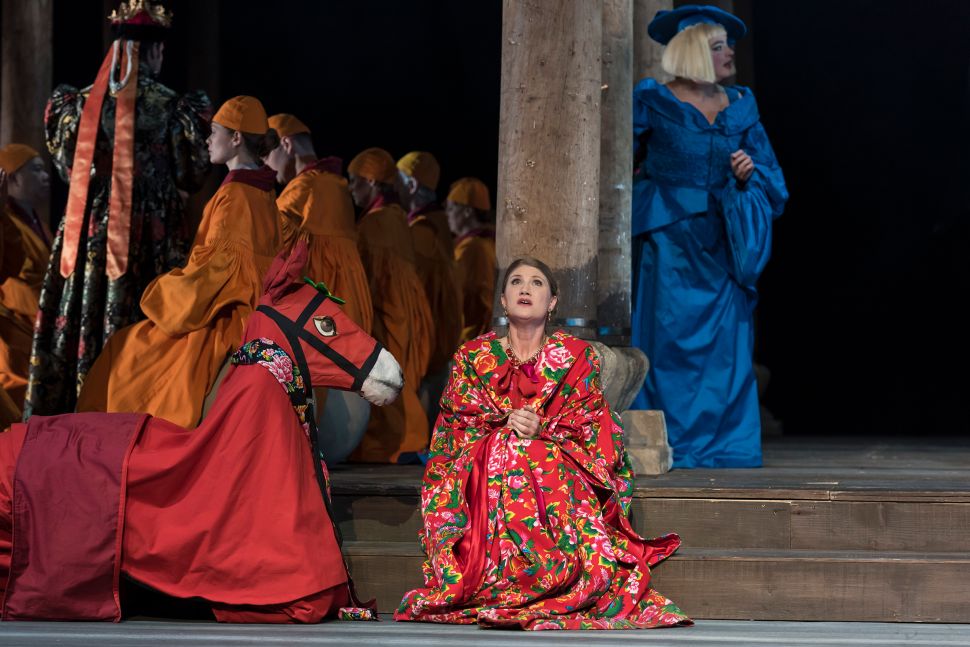