If you’re a fan of Law & Order: SVU, just admit it, sometimes you think, ‘just what do they have left to say after so many years of this?’ And then you watch a new episode and you understand that there’s still plenty left to say.

Some people might contend that this episode was difficult to relate to because it was about someone who’s on parole, a person who knowingly committed crimes and spent time incarcerated, something that the majority of the population has not experienced.  But in reality, it really doesn’t matter what someone has or hasn’t done in their past, what matters is that this person is an individual with rights of protection that are guaranteed under the law, just like everyone else.

When ex-con Tommy meets with his parole officer, Donna Marshall, she immediately asks for a urine test, a common occurrence for parolees, but it’s clear from the start that things are not going to go well for Tommy, it’s just not directly clear just how bad they’re going to go.

Tommy, as it happens, is the finance of Bella, the sister of the newest member of the SVU squad, Detective Carisi and when he doesn’t come home the night after his meeting with his parole officer, Bella calls Carisi for some assistance. Carisi discovers that Tommy was involved in a bar brawl and spent the night locked up for his disorderly conduct.

Carisi thinks that Tommy’s just fallen back into old habits and scolds Bella’s beau, but when Tommy discloses that he went on the bender because his P.O. forced him to have sex with her at gunpoint, Carisi’s SVU skills kick into high gear and he calls upon his fellow officers to help prove that Tommy is being truthful about what happened.

The detectives vet both Tommy and Marshall and throughout the investigation, while there is an on-going discussion about whether a man can actually be raped, Benson never waivers in her belief of the victim’s story.

There were plenty of twists in the case including Marshall’s supervisor tipping her off after which she plants drugs in Tommy’s apartment the discovery of which leads to Tommy’s arrest, Bella flip-flopping as to whether she’ll continue her pregnancy, a witness who originally backs Tommy but then waivers on the stand, and Barba being Barba as he uses his uniquely indefinable courtroom strategizing methods to get what he wants.

In the end, there was no shocking reveal of any kind as everyone knew who the perpetrator was and who the victims was, it was just a matter of getting the justice that the victim deserved. But, in this case, the outcome really didn’t seem harsh enough to fit the woman’s actual crimes. Seriously, she raped at least two people and all she got was probation? That hardly seems to the appropriate punishment. At least she’ll be subjected to the same type of scrutiny that her charges faced as Marshall, once the parole officer, is now the parolee and will be under the watchful eye of her very own P.O. for years to come. That’ll be an interesting dynamic between those two, right? ‘Oh I was a parole officer and now I’m on probation because I raped a few of my parolees.’ Rarely has the phrase ‘what goes around comes around’ seemed more apropos.

While the central theme of the storyline was quite apparent, it was the elements that while not immediately noticeable, lingered just under the surface of this episode, that really moved it to another level. Much of this had to do with using the character traits of all of the parties involved to examine the real emotion that this case evoked in each individual.

Rollins represented the gray area of the situation with her obvious skepticism of Tommy. But, as Amaro pointed out to Carisi — who hasn’t been privilege to Rollins’ family drama — she’s not inclined to trust people, especially blood relatives. Her way of looking out for Carisi was to caution him against getting dragged into something that might end in heartbreak for him. Yes, it’s a bit warped, but viewers, knowing Rollins history, understand her use of these defense mechanics.

Given this knowledge about Rollins and her feelings about Tommy’s situation it was brilliant to have her and the steadfast Benson interrogate Officer Marshall. The two working in tandem were able to coax Marshall’s clearly psychotic tendencies to the into plain view. Amaro or Fin might not have been as successful in that pursuit. It’s rare that Benson and Rollins work this way together and this just showed that they can be masterful in this manner when they want to do so.

Outside the precinct, Liv’s little ploy to get Bella to keep her baby was sweet and obviously effective. She could have met with Bella in the squad room, but by bringing her into what has clearly become Noah’s abode Liv oh so delicately used a combination of baby clothes and Noah’s charm to convince Bella that motherhood is all that and more. Liv’s effect on Bella is clear as she welcomes Tommy home with a hug, indicating that their family will remain intact.

But, for a moment here, let’s think back to Tommy’s testimony. On the stand he says, “I didn’t want it. I was completely powerless. I felt angry, terrified. I was worried about my fiancé. I worried that if I didn’t go along with it Officer Marshall could send me back to jail or shoot me right there.” When asked, “Did you fight back? Did you scream?” The answer was no. “You had one free hand, why didn’t you grab the gun?” “Because if I’d fought, grabbed the gun, done anything, who knows what would have happened.”

Think about him saying these things. Now close your eyes and think about this…imagine right now that these words were spoken by a woman who had been raped by her parole officer, or anyone else for that matter.  It’s not too difficult to do. The responses given here, this whole conversation, are exactly the same as ones we’ve heard by women over and over again in this same situation. Yes, the defense attorney pointed out that Tommy was a big man and there was talk about a man’s ability to perform under such pressure, but at its most basic level, once again, through SVU, we see that rape is rape, no matter the gender of the two parties. When one individual exerts complete control over another with such an act of violence there is no denying that a crime has occurred and that the offender must be made to pay for that crime, with no if it is a man or woman.

Clearly, there is still so much for the team at SVU to share and viewers still have much to absorb. Thank God there’s no end to the show in sight.

Please bear in mind that, like many stories told via SVU, this one portrays the actions of one corrupt parole officer.  There are thousands of parole officers out there who are sincerely working to help rehabilitate their clients (and yes, they refer to them as clients). A few years ago, I was lucky enough to interview a very dedicated P.O. working in the Indiana justice system. An 11-year veteran, Denise Jackson said that her main goal was, simply, “At the end of the day, I want my clients to be self-sufficient and able to weather any storm.” 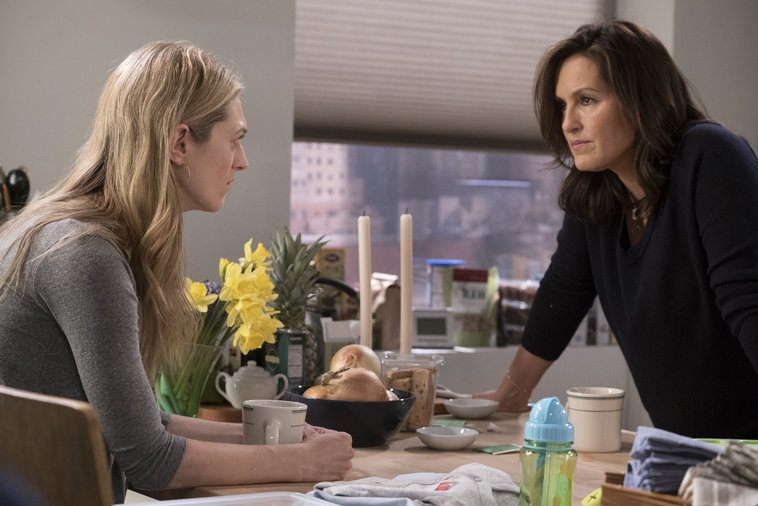