TRENTON — The Senate Environment and Energy Committee passed a senate resolution today condemning Gov. Chris Chrisite’s decision to settle with Exxon Mobil on a series of environmental damage lawsuits for pennies on the dollar.

SCR158, which “strongly urges” rejection of the proposed $225 million settlement in lawsuits brought by the state against Exxon for natural resource damages at Bayway, Bayonne and other New Jersey oil refineries and sites, is sponsored by Senate President Steve Sweeney (D-3) and state Senator Ray Lesniak (D-21). Lesniak introduced the bill during the committee’s hearing this morning, calling the final $225 million settlement figure, which is billions of dollars short of the sought after $8.9 billion, “grossly inadequate.”

The setttlement — over a handful of lawsuits originally filed in 2004 by the DEP over contamination and loss of use of more than 1,500 acres of wetlands, marshes, meadows and waters in North Jersey — has had lawmakers and state conservationists fuming over the last several days. Critics say the governor’s administration is letting the company off the hooks for billions that could otherwise be put toward restoration of contaminated sites in the state, and environmental activists who oppose the decision, like the New Jersey Sierra Club’s Jeff Tittel, are calling it one of the “biggest corporate tax subsidy in state history.”

Conversely, acting Attorney General John Hoffman touted the figure as the “single largest environmental settlement in state history.” Likewise, Christie spokesman Kevin Roberts scoffed at the notion that the settlement is less than fair, calling it “both absurd and baseless when you consider this is the largest settlement payment from a corporate defendant ever in New Jersey history.”

“Set aside the partisan and political rhetoric and by any objective measure, this fair and historic settlement continues Governor Christie’s record of achieving some of the largest environmental damage settlement victories when compared to past administrations of both parties,” Roberts said.

The measure passed at the hearing without much opposition, with four members of the committee voting in favor and one abstaining. Bill Kibler, Director of Policy & Science at the Raritan Headwaters Association, said lawmakers should be “ashamed” that Exxon won’t have to answer for the damage its caused communities across the state, and likened the situation to the Exxon Valdez oil spill in 1984, when an oil tanker bound for Long Beach, California, struck a reef of the Alaskan Coast spilling an estimate 11 million barrels of crude oil into the ocean.

In that case, he said, the state of Alaska largely held the company accountable for damages.

“The foremost responsibility of government is to protect its state’s citizens. Alaska did that, governor Christie is not,” he said.

While the bill is largely symbolic — political observers note that the state can’t outright prevent Christie from settling for the reported amount  — lawmakers say it does send a clear indication both to the front office and New Jersey superior court judge Michael Hogan that the legislature does not approve. Committee Chairman and state Senator Bob Smith (D-19) said lawmakers will send Hogan a letter together with the resolution urging him to reject the deal, should SC158 pass the full Senate later this month. 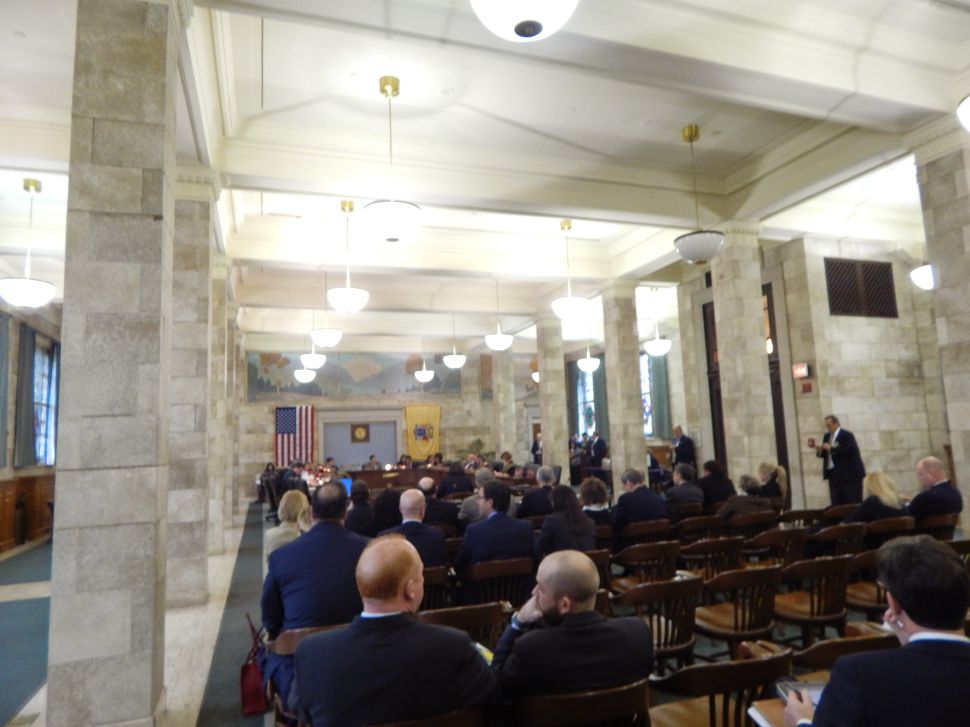