JERSEY CITY – A five-minute walk with state Assemblyman Charles Mainor (D-31) on Friday in his Jersey City neighborhood turned into an hour, easily, as many residents asked him the same question.

“You going to run, or what?” yelled a woman from her car window in front of P.S. 29 on Claremont Avenue, echoing what many of Mainor’s supporters have been asking him since a PolitickerNJ story on Thursday reported that state Assembly Speaker and Hudson County Democratic Organization Chair Vinny Prieto (D-32) had indicated Mainor was done. “You’ve got to do it, Mainor! Come on now!”

Following a flurry of phone calls on Thursday night and into Friday morning, Mainor told PolitickerNJ that he is now at a crossroads, trying to decide whether to go with his head, which knows an off-the-line challenge is hard, or go with his heart and listen to what the voice of the streets is telling him.

“I really don’t know what I’m going to do,” said Mainor, 48, who has served in the Assembly since 2010. “I had a conversation with [Prieto] yesterday, and during that conversation, I was on the verge of stepping out, walking away and allowing the organization to put in a replacement. I was doing that to make sure that the organization will stay strong, and as long as the community didn’t have any issues.

“But after the article came out, I received a total of maybe 15 phone calls from community activists, the pastors of large churches and everyday people, telling me they don’t want me to leave,” Mainor added. “They said if I was not to run, then I would be abandoning them.”

A casual observation of the political scene in the 31st Legislative District, which includes all of Bayonne and parts of Jersey City, lately would lead one to abandon all hope of order.

The mayors of the two Hudson County cities traditionally choose one state Assembly candidate each. Bayonne Mayor Jimmy Davis coalesced relatively early behind the candidacy of Nicholas Chairavalloti instead of incumbent Jason O’Donnell, who was a strong ally of Davis’ opponent in last year’s mayoral election, former Bayonne Mayor Mark Smith. O’Donnell, a potential 2018 Bayonne mayoral candidate, told PolitickerNJ earlier this week that he would not seek reelection.

Jersey City Mayor Steve Fulop has had a more difficult time finding another candidate to replace Mainor on the line, the most recent candidate named being Angela McKnight. Fulop has had these difficulties even thought he is working together with his sometime rival in Hudson County politics, state Senator Sandra Cunningham (D-31), to unify behind a Jersey City-based Assembly candidate.

“We have a lot of great people in and out of office that get things done. But we’re scattered. For some strange reason, we don’t do things together,” Mainor said. “Once the election is over, other groups tend to come back together. We don’t, and I don’t know why. But until we realize that we’re all in this together, we’re going to always have this problem.”

Mainor noted that he still considered himself an ally of Cunningham, and that he has a “political, if not personal” relationship with Fulop. But regardless of whether or not he runs off the line, Mainor doesn’t see himself as part of any proxy struggle between combating elements of the HCDO.

“If there is a war [within the HCDO], that has nothing to with me. Because if it did, I wouldn’t be sitting here talking to you because I’d be taking orders from someone else,” said Mainor, who said he might consider a run for mayor or state Senator in the long run if he survives in the short term. “If I run, I won’t have the support of Steve Fulop, Sandra Cunnigham, or the organization. I’m concerned about burning bridges. I might win this election, then be in power and be powerless.”

The clock is ticking for Mainor if he wants to take on the Hudson County powers-that-be. He needs to have 100 signed ballot petitions into Trenton by the end of business day on Monday.

After 25 years as a police officer, Mainor feels that he knows his streets, and that he can relate to his people.

“I can relate. Some of the people that I see now in desperate need, I’ve seen at their highest. I’ve seen this community at its worst, but I’ve seen the upswing, too,” Mainor said, pointing to work he put in on bills involving education, child support and law enforcement issues as examples of how he has tried to help his community. “People here know my door is open. They know that they can call me. And if I’m dealing with these issues already, I’m a little confused as to why I can’t continue.”

Yet on Friday afternoon, Mainor kept getting called out in the street, the same streets where Glenn Cunningham used to walk.

As he went into this weekend, Mainor thought about what Cunnigham would have wanted him to do.

“I thought the door was shut, but for some reason, when I walk around, I feel like the door is open again,” Mainor said. “Things happen for a reason. First thing tomorrow morning, if I’m going to run, I’ll be out getting signatures. If I think my running for reelection is going to hurt to hurt the community, I’ll walk away. But I also don’t think that anyone can beat me.

“i think Glenn Cunningham would tell me to run. Everyone told him he couldn’t win, until he did,” Mainor said, stopping to greet a few more people in the early spring streets of his neighborhood. “Glenn never ran away from a fight.” 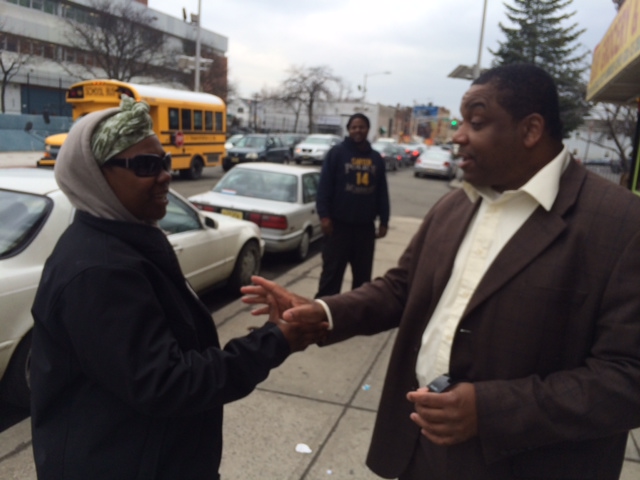