I have long harbored the not-so-revolutionary belief that a medium coffee is the best and most sensible coffee one can order. Like a mid-size sedan, it’s a civilized, fuel-efficient option. But in recent years, I’ve found, my preference has become imperiled, either because many coffee shops no longer sell a medium cup or because every coffee shop that does seems to have its own unique definition of what a medium is.

This has been a mystery to me for about the past eight months now, when it first came to my attention in a moment of coffee-induced confusion, so I recently decided to look into it. It turns out that, over the past decade or so in the New York coffee industry, a quiet but forceful revolution has been percolating—and I as a customer had been caught in its crossfire.

“What’s the reason behind having a medium?” asked James Freeman, the mystical founder of Blue Bottle Coffee, when I described my dilemma. Mr. Freeman’s company only serves one size for drip coffee and lattes to go—a 12 oz. paper cup. “I’ve rejected the notion of different sizes for my whole career in coffee,” he told me. “It creates this false sense of customization.”

Mr. Freeman wants you to rethink your relationship with taste and quantity. You wouldn’t walk into a bar and ask for an extra large Negroni, so why should you expect anything different from the coffee shops you frequent? Indie coffee shops are operating in direct opposition to chains like Starbucks and Dunkin’ Donuts, whose conception of size has, in many ways, corrupted our perception of what a standard cup of coffee might look like, and, in the case of Starbucks, how it might be described.

“Sizes in general in premium shops are going down, and sizes in general in America are going up,” said Oliver Strand, who is writing a book on coffee. “That makes for a really confusing landscape for the consumer.” Indeed, the schism between specialty coffee shops and corporate cafes has created a kind of caffeinated Tower of Babel, which has sowed no small amount of tension between server and customer.

For that we can blame Ken Nye, New York’s original coffee control freak and the founder of Ninth Street Espresso, the first specialty cafe in the city. When Ninth Street opened in 2001, Mr. Nye sought to simplify the anarchic quality of the typical coffee shop menu, which, in the early aughts, was larded with chai beverages (remember those?), shots, extra foam, decaf blends—quelle horreur!—and, of course, a slew of cups. He chose one size for drip coffee, and lattes, which he likes to refer to simply as espresso with milk—no arguments about flat whites in his store, please—were much smaller than the drinks customers were used to. Also, if you wanted an espresso, you’d have to drink it in the shop, out of a porcelain demitasse (he has since abandoned that rule).

Not all coffee shops—and there are about 2,000 in New York, according to the city’s Economic Development Corporation—are as stubbornly idealistic as Ninth Street. Sometimes compromise is called for, as was the case at Cafe Grumpy, which originally opened in Greenpoint in 2005, selling one cup size—12 oz.—for drip. A year later, they were selling two sizes, small and large, thanks to a local firefighter who would pop in every morning and order two cups. Eventually, he complained about the inconvenience and they buckled. “I was trying to keep things simple, but that convinced me,” said Caroline Bell, the cafe’s owner. “And he had a really cute dog.”

Joe Coffee, which has several locations throughout the city, maintains a relatively big menu, but advertises its coffee in ounces and offers three options for drip. Still, most customers ignore that, asking for small, medium and large, said Jonathan Rubinstein, the owner. “The more you start to research this the more irrational and complicated it gets,” he warned me. “There are no rules across the board.”

Mr. Rubinstein has, through the years, slowly backed away from the customer-is-wrong mentality so common at indie cafes—which is not to say counteraction is unnecessary. In the New York food and drink industry, the culture of customization can often feel oppressive. It seems like every other restaurant within a five-block radius of the Observer offices, near Times Square, has its own Chipotle-like menu, and tapas bars, with their myriad options, have run rampant (and the portions!).

So, after weeks of dwelling on the subject of size, and, like a jittery Goldilocks, wandering around the city consuming way too much caffeine in search of the perfect cup, I’ve come to the conclusion that the indie cafes are onto something.

It’s all about the ratio. Do you really need a 20 oz. container—otherwise known as a venti at Starbucks—for your latte, when the espresso that goes into it is the same amount no matter what size you get? You’re just ordering a lot more steamed milk, which is kind of gross when you think about it. It’s as though we’ve collectively infantilized ourselves, walking around like babies with big cups of warm skim.

A 12 oz. cup is, as Mr. Nye put it, “the perfect compromise size”—and what is a medium if not a compromise?—a tall at Starbucks and just enough to get through before your coffee turns lukewarm, a constant fear of mine. It takes a little getting used to if you favor larger drinks, but give it some time if you are feeling resistant. One only needs so much caffeine.

And as much as I dislike the idea of an establishment telling me what I should and should not like—and charging exorbitantly for smaller drinks in the process—it is a refreshing experience walking into a shop and asking for a coffee, no adjectives involved. Small, medium, large; 12 oz., 16 oz., 20 oz.; tall, grande, venti—all irrelevant.

It’s hard to believe that day will ever come for all coffee shops. But in my conversation with Mr. Nye, he reminded me that there was once a time, in some prelapsarian New York we’ll probably never know again—before Starbucks and Dunkin’ Donuts and specialty this and artisanal that—when one cup reigned. It was the age of Anthora, that blue-and-white paper vessel once so common in Greek diners, and if you wanted a coffee, you’d order a regular, which meant it would contain milk and sugar.

The coffee these days is good enough, depending on where you go, that you no longer need to muddle its flavor with white liquids and sweet crystals. But it’s worth remembering the phrase emblazoned on every Anthora cup, which reads, in gold, ancient font: “We are happy to serve you.”

That’s a mantra, I’m quite sure, every coffee shop can agree with. 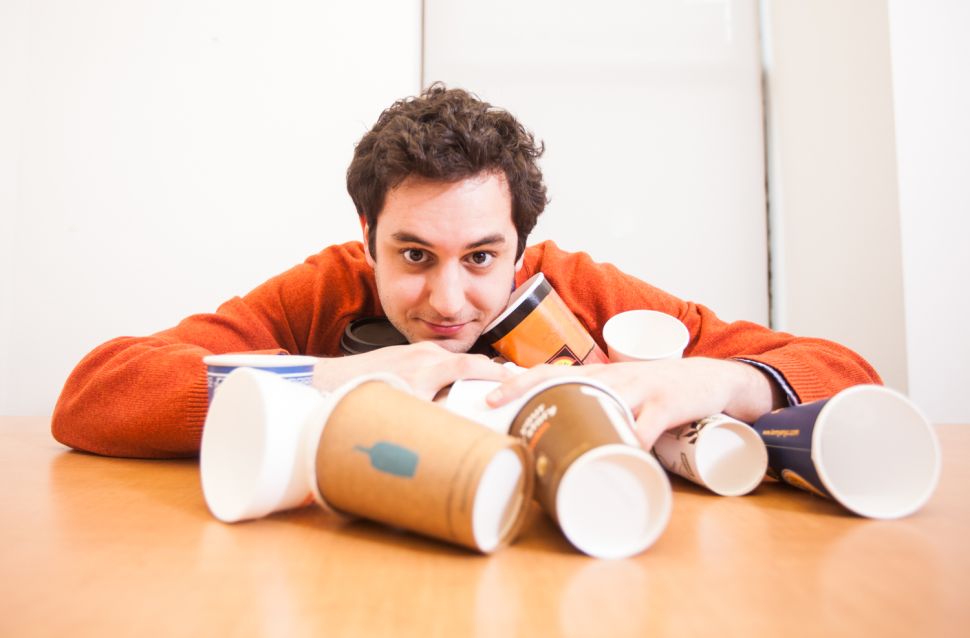