FRANKLIN LAKES – On a day that mixed spiritual and political themes, Josh Gottheimer, a congregant of Barnert Temple in Franklin Lakes, stood before his Jewish worship community on Sunday and introduced a politician they see as a friend: U.S. Senator Bob Menendez (D-N.J.).

“Senator, let me be very clear, from all of us – no matter what, no matter when, no matter how, we will always have your back, because you’ve always had ours,” said Gottheimer, of Wyckoff, to applause from the more than 100 people in attendance, as he addressed Menendez more than three weeks after a report emerged that the Justice Department is preparing to bring criminal charges against New Jersey’s senior senator. “He stood by us for all of these years. In his two decades representing us in Washington, he’s been one of our community’s most vocal and staunch supporters.”

Menendez has repeatedly asserted his innocence against reported allegations that claim that he used his office to boost the business interests of a wealthy Democratic donor and friend in exchange for gifts.

On Sunday, joking at times about how he and the administration of President Obama “don’t see eye to eye” about Iran policy, Menendez was deadly serious about promoting proposed legislation co-sponsored by U.S. Senator Mark Kirk (R-Illinois) that would impose new sanctions on Iran if international negotiators fail to reach a deal soon regarding Tehran’s nuclear program.

“When it comes to the Middle East, it is in the national security interest of the United States to have a strong, unwavering relationship with the state of Israel, the one true democracy in a sea of autocracy,” Menendez said. “It is the one country most likely to be voting with us in common cause in the international forum.”

Several members of the smaller forum present at the Bergen County synagogue on Sunday voiced their support for Menendez in the days ahead.

“In terms of supporting Israel and combating Iran’s quest for nuclear weaponry, there has been no better friend than Senator Menendez,” said John Rosen, the New Jersey regional director of the American Jewish Committee, a worldwide Jewish advocacy organization. “We absolutely intend to support him in this effort to continue his fight to shine a light on negotiations with Iran.”

“I know than in the past, federal prosecutors have indicted senators, and they have not been found guilty,” said Alain Sanders, 63, River Edge, pointing to the 2009 dismissal of the federal indictment of corruption charges against the late U.S. Sen. Ted Stevens (R-Alaska). “Until he’s found guilty, he is a Senator of the United States, and he has been a strong supporter of Israel. I think he will have the strong support of the Jewish community.”

“There is no better member of the United States Senate when it comes to standing behind Israel than Senator Menendez,” Gottheimer, a business executive and former adviser to both Bill and Hillary Clinton who is reportedly considering a run as a Democrat for the Fifth Congressional District congressional seat against U.S. Rep. Scott Garrett (R-5) in 2016, told PolitickerNJ. “People recognize what he’s done for the [Jewish] community over the years. Whatever happens, it’s moments like this when you see who your friends are. You’re going to see a lot of American Jews standing behind him.” 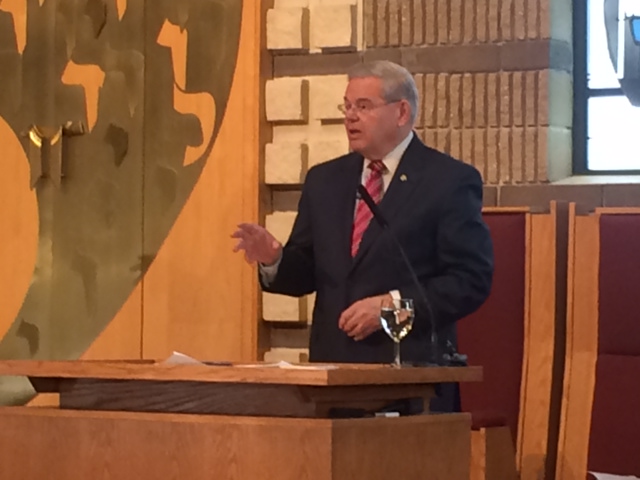