Immigrant advocacy group Make the Road NY and neighborhood organizers New York Communities for Change joined other left-leaning groups outside the lower Manhattan headquarters of the New York Fed, a branch of the national system that controls the interest rates at which lending institutions may borrow money from the United States government. The Fed has left the rates near zero since the financial crisis of 2008 in order to encourage investment, but it has indicated it might raise them this summer amid an improving economy.

The protesters, however, argued that black and Hispanic communities in New York City are still languishing in an economic doldrums, with jobless rates sitting at 11.2 percent and 5.7 percent respectively.

“These unemployment rates are not going to be better by this summer. We’re not a couple months away from a recovery,” said Shawn Sebastian from the Center for Popular Democracy, arguing that the Fed is looking only at a general joblessness picture that averages in the relatively low unemployment rates among whites. “They’re trying to look at the aggregate levels of unemployment and ignore how it’s disproportionately affecting minority communities to push this narrative about a recovery that we’re not experiencing.”

Chanting “don’t raise the rate,” the demonstrators insisted that New York Fed President William Dudley meet with their organizations to discuss the special needs of minorities.

“We need to sit down with him and have an honest conversation about why he needs to keep interest rates low in order to fight for our communities of color, so that we can make sure we are supplying jobs to all,” said Victoria Ruiz of Make the Road.

The protesters also lashed out at the Fed, which has the additional duty of regulating large banks, for failing to prevent lenders from issuing, packaging and selling dubious mortgage loans—which disproportionately went to black and Hispanic homeowners, with areas like Southeast Queens now leading the country in foreclosures.

“The banks, while the Fed was not watching what they were doing, was not doing its job supervising them, they went around snapping up subprime lenders and fueling all of that toxic subprime lending that happened,” said Alexis Iwanisziw of the New Economy Project, noting many major financiers have since paid out massive settlements to the Department of Justice for their activities.

The Federal Reserve Bank of New York referred the Observer to chairwoman Janet Yellen’s remarks after the Fed’s meeting last December, when she said “it can be patient in beginning to normalize the stance of monetary policy.” 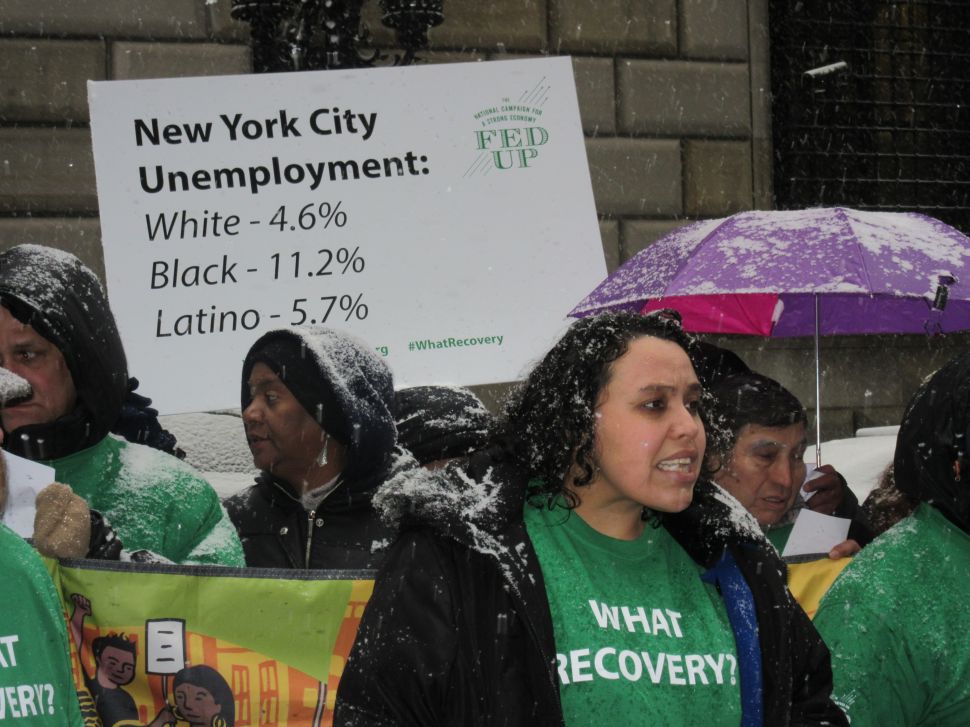