If you can survive being kidnapped by a cult preacher and forced to live in a bunker with three other women for 15 years while being repeatedly told the world has ended, it follows that one might decide a move to New York City is on the table.

So begins the very funny, dark and strange comedy that is Tina Fey and Robert Carlock’s latest screwball ode to the Big Apple, The Unbreakable Kimmy Schmidt, streaming today on Netflix. Starring Ellie Kemper in her strongest role to date,  Kimmy Schmidt gets rolling once the “Mole Women of Indiana” are rescued and go on The Today Show to meet the ever-smug Matt Lauer (“I’m always amazed at what women will do because they’re afraid of being rude,” he opines upon hearing how one woman ended up in such a predicament). Not content to go back to Indiana, Kimmy makes a break for it, and we’re off.

The wind gently rustles Kimmy’s hair as we’re treated to a NYC montage complete with slow spins and near Buddy-the-Elf-level glee. As Kimmy, Kemper is perfect. She nails Kimmy’s wide-eyed optimism and confidence, though it never comes across as too trite or naive. Kimmy may only have an eight grade education, but she’s been through some stuff. There are moments of darkness (she refers early to “weird sex stuff” in the bunker) but it feels appropriate coming from someone who was held captive for 15 years. And with that, let’s all have a moment of appreciation for how hard a sell this show premise is. It’s seriously dark stuff for a comedy, and the show gets all the laughs it can from such a situation while still nodding to the emotional trauma Kimmy experienced, and focusing on her willingness and courage to move forward. I’m here to platonically ship Tina Fey and Robert Carlock, who previously worked together on SNL and 30 Rock, always and forever.

A roommate is produced in the form of Titus (the fantastic Tituss Burgess), a failed broadway star who has been reduced to handing out flyers for an arcade in an off-brand Iron Man costume. He can certainly use a dose of Kimmy’s I-survived-one-of-the-worst-things-that-can-happen-to-a-person optimism, gently telling her that “escaping it is not the same as making it, Kimmy”  but for her, it is.  He also reads the hell out of the media in a gloriously shaming moment, telling Kimmy that people love news tragedies for three reasons: It’s like a titillating horror movie, people feel better for caring about a stranger, and it makes us feel safe that it didn’t happen to us. Pretty much.

A comedic assist is found in their wacky landlady Lillian, played by Carol Kane. After six episodes she isn’t fully fleshed out, but I love the details that emerge about her life, such as when she complains to Titus that her husband was shot in the face only to find out she was the one who shot him. “It was dark out and a black guy was trying to get in bed with me, it was the 70’s!” she defensively shoots back.

Kimmy finds herself employed as a personal assistant/nanny to Jacqueline Voorhes, an uptown one percenter played by Jane Krakowski, because why fix what isn’t broken? Jacqueline and Jenna Maroney are certainly cut from the same expensive cloth (I assume both would only feed their animals spa ), but Jacqueline is ultimately a more empathetic and likeable character than Jenna Maroney, with forever respect to the host of Kidz Got Singing. A former flight attendant with an absentee hedge fund husband, Jacqueline has a young son named Bucklee and a 15-year-old bratty stepdaughter, Xanthippe Lannister Vorhees.  The show does of great job of illuminating the wealth disparity, with Jacqueline offering Kimmy an unopened Fiji and then casually tossing it into the trash when she refuses. Jacqueline also comes with a fantastic backstory which I won’t spoil, but it is truly a work of genius and you will laugh.

The meta, feminist comedy on The Unbreakable Kimmy Schmidt certainly feels very 30 Rock, and the pacing is similar, but there’s no Jack Donaughey character to be found here. The show really rests on the shoulders of Ellie Kemper, and she shines. Kimmy is relentless, facing the world with a positive attitude that borders on naivete, but never too strongly, and absolutely refusing to be a victim. The show also does a great job of reminding you of Kimmy’s backstory in small, horrific ways, like when Jacqueline’s plastic surgeon remarks on Kimmy’s very pronounced scream lines, and she wakes up choking Titus in his sleep during a nightmare. “This isn’t the Chinatown bus! You can’t just choke someone who’s sleeping!” Titus shoots back, a scene which I hope to see in my lifetime.

In many ways the show reminds me of a Carson McCullers-esque band of misfits and outcasts, all trying to make it in a city that can be very lonely. We’ve got characters who are routinely marginalized (gay, black Titus and the female, elderly Lillian) but they refuse to be compartmentalized, often with the help of kidnap survivor Kimmy. You really feel it when Kimmy declares to Titus “we’re different, we’re the strong ones, and we’re going to make it!”

It’s really an incredibly unique show, and I’m actually glad NBC passed. They don’t deserve The Unbreakable Kimmy Schmidt, but we do. It’s the kind of wacky show that most likely wouldn’t have gotten the time slot and publicity it deserved (look how Parks and Rec was treated its last season), and Netflix has already committed to two season. Keep on keeping on, Netflix. I stream you. 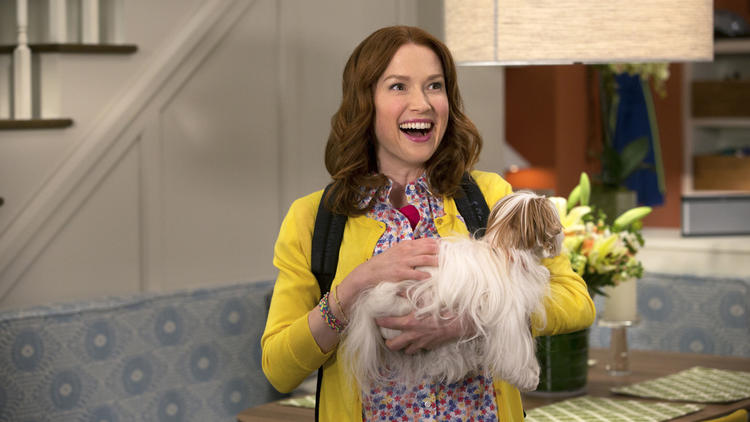