A study found that the average social network-using American aged 18-64 spends a total of 3.2 hours each day on various online platforms. This may be surprising, but it’s really not after considering how many online accounts we actually have. To get an idea of how many sites you use, consider that the average user of LastPass—an online password manager—reportedly has 100 accounts.

A new web and mobile platform plans to simplify our online lives by providing users access to all of their accounts in one place. Squidlle will integrate dozens of social networks and sites for music, video, images, design and blogging and create one combined feed for all of them. The product—whose odd name we assume was created with an algorithmic name generator—just launched on Indiegogo.

While there are a number of services that display various accounts at once (such as TweetDeck and Feedient), they’re lacking a combined feed and only cater to the big, big guys like Facebook, Twitter, Instagram and Tumblr. There are others that integrate messages from various accounts into one inbox, but they’re leaving out the updates.

Squidlle is doing all of it. Users will be able to browse updates from various accounts on one combined feed, post and message across all of their accounts at once and even use multiple accounts from the same service (like personal and professional Twitter handles). They’ll also be able to hide specific content, save posts or links as “read later,” create lists, save drafts and customize notifications.

Squidlle is for sites other than the those specifically for social networking as well. For example, users will be able to easily access their music on Spotify, SoundCloud, Last.fm, MixCloud, RDio and 8Tracks at once. The same applies for the various platforms for sharing photos, blogging, video chatting and streaming videos. According to the Indiegogo page, the Squidlle team has plans to integrate 37 platforms from Vine to WordPress, Viber and even Myspace.

Although Squidlle is far from reaching its $10,000 crowdfunding goal (granted, the campaign just started), it looks like we’ll see a 2015 debut no matter what. The product’s timeline indicates that the platform engine has already been created, and little of the Indiegogo funds will be for development while 66 percent will be allocated for marketing. Alpha testing is scheduled to begin in June and the web release is set for October, but it looks like the mobile versions may take a bit longer.

We already have 100 accounts each, so what’s one more? 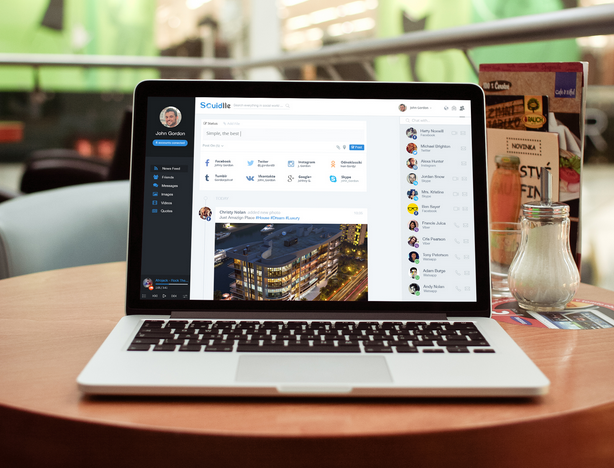