A study found that mothers of kids with autism have stress levels comparable to those of combat soldiers.

The mental strain stems from both the constant feeling that “anything can happen” and the frustrations associated with the seemingly simple day-to-day activities that most of us take for granted. One such activity that the majority of people can’t even fathom to be so difficult is getting dressed. And we’re not talking about choosing the perfect outfit; we mean physically putting on clothes—a task that takes 30 minutes or more for many with low-functioning Autism Spectrum Disorder (ASD) and is a daily struggle for 21 million Americans with various disabilities.

Former CNN anchor Lauren Thierry knows this to be true. Her 17-year-old son Liam has low functioning ASD, and when her search for a solution to the many clothing problems associated with his disorder came up empty, she created her own. After ditching the limelight to care for her son and film a documentary called Autism Every Day, she founded Independence Day Clothing, a line of GPS-enabled clothes that eases parents’ safety worries while making it simpler than ever for those with disabilities to dress themselves.

“Because I’ve had someone with autism in my family for so long, I’ve been able to see what works and what doesn’t work,” Ms. Thierry told The Observer. “I’ve had a focus group in my own home this whole time.”

The clothes—first created last year with the help of Harlem designer Delia Anderson, who has a son with Multiple sclerosis—cut dressing time by nearly 90 percent because they don’t have specific fronts, backs, insides or outsides. The orientation of clothing is where it gets tricky for most who struggle with this, but each article of the clothing is a suitable shirt or pair of pants no matter which way it’s put on.

Without frustration, Liam can now dress himself in only three minutes, and for the first time in 17 years, Ms. Thierry has her mornings back. The relief in her voice was evident as she described the joy of now being able to have a sit-down breakfast and morning banter with all three of her children (she also has typical twin 13-year-olds).

But most importantly, Liam is capable and confident to do something that held him back for years. Mrs. Thierry explained that occupational therapists—who help those with physical and cognitive disabilities improve life skills—spend 75 percent of their time with patients helping them learn to get dressed. Now, they can spend that time teaching them more fulfilling skills like how to write their names or use cameras.

The unique line of clothing also addresses a number of other issues that hinder those with autism. Firstly, they are completely free of seams, buttons, zippers, collars and tags. Many people with ASD have sensory issues, which causes things like seams and tags to upset them and “drive them crazy,” Mrs. Thierry said. Additionally, every order comes with a GPS tracker that can be easily hidden in the discreet pockets inside all of the clothes. Because those with ASD tend to wander and can find themselves in danger as a result, many autism parents place GPS trackers on their children. But traditional tracking methods, she explained, are big and bulky and bother sensory issues.

“They can’t wear watches; they can’t wear ankle braces. They feel enslaved, chained. I’ve seen a girl chew through a Hello Kitty watch in 15 minutes to get it off. My heart went out to her. And you want her to wear an ankle bracelet?” she said. “They suggest pendents and necklaces, but you really have to know an autistic kid. He’s going to bite it, tear it off and chew it. And it’s electronics in there. It’s not a good idea.”

The discreet GPS feature has even garnered interest from those who work with dementia patients, who also tend to wander. The clothes actually have applications across a broad range of cognitive and physical disorders from ASD and dementia to cerebral palsy and spinal injury. As of right now, the clothes are sized for teens and pre-teens and come in an all-American style that resembles what you’d buy at The Gap, but as the interest in Independence Day Clothing grows for older age groups, they’re experimenting with more mature looks and fabrics. This fall, they’ll be adding new designs and a collection of underwear as well.

The purpose of the line is to empower the disabled physically, but mentally as well. Ms. Thierry explained that she gravitated toward the normcore style because it’s classic, seasonless and never goes out of style. She actually styled the line off the clothes in her typical kids’ closets.

“We’re not reinventing the wheel. We’re taking what’s out there and adapting it,” she said. 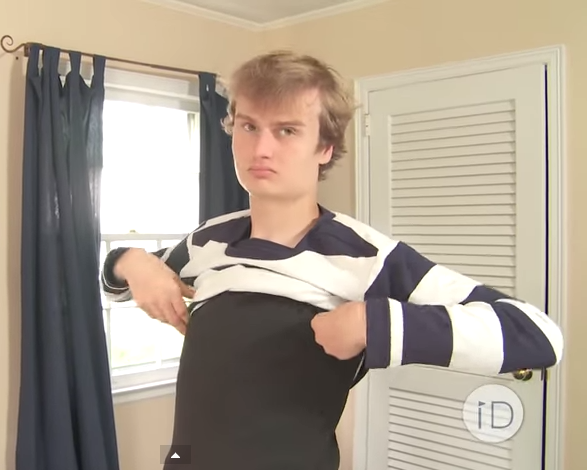