No, she’s not running for president. But the adulation doesn’t hurt.

Senator Elizabeth Warren of Massachusetts, the firebrand liberal, told her starry-eyed supporters once again that she would not run for president in 2016, even as “run, Liz, run!” chants interrupted her homespun lecture at a Manhattan Barnes & Noble last night. Ms. Warren harped on familiar themes—the deregulation of the financial industry, the skyrocketing costs of higher education—while also taking time to denounce a free-trade proposal championed by President Barack Obama.

“No. I am not running for president, I’m not going to run for president. I am working my fanny off every single day on the key issues that I think matter in this country,” Ms. Warren said in response to an audience question. “I’m doing it every day. I have this place now in the Senate, this opportunity to get out there and fight.”

Ms. Warren appeared at the Union Square Barnes & Noble to promote the paperback release of her memoir, “A Fighting Chance.” More than a hundred people, including organizers from the liberal organization MoveOn and a political action committee to draft Ms. Warren for the presidency, Ready for Warren, turned up to hear Ms. Warren speak for about an hour. She took several questions from the audience but none from reporters, who were sequestered in the back of a sprawling room in the store’s top floor.

In her Oklahoma twang, Ms. Warren said her rags-to-riches story reflected the promise of mid-century America, when post-New Deal governments invested heavily in higher education, scientific research and infrastructure. Ms. Warren said strong regulations on the financial industry guarded the nation’s prosperity. Banking in those days, in her own words, “was boring.”

Ms. Warren blamed actions taken under the Republican administration of Ronald Reagan for loosening the reins on big banks and denouncing the repeal of the Glass-Steagall Act, Depression-era legislation that barred commercial banks from underwriting securities. Ms. Warren did not note the repeal of the Glass-Steagall occurred under former President Bill Clinton, a Democrat.

But for the people crammed on folding chairs to hear Ms. Warren speak, the Clinton family was not to be ignored. One man cried out, during one of several moments of applause for the senator, that “somebody’s gotta push Hillary,” a reference to Hillary Clinton’s likely campaign for president. Some progressive activists feel Ms. Clinton, the former secretary of state, and her husband are too beholden to Wall Street, and view Ms. Warren as the purest embodiment of their values.

Every time someone shouted for her to run for president, the senator politely smiled and waved.

Ms. Warren was folksy and self-effacing, if scripted, throughout her talk. She said she was just a “nerd” who loved policy. She did a slight shimmy when reggae music accidentally started blaring over the store’s loudspeakers. (“I bet you guys wanted to check out if I have some other skills.”) A question about whether she was worried that big banks would stop donating to her fellow Democrats to imperil their re-election chances had Ms. Warren threatening to do “my Jon Stewart spit,” a dramatic and incredulous spitting of . She said the proposed Trans-Pacific Partnership, a free-trade agreement with Asian countries backed by the Obama administration, is “dangerous for the whole world.”

Ms. Warren also mocked critics who accused her of a “far left agenda.” “Most of America agrees with us. That’s the thing we have to remember. Far left agenda, really? You been out there and talk to real people?”

She said she wrote her book “out of frustration” with an economic system gone awry, and also out of “gratitude” for her the opportunities she was given. Despite her near-constant lament of Wall Street running amok and the hollowing out of America’s middle class, Ms. Warren insisted she was an optimist.

“I truly do believe we know what’s wrong and we know how to fix it,” Ms. Warren said. “It is not gonna be on our watch that the first generation of Americans does worse than its parents.” 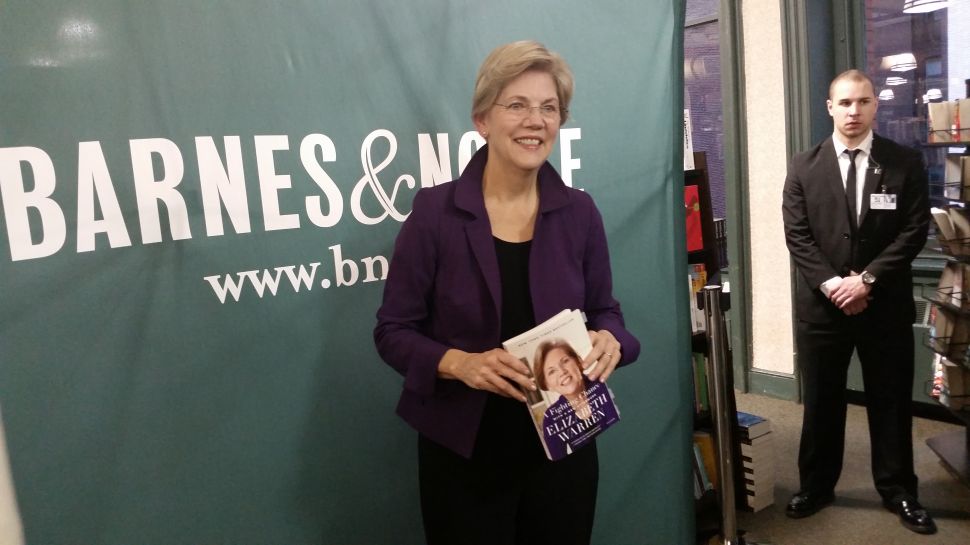