State Comptroller Thomas DiNapoli today warned of consequences for both New York’s image and its internal workings if the budget negotiations between Gov. Andrew Cuomo and the leaders of the state legislature stretch past the April 1 deadline.

Speaking to the Observer after an unrelated event with Bronx Borough President Ruben Diaz Jr., Mr. DiNapoli—who is charged with overseeing the state’s fiduciary affairs—noted that a late budget would break a four-year streak of punctuality. Mr. Cuomo, despite numerous campaign boasts about settling state spending on-time, has declared he will not sign a budget that does not include his ethics reform plan, even if it means a tardy final deal.

“There’s nothing good to come of a late budget,” Mr. DiNapoli said. “It would certainly send the wrong message that, after a number of years of getting the budgets done on time, that we’re falling back on some of the bad habits of the past.”

Mr. Cuomo and Assembly Speaker Carl Heastie have agreed on a plan for increased disclosure of elected officials’ outside incomes. But the Republican leadership in the State Senate argue the Democratic proposal focuses too much on the legislature, and want the plan to force Mr. Cuomo’s longtime girlfriend Sandra Lee to reveal her earnings.

Education spending is another sticking point. Mr. Heastie, an ally of Mayor Bill de Blasio, has pushed back on Mr. Cuomo’s proposal to base public school teacher evaluations primarily on standardized tests and to have the state usurp control of failing schools.

The Assembly budget calls for the state to sink $1.8 billion into education, while Mr. Cuomo has said he will agree to just $377 million, unless the legislature embraces his proposals—then he will agree to $1.1 billion.

On-time budgets have been exception, not the rule, in New York State history. But Mr. DiNapoli said that they make financial planning in municipalities extremely difficult, especially for school districts.

“If we have a late budget, school districts across the state that are now in the communities where they vote on those budgets, they’re putting those budgets together. If they don’t know what they’re getting, it makes it harder for them to do their planning,” he said, noting New York currently has a budget surplus. “It’s a question of priorities. I mean, the state has a lot of money. But the only responsibility of the state is not just education.”

His office would immediately halt the legislators’ state paychecks, as required by law, and would have the duty of reviewing the emergency appropriations bills necessary to keep the state functioning in the interim.

“The other issue is, what would happen if there’s a delay on the emergency appropriation bills you’d need to enact if there is no budget. Could you be jeopardizing state workers getting paid, or people who do business with the state, they’re not getting their checks,” he said.

Mr. DiNapoli reported his office was braced to deal with such a scenario, but said he believed that the governor, Mr. Heastie, State Senate Majority Leader Dean Skelos and State Senate Independent Democratic Conference Leader Jeffrey Klein could reach an arrangement by the month’s end.

“They can certainly be on track to get it done on time,” he said. “I’m going to go with the optimistic point of view, since everybody knows nothing good can come out of a late budget, it’ll get done on time.” 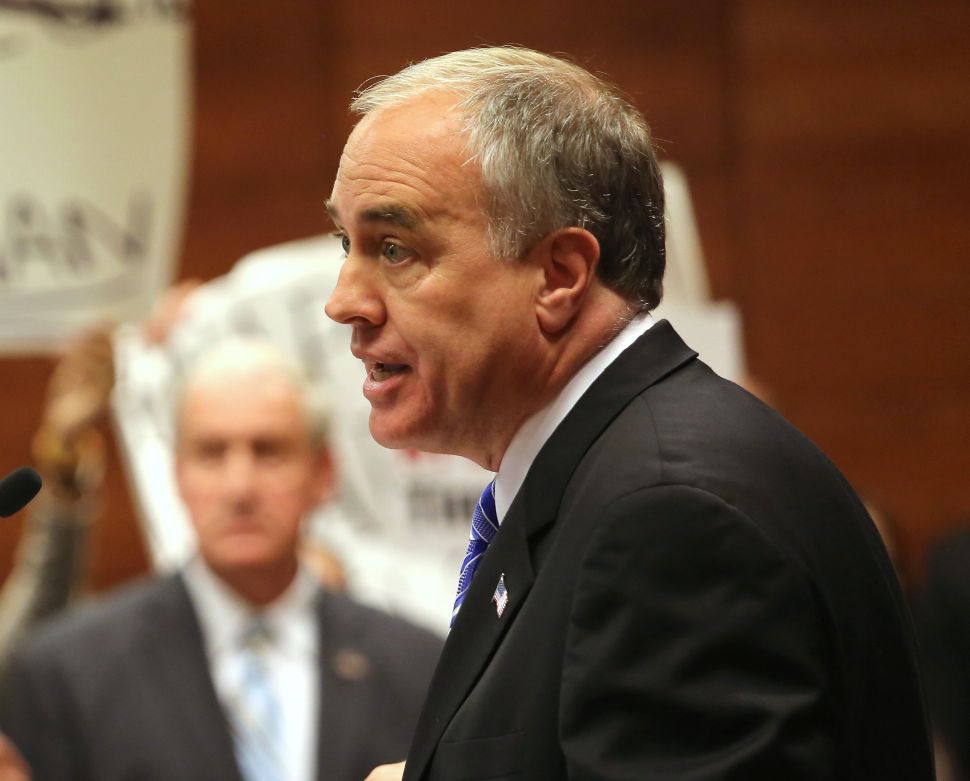