One of New York’s historic homes has taken the unusual step of commissioning a series of Contemporary art works for an upcoming exhibition to celebrate its 250th anniversary. In May, the Morris-Jumel Mansion in Washington Heights will open “Colonial Arrangements,” by London-born, Lagos, Nigeria-raised textile artist Yinka Shonibare.

As part of the exhibition, Shonibare will create an apparition of the storied home’s most famous resident: Eliza Jumel (1775-1865). The widow of Aaron Burr, and at one point one of the richest woman in New York, Jumel was a colorful and polarizing figure with ties to Napoleon’s France. She lived mostly in lower Manhattan but the 160th Street residence, on a breezy hill with views of the Harlem and Hudson Rivers, was her summer home. George Washington also slept there, since the then-General headquartered the colonial army in the mansion in the fall of 1776.

The apparition, created using theatrical techniques of her time, will be installed in Morris-Jumel’s 18th and 19th century rooms along with sculptures of children in costume from a 2009 series by Shonibare. It’s a bit of a “get” for the institution as Shonibare, who often adds MBE to his name to denote Member of the British Empire, was a finalist for that nation’s prestigious Turner Prize in 2004.

He is represented in New York by James Cohan Gallery.

According to the Morris-Jumel, “Shonibare’s art explores identity, race, gender and the cross-pollination of cultures through the use of life-sized mannequins adorned in period costumes” crafted of Dutch wax fabric (a colorful, Indonesian textile introduced to Africa by British and Dutch merchants and colonizers). 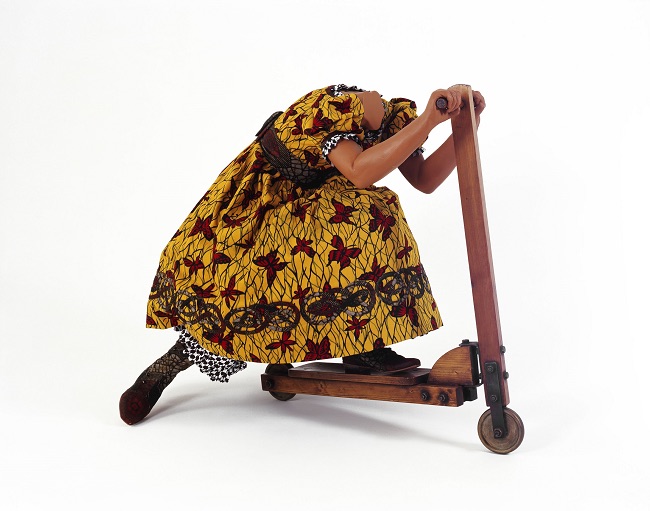