Despite months of increased resources and repeated announcements of new reforms for Rikers Island, the headlines from the city’s jail complex in recent weeks have not been great.

A correction officer was sexually assaulted by an inmate, while other inmates and officers rushed to her aid. Most of the island’s jails were locked down for 34 hours as officers scoured cell blocks for weapons and contraband. In a lawsuit, inmates allege they were poisoned by jail meatloaf. And that’s all in the last two weeks.

But today, during his second visit to Rikers Island since taking office, Mayor Bill de Blasio said he’s confident the department can be turned around—sooner rather than later.

“I do not think because a problem is decades old it takes decades to resolve,” Mr. de Blasio said.

Mr. de Blasio made his remarks standing beside Commissioner Joseph Ponte in a freshly painted cell block called the Enhanced Supervision Housing Unit, that will soon be the home of Rikers Island’s most dangerous inmates. The unit has an increased ratio of officers to inmates, and inmates will be locked in their cells for 14 hours a day, with just 25 allowed outside their cells at a time. The idea is to isolate the inmates who cause most of the mayhem in city jails—just about seven percent, Mr. de Blasio said. Flatscreen televisions hung from the walls of the cell block, which were also adorned with upbeat slogans like: “Positive anything is better than nothing.”

Mr. de Blasio’s last visit to Rikers Island was to tout the ending of punitive segregation for inmates under 18—a move pushed for by mental health advocates. His December press conference at the island’s jail for young inmates, the Robert N. Davoren Complex, focused on ending a culture he’s called “dehumanizing” in city jails, as media reports outlined brutality against inmates and U.S. Attorney Preet Bharara alleged a “culture of violence” against adolescent inmates.

Today, inside the Otis M. Bantum Detention Center, Mr. de Blasio was focused more acutely on safety—including safety of officers like the one who was attacked earlier this month—as he announced a 14-point plan to reduce violence.

“We have to back them up with tough policies that help us reduce violence in a number of ways,” he said of correction officers.

Beside him, Mr. Ponte spoke more strongly than at previous press conferences, reiterating Mr. de Blasio’s promises to make the jails safer and making reference to the “media attention about some situations.”

“I want to make sure that everybody understands: everybody that walks in a door in any of our facility, it is safety first. Our staff safety is our number one priority,” Mr. Ponte said. “None of these reforms that the mayor talked about will work if our staff are not safe.”

From January 1 through March 10, there have been 21 slashings or stabbings—more than double than the 10 there had been this time last year. The number of assaults on staff has risen by 13 percent, to 189 from 163 last year; though the number of those assaults that caused serious injury fell 22 percent, from to 28 from 36.

The number of uses of force is roughly the same as last year, at 823, with 28 of them resulting in a serious injury. There have 745 inmate-on-inmate fights so far, down 5 percent from last year.

Mr. de Blasio compared the effort to turn around the department to historic pushes for reform in the police department, in the days of Frank Serpico and widespread corruption in 60s and 70s.

The 14-point-plan—which is aimed in large part at cutting off contraband in part through changes to visitation policies—is just the latest new proposal to cut back on violence and weapons in the jails. Even after a 36-hour lockdown removed 11 homemade weapons from cell blocks, there were five slashings or stabbings in the week that followed on Rikers Island, according to the Associated Press, perhaps an indication of how stubborn a problem weapons are in the jail.

“It’s frustrating that these issues were not dealt with more fundamentally long ago,” Mr. de Blasio said when asked what he thought of the lockdown and the slashings and stabbings that followed it. “But now that we’re putting a very vigorous plan into place, you know, we’re—we’re on the offensive. We know, again, it will take time to be fully implemented and be fully felt, but we’re on the offensive.”

He believed the lockdown “was a smart move” given the trends in violence Mr. Ponte had seen, he said, adding that “vigorous, decisive” action was necessary.

Some union officials have argued that the city’s move to end punitive segregation for those under 18—and eventually for those under 21 by the end of this year—and limit its use for others has emboldened inmates to act violently. But the mayor argued today that Rikers Island was rife with violence even when punitive segregation was more widely used.

“The actions we took on punitive segregation were the right thing to do from a human perspective, but they were not taken in isolation, that’s why you are sitting where you are sitting right now,” Mr. de Blasio said of the new high-security unit. “A method that proved to be very problematic and had many unintended consequences has been replaced by what I think is a much smarter strategy—to focus on those with a propensity to violence, and do it in a way that we think will be more effective for the long-haul.”

Mr. Ponte, like the mayor, allowed that the violence had left the department “frustrated,” but said the units would be effective.

Among other aspects of the 14-point-plan is the increased use of sniffing dogs to detect contraband, changes to how inmates are classified and housed to split up warring gangs—often the cause of stabbings and slashings, changes to the department’s crisis intervention policies and an beefed up investigations department. 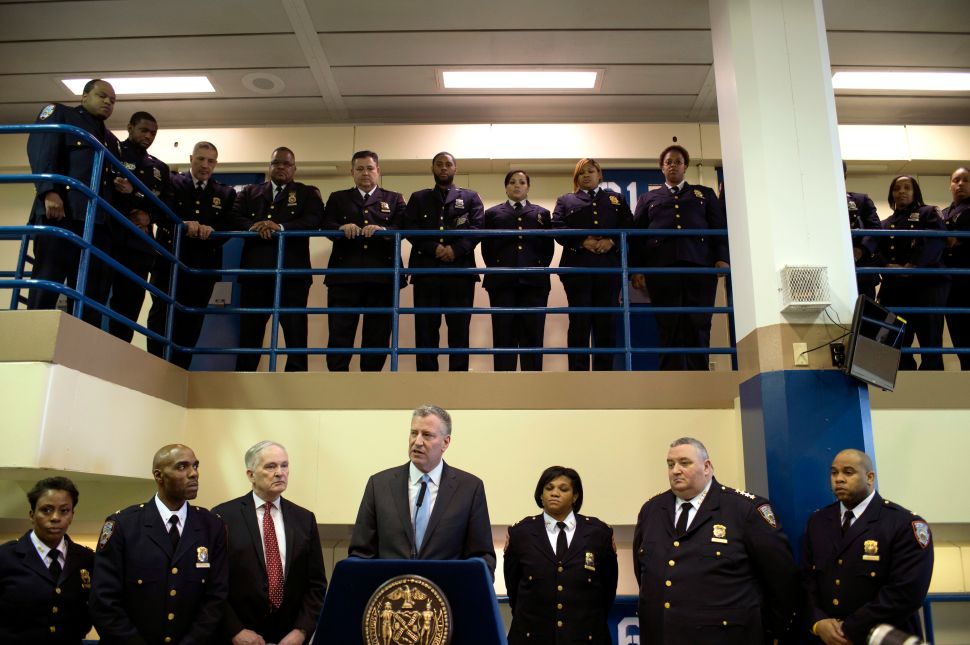