“We pick the headlines we read and once we’re finished reading that piece, we can move on, but for the families involved in the event that’s written about in that piece, they don’t get to just move on.”

This is John Ridley talking about the basis for the new ABC show American Crime. Ridley is the creator and Executive Producer of the series and brings his experience as an Oscar winning writer, having taken home the trophy for Best Adapted Screenplay for his work on 12 Years a Slave.

The series is about the aftermath of a brutal crime and, using a Rashomon type of storytelling, examines faith, identity and racial tension within several different families.

Ridley explains how the series came to be, revealing, “ABC came to me before 12 Years was even out with an idea about the kind of subject matter that they wanted to explore. So we took that opportunity to really think about what was the most compelling, human story that we could tell that was reflective of who we are as a society and that would really resonant with people.”

With the broad concept in mind, Ridley began to narrow the concept into a series idea.  “In the last few years, I’ve worked on stories that dealt with race struggles in America and that certainly influenced me, but it was really a conversation that I had with my son about the Trayvon Martin case that really struck me. It made me wonder, ‘what other spaces are there to talk about these types of things and at the same time show many different perspectives about subjects like this?’”

Speaking about how the Trayvon Martin case and other recent events, such as the situation in Ferguson, impacted Ridley’s creative process with regard to crafting American Crime, he says, “I think there is always a time for television to be reflective. As much as I like pure entertainment, I believe there’s value in presenting something in a provocative way, in a way that ignites passionate discussion. In that regard, it’s absolutely the right time for this show. But, having said that, think about it, this is show that could have existed 20 years ago and commented on the Rodney King incident. It could have existed after the Watts riots. It could have existed around Matthew Shepard. It could have existed during the Duke lacrosse incident or when the Central Park Five were on trial. Unfortunately, it could exist at any time because the central themes may change a bit but they’re always there, always inciting people to have opinions about what constitutes justice.”

When asked what kind of statement he’s trying to make with this series, Ridley responded with, ”At the end of the day, I’m just an entertainer, and I just don’t know if it’s my place to come into your home and answer questions. I think it’s a whole other thing to ask questions and let you decide how to answer them. That’s what we should be doing. I’m more concerned with creating emotions. None of us are more than our emotions. There are plenty of people on TV whose job it is to tell you what to think about certain things but it’s a whole other deal to try to tap into people’s emotions. For people to get caught up in something unexpected and have a feeling for things that they didn’t know was inside them, that’s the more emotional journey and that’s really what we’re trying to do here, rather than make statements about things.”

Ridley was quick to point out that although American Crime is not a true story, “you have to honor things that are going on in real life and you can’t be exploitive or sensational. We worked really hard to dedicate ourselves to what we wanted to say, which is talking about family and people who are caught up in something tragic that happened and how things can really spin out of control.”

As for the look and feel of the show, Ridley explains that elements in the production requiring taking some chances. “ABC really demonstrated that they were dedicated to the subject matter but there were elements of cinema that I thought that were not going to be accepted by the network – the shooting style, that we have very little music, that there are long scenes, that the editing style is a bit jarring and really forces people to watch. I was pleasantly surprised that the network was absolutely onboard with all of these things.”

In addition to this, Ridley and his writing staff were also able to adopt a writing style for the series that’s unique for broadcast television. “ABC allowed us to write our scripts as whole pieces, which may sound like a small thing but it’s actually a very big deal,” explains Ridley. “It was a big deal to say to them, ‘we want to write 50 page films and shoot without the act breaks that make this artificial rhythm within the episodes. This led to big discussions about how it would affect shooting and the rhythm of the show.  For our purpose we felt that the act breaks were artificial in that they force you to build toward these things that weren’t organic but were contrived.  ABC was very gracious to allow us to do it and what happened is that at some point a few episodes in, it wasn’t an issue anymore.”

With regard to his cast, Ridley has this to say, “I had actors who wanted to embody characters who are complex, not necessarily likable, but who are people that you could see their humanity and all of that worked in service of the story.”

The cast includes Oscar nominee Felicity Huffman and Oscar winner Timothy Hutton. Hutton took home the award for his role as an emotional unstable teenager in the film Ordinary People.  In the film, Donald Sutherland and Mary Tyler Moore play Hutton’s parents. Moore was also nominated for an Oscar for her portrayal of the cold-as-ice matriarch of the family. In American Crime it seems that Huffman has stepped into a role extremely similar to that of Moore’s while Hutton is now the patriarch desperately trying to understand what’s happened to his family. When this parallel was mentioned to Ridley, he seemed a bit surprised (in a good way!) and responded, “No one has brought that up to me until now, but I can see that. Thinking about it, it does seem that it is sort of coming full circle with Tim Hutton as the father here. The families in Ordinary People and American Crime are similar it that these are parents with good intentions but they lack the ability to communication effectively – with everyone. About Hutton he added, “To see Tim, all these years later, now in this an adult role and struggling with his children, is really an amazing testament to his abilities as an actor. He and Felicity are just phenomenal in this. I have to tell you that there were days we were on the set when because of them and the rest of our amazing cast, I just felt like a kid in a candy store. I kept thinking, ‘how did I get here again?’ I had a lot pinch me moments and the truth is I still feel that way about all of this.”

Speaking directly to viewers about the show, Ridley offers this, “I understand that because of the title American Crime people may think it’s a procedural or something along those lines. It does have elements concerning legal proceedings and it is about racial clashes within cultures, but more than anything it’s really a show about family and faith, both secular faith and religious faith, and about how people interpret that faith in their own lives. This is not languid storytelling, but does take its time in showing how these individuals develop given what’s happening to them. My hope is that people will be drawn to the show on the strength of the storytelling, the performances and the cinema of it.”

American Crime is a closed ended series, that according the Ridley, after 11 epsidoes will have definitive closure in all of the storylines. “The idea was always for it to be analogy. If we come back for another season, we’ll have a new inciting incident in a new city with different perspectives to examine.”

Ridley believes that viewers are actively searching for series like American Crime, saying, “I think that audiences are hungry for shows with content that really studies the human condition without any kind of filter. This is more than just a crime show and more than a show about making statements, it’s a show about perspective. A lot of times we get caught up in our own stuff and we never consider anyone else’s perspective. This is a study in how to gain insight into other people’s lives. It’s not a passive show by any means and my true hope this that this will sit with people long after they’ve watched it.” 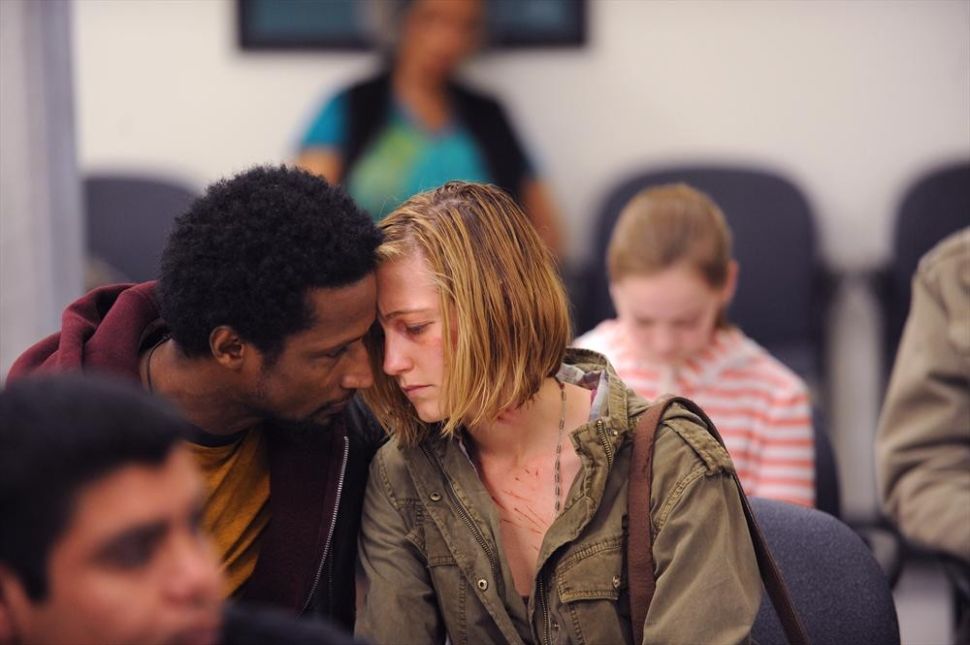