When she’s onstage, Anat Cohen likes to dance and snap her fingers while bantering with the audience and shouting approvingly at her bandmates. You get the sense she’s trying not to take things too seriously—until, that is, she brings her instrument to her lips and some truly deep stuff comes pouring out.

“I feel like sometimes I get even more goofy onstage than I am offstage,” Ms. Cohen told me recently at her Williamsburg apartment. “I’m not trying to make the music less than what it is. Even if it’s hard for me and I have to think about a lot of details, it’s none of the audience’s business. I don’t want them to feel that I’m having a hard time.”

Though she is no doubt technically skillful, there is a depth and immediacy to Ms. Cohen’s playing that has earned her the kind of success not usually reserved for clarinetists in modern jazz. This week, Ms. Cohen is releasing Luminosa (Anzic Records), her seventh album as a bandleader and her first CD in three years. Ms. Cohen, who is Israeli, has a strong affinity for Brazilian music, and Luminosa is in part a nod to the Brazilian singer-songwriter Milton Nascimento, whose work she describes as “pictorial” and “psychedelic.”

Ms. Cohen’s previous albums include Clarinetwork, a 2010 tribute to Benny Goodman, and Claroscuro (2012), which features a wide range of influences, including choro, a kind of Brazilian ragtime also spotlighted on her latest record. She is performing select compositions from Luminosa, among other tunes, at the Jazz Standard through March 8.

Luminosa has a light and diaphanous quality, though a number of musicians are on it, including her working quartet; Choro Aventuroso, a group she recently formed; the guitarist Romero Lubambo; and the percussionist Gilmar Gomes. “Happy Song,” which Ms. Cohen wrote, puts her in a trio with the drummer Daniel Freedman and the bassist Joe Martin, a refreshingly stripped-down setting reminiscent of Sonny Rollins’ 1957 album Way Out West.

“Why is it the trio and not a quartet?” Ms. Cohen asked playfully. “I could tell you it was an artistic choice, or I could just invent a story that the piano player was late for the session. Who knows? So I will not tell you that.”

The day before we met, Ms. Cohen had returned from touring Japan with the pianist Bruce Barth. But if she was jet-lagged, she didn’t show it. In conversation, Ms. Cohen, an energetic, curly-haired brunette, can be both mystical and surprisingly direct. Her apartment, which overlooks the East River, is bright and spacious and populated with instruments and books on music and psychology. Given that her album features a Flying Lotus cover—“Putty Boy Strut,” due in part to the influence of her keyboardist, Jason Lindner—I asked her what new music she had been listening to lately.

She paused for a moment. “Com Truise,” she said with a laugh, referring to the electronic musician whose real name is Seth Haley. What did she like about him? “I don’t know,” she said. “It’s something about the sound.” It was hard to tell if she was joking.

The pianist Fred Hersch, who has performed several times with Ms. Cohen, said she is “one of the most sincere musicians” he knows. “Anat has big ears and plays with an open heart,” he said in an email. “She is patient as an improviser, paces her solos beautifully and is not afraid to leave space.”

Ms. Cohen, who was born in 1975, came to New York from Boston in 1999. She is part of an influx of Israeli jazz musicians who have moved to the city over the past couple of decades, thanks primarily to the late Arnie Lawrence, an American saxophonist who established the New School’s jazz program. In 1997, he moved to Jerusalem, where he founded the International Center for Creative Music, funneling jazz musicians to New York.

Since she arrived in the city, Ms. Cohen has earned a reputation as the kind of sensitive musician who can perform in a wide range of settings, from Latin jazz orchestras to quirky trios. Her clarinet sound is rich and round and brings you in. New York Times opinion columnist Joe Nocera described her playing as a “revelation” in a 2013 profile, after he had seen her in a performance at Dizzy’s Club Coca-Cola at the Time Warner Center.

I first saw Ms. Cohen in a quartet at the Jazz Standard about five years ago, where she worked the audience like a snake charmer. She played “Memories of You,” which was Benny Goodman’s theme song, but it didn’t feel kitschy or sentimental. As she finished the tune, I noticed an old woman near the front of the club who was so moved by Ms. Cohen’s clarinetwork that she had begun to cry.

Ms. Cohen, who also plays tenor saxophone, stands out among the few jazz clarinetists on the scene today. Her music doesn’t alienate; it isn’t academic or overly focused on the past, yet it isn’t unconcerned with it either. She is one of those rare jazz musicians comfortable occupying the dual roles of artist and entertainer, like the alto saxophonist Lou Donaldson or the trumpeter Clark Terry, who died two weeks ago.

With that in mind, I asked Ms. Cohen if there was ever a time in her career when she felt like she had to hold back her personality onstage in order to give her music the kind of seriousness a lot of listeners expect from jazz.

“Yeah, I didn’t like it,” she said bluntly. “The music is serious already.” 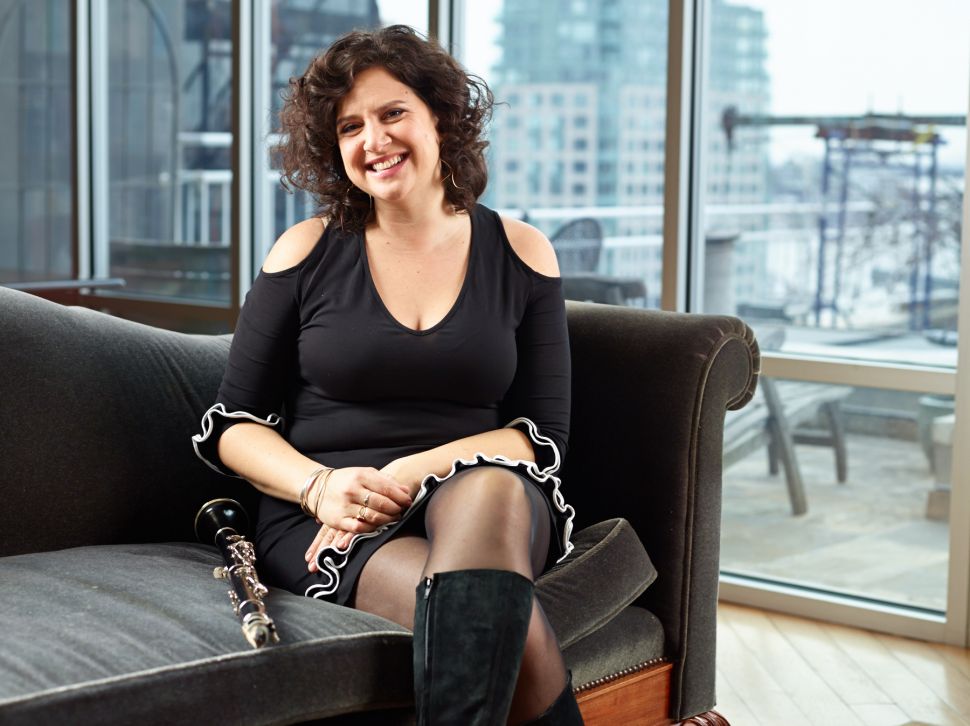