When taking in an important and historic television event, it is important that your own mise-en-scène match that of the show. This is why people mix up old-fashioneds when watching a Mad Men premiere, make fascinators out of napkin rings for royal weddings, and get beauty-queen blowouts before a new season of Keeping Up With the Kardashians.

So who could turn down an opportunity to take in the first episode of E!’s new scripted TV show, The Royals, in a lavishly appointed suite at the New York Palace Hotel? The suite, by the way, runs $20,000 per night and practically boasts a bidet around every corner. This was a PR invite we would not be turning down.

Upon arriving at the hotel, we made our way to the appropriately named Royal Suite. This cluster of rooms is the brainchild of French interior designer Pierre Court, but was recently altered in honor of an obscure Middle Eastern royal family who wanted to live there for a bit. Paris by way of Dubai—that explains the upholstered walls and preponderance of gilding.

In addition to the opulence, the idea of a foreign sultan landing in the appropriately named New York Palace hotel induces a chuckle. It is reminiscent of the scene in Coming to America when Eddie Murphy, a prince in search of a royal escort, reasons that his odds will be best if he stays in the borough called Queens.

As it turned out, the renovation scheme apparently hadn’t included a tricked-out TV system; the cable was on the fritz. The party ended up switching to another suite a few floors below just in time for The Royals to begin. This one, the Jewel Suite, designed by Martin Katz, was actually a slight upgrade; it runs customers $25,000 per night.

In the second suite, which had a modern-Gatsby feel, we took our places on an array of plush couches to watch the show.

Improbably, the first scene opened with the screaming guitar riff of the Rolling Stones’ “Gimme Shelter” as Elizabeth Hurley, playing Queen Helena, completed an Aaron-Sorkin-style power-walk through her palace grounds. She looks amazing and barks, for the first of many times this episode, “I’m the queen of England.”

Next, an American girl, who we will later learn is Ophelia, daughter of the royal family’s head of security, saucily flirts with Prince Liam by yelling at him from a balcony at a college party. Behaving like the love interest in an early direct-to-VHS Olsen twins movie, he delivers some line about how “some things in life are sacred,” including “a woman in your bed,” while hitting a bull’s-eye without looking at the dartboard.

The two of them make their way into a hallway, making out and clearly intending to take this party into the prince’s private quarters. Meanwhile, we are introduced to Princess Eleanor, a delightful combination of Kate Middleton in Lindsay Lohan. In what is no doubt one of the longest montages in television history, we watch as the prince beds Ophelia and the princess dances on a table in Paris.

After the montage finally ends, we are treated to La Hurley’s second scene, which includes her shouting at her onstage daughter, “ROYAL BEAVER?!” while holding up a newspaper that says as much:

Poor Princess Eleanor accidentally flashed a bunch of photographers during her fun night out, and now her crown jewels have made it to the front of Tube Reader daily.

Prince Liam admits that he had “irresponsible, but protected, sex” with Ophelia. In my mounting champagne haze, I “hilariously” quip, “BUTT PROTECTED?!” and the other reporters at the screening chuckle politely.

Right, then, no more bubbly.

Next, we learn that a royal older brother, Prince Robert, who we have yet to see onscreen, has died. The other royals are upset, but they don’t make a huge deal out of it; stiff upper lip and all that. No cause of death is given and while sad, everyone seems alarmingly at peace with this lack of intel. A grieving Princess Eleanor sleeps in her sequined dress and smokey-eye makeup, waking up the next morning to look like your average hard-partying posh bird. “I owed him a call,” she mutters to Prince Liam of their deceased brother. She is rapidly becoming the show’s most likable character.

Next, we are introduced to the show’s Bizarro Beatrice and Eugenie, a pair of lesser royals who pull up to the palace with a collection of mismatched dogs. They really nailed the casting with these two; they have that quintessential eccentric-British-noble look. By the way, about half of the characters are perfectly cast (Queen Helena, Princess Eleanor and the evil Cyrus) while the other half (Ophelia and Prince Liam come to mind) leave much to be desired.

At a dinner, the drab, blink-and-you’ll-miss-him King Simon announces that he has put forth a bill (sorry, what’s British for bill?) to Parliament proposing the nation abolish the royal family. The public and the royal family alike are ALARMINGLY cavalier about this development.

Meanwhile, the queen is angry that Prince Liam cavorted with Ophelia, although Ophelia is all, “It was just a one night stand, chill out, everyone.” Despite the purported one-nighted-ness of this particular stand, though, Ophelia attends not only a private royal dinner, but also Prince Robert’s funeral. She even is photographed standing on the steps, at the royal family’s side. Is it normal for any royal girlfriend, let alone an American who is one of the help, to pop on a fascinator and stand next to the prince at his brother’s funeral? Um, no. The mere existence of this character, and her ability to infiltrate the royal family, is a testament to the American public’s inflated sense of importance when it comes to other cultures; E! must have assumed the show would not be successful without a pretty American dating the prince.

In the car after the funeral, Queen Helena fusses with the mesh on her fascinator. It is delightful to see an upper-crusty Brit utterly confounded by her insane ceremonial hat. Then, Prince Liam pisses her off by being too emotional, and she slaps him. Long live the queen.

Next, Ophelia yells at her dad, the royal family’s head bouncer, because he doesn’t visit her deceased mom’s grave enough. Do people actually care about that? This is another scene that is reminiscent of a bad Mary-Kate and Ashley movie. Ophelia has got to go.

Princess Lindsay Lohan then gets Bizarro Beatrice and Eugenie high. “Get in here, you daft bitches,” she yells, before presenting the Royal Bong. Alexandra Park, the actress playing the princess, is truly amazing. Not only does she look exactly like Elizabeth Hurley, but she also nails her onscreen mother’s general demeanor. Later, overcome with the munchies, she will devour some sort of mashed-potato-pie that belongs to the prime minister.

Evil uncle Cyrus then calls a scantily clad maid into his chambers. Her outfit is totally unbelievable; there is no way any self-respecting royal female would allow the help to walk around the palace dressed so sexily. The maid says something to him like, “I’ve heard other maids have had to do certain things with you.” And Cyrus replies, I shit you not, “You’ve heard that they had to HAVE SEX with me.”

It is at this point that the reporters present at the screening can no longer stifle their amusement; the floodgates have opened and we are all now dying laughing at the show’s dialogue, which is just a tad less believable than that of Gossip Girl.

Evil Uncle Cyrus then unzips his pants and says ,”Even the President of the United States said it wasn’t sex,” referring not-so-poetically to Bill Clinton’s Lewinsky era. Guess E! is betting Hillary won’t win in 2016.

Next, the king and queen chat in their bedroom. “Your daughter is rolling balls in the kitchen,” King Simon says, referring to Princess LiLo. Elizabeth Hurley has another “I’m the Queen of England” moment, when she points out that the King has no right to try and abolish the monarchy. “The British crown has been defended for thousands of years… You’re the King of England, God dammit, act like it.”

The next day, Ophelia, who looks more and more like Audrina Patridge, has a confrontation with Queen Helena. Ophelia assures the queen that her relationship with Prince Liam is not a relationship, per se.

“Of course it’s not,” the queen spits back.

“You’re the Queen of England, I get it,” Ophelia says, because Elizabeth Hurley has already delivered her signature line about 100 times this episode. “But your son isn’t my problem.”

“I’m the Queen of England,” Liz reiterates, again. “If you still had a mother, you’d have better manners. Now curtsy to your queen and walk away.”

Ophelia is no match for Queen Bitch Helena. She misses an opportunity to be like, “LOL too bad I’m American, remember when we kicked your asses in the Revolutionary War?” Instead, she throws her dearly departed mum under the table, saying, “My mother never taught my how to curtsy.” Um, Ophelia. Not a good comeback.

In the next scene, Princess Eleanor is really playing up her party-girl death wish by strutting in her thigh-high stocking feet on the top of her balcony while she swigs red wine straight from the bottle. Ophelia walks up, and we ascertain that the two of them have actually been friends for quite some time. Princess LiLo and Ophelia share some words about Ophelia’s parents; the conversation is meant to add depth to Ophelia’s character, but it never will because the actress playing her is just too boring. It ends with the princess saying, “Your dad’s a badass.”

“You’re a badass, too,” Ophelia says, then walks away.

“No,” Princess Eleanor says to herself before taking another swig. “I’m just a bitch with money and power.” Now THAT’S badass.

Next, there are about 15 more scenes that seem like they have to be the last scene in the show, but they aren’t. Princess Eleanor goes to Paris, the King almost gets shot by his evil brother, an Irish security guy tells the prince that Liam is an Irish name, etc. etc. etc. At this point, I don’t even remember what the last scene was. Nobody does.

One thing is for sure, though. It might not be prestige television, but The Royals has just the right mix of Dynasty-esque camp and unlikely Degrassi plot turns to keep us tuning in—even if we aren’t watching from a $20k triplex hotel suite. 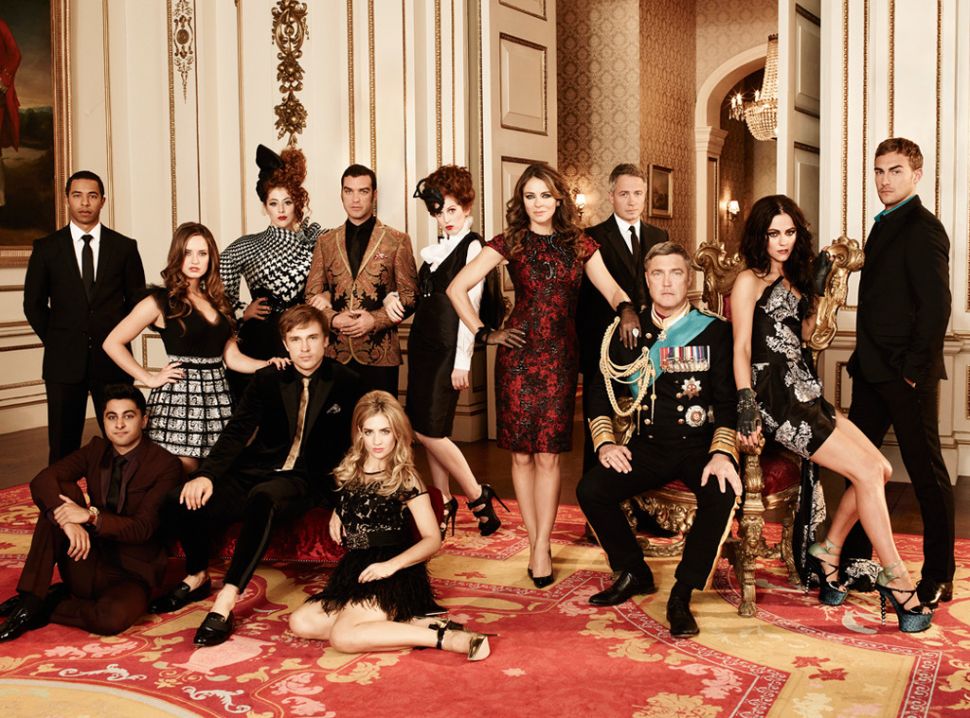