For Ukraine, it was a year of living dangerously. The Euromaidan protest movement a year ago, brought down the corrupt government of Viktor Yanukovych. Ukraine’s nuclear neighbor invaded Ukraine’s Crimea and then Eastern Ukraine. The “local crisis” turned global as Malaysian flight MH17 was shot down killing hundreds of innocent civilians, many of them from European nations. Russia’s propaganda machine went into high gear, blaming Ukraine for the turmoil while denying Russian military involvement. Europe, the United States and others punished the aggressor with sanctions. The UN Security Council opined. Russian tanks and heavy artillery rolled, achieving military objectives on the ground whilst sowing deception and fear in Ukraine and abroad.

Contemporary Ukraine is a country twenty-five years young, an ex-Soviet republic of 47 million people finding her identity as a transmodern European nation. The Euromaidan movement, as the name implies, sought to bring political reform in Ukraine up to European standards. Maidan is a Persian word meaning “town square.” The goal set forth by Ukraine’s populace is not lost on Ukraine-watchers and Ukraine’s many friends around the world. The Ukrainian diaspora is large and the Ukrainian spirit is alive well beyond Ukraine’s borders. Many people around the world want to see Ukraine prosper as a free and sovereign country, asserting her ideals, aspirations and will as a nation of free people. The millions of free people in the maidan during the events of March 2014, which I wrote about here almost exactly a year ago, is precisely the image Ukraine ought to project.

In the early 90’s, world perceptions of Ukraine were colored by its Cold War past—a soviet-style economy and culture that would require serious transformations. Ukraine’s civic institutions were weak from communist pathos. A generation would have to pass, it seems, before democracy and free markets would take root. But Ukraine did not want to wait for this slow change. The Orange Revolution of 2004-2005 was an overt signal that the corrupt realpolitik in Ukraine was untenable and change needed to take place sooner rather than later. The political dialog resulted in new leaders with real political will. Ukraine projected the image of a progressive political class in the post-soviet space. Insulted by the turn of events and eager to maintain its dominance in the region, Russia actively influenced the election of president Viktor Yanukovych in Ukraine. The result turned the tide back to “friendly” relations between Kyiv and Moscow in 2010. Oligarchs fought oligarchs, and the people lost.

The overthrow of Russian puppet Viktor Yanukovych in Ukraine one year ago brought relief to Ukraine’s political problems, but only briefly. The overthrow marked the last insult to Russian de facto dominance in the region, and retribution was swift. The punishment started by the illegal annexation of Crimea and then continued with the invasion of Eastern Ukraine. The undeclared war with its neighbor Ukraine coupled with an aggressive propaganda campaign by the Kremlin was as cynical as it was overt.

The ethnic makeup of Ukrainians and others in Ukraine is a result of centuries of migrations. In more recent soviet history, forced migrations and collectivization mixed the ethnographic makeup within Ukraine’s borders. It includes ethnic Tatars, Poles, Greeks, Turks, Jews, Russians and many others. A multi-cultural ideal of mixed racial self-identification is a healthy cultural attitude for Ukrainians. Ukrainian nationalism as an expression of secular civic pride is a similarly healthy and necessary step in asserting Ukraine’s self-realization in Eastern Europe. This attitude gives way to a Ukrainian nationalism that is racially tolerant, fair, just and provides nuance for political dialog.

Ukraine will undo the shackles of empire, oligarchy and influence-peddling by Russia as a free, independent and sovereign nation. She is ready to leave behind an oppressive and cruel ex-boyfriend. The war has galvanized the Ukrainian nation; her future rightfully remains in the hands of its own people. There is no higher calling than to fight for the voice of freedom and self-determination. Ukraine is indeed pregnant with a European future. Russia’s behavior needs to be called out. It has subversively influenced Eastern Europe by conflict, deception, fear and death for too long. The world must stand with Ukraine and embody the values of civic freedom. The world must contain Russia under the watchful eye of Ukraine’s growing sphere of influence.

Andrew Oleksiuk is a computer professional and artist who lives in Chicago. 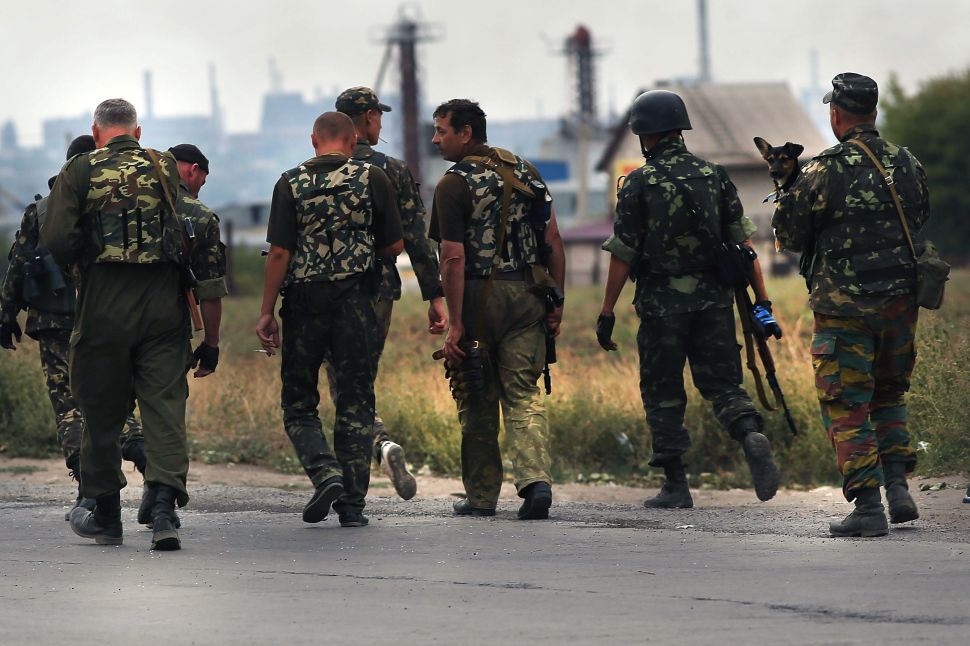