Members of the City Council’s Progressive Caucus today joined with minority activist groups to demand Gov. Andrew Cuomo appoint special prosecutors in police killings—and to trash the governor’s State of the State proposal to create an independent monitor to review grand jury proceedings when a cop is found not guilty of a crime.

“We need to reinstate faith and confidence in our justice system,” argued Mr. Reynoso, declaring he and other members of the Council’s dominant Progressive Caucus had signed a letter to the governor asking him to appoint a state attorney to take all police abuse cases out of the hands of local district attorneys.

The elected officials simultaneously insisted that a special prosecutor was the way to “take politics out of the justice system” and that it was the “progressive” thing to do.

Ms. Rosenthal aligned herself with state Attorney General Eric Schneiderman, who requested the governor—with whom he has an often frosty relationship—make him the special prosecutor for police cases.

The councilwoman even seemed to question Mr. Cuomo’s “progressive” credentials.

The governor also came under fire for his proposal that the legislature work with him to create an independent monitor to look at sealed grand jury documents and make a recommendation to him about whether he should appoint a special prosecutor.

“Governor Cuomo’s independent monitor is a distraction. It’s an opportunity for him to be the hero without actually doing anything,” said VOCAL-NY Political Director Alyssa Aguilera. Behind her, Mr. Menchaca said, “That’s right.”

For his part, Mr. Menchaca asserted that the call for a special prosecutor was not a criticism of district attorneys. He praised Brooklyn District Attorney Kenneth Thompson, who convinced a grand jury to indict Gurley’s killer, Officer Peter Liang.

“This is not about D.A.s being bad actors. In fact, in Brooklyn, we have a really great district attorney,” Mr. Menchaca said. “Our governor, today, with his pen, could already make a major change to the way that relations happen by bringing a special prosecutor to address the issue between police and community.”

One of the speakers at the demonstration was Hawa Bah, mother of Mohamed Bah, a mentally ill man shot by police after he reportedly attacked them with a 13-inch knife. Despite expressions of sympathy with Ms. Bah, all Council members at the event pleaded ignorance of the details of her son’s case.

Hip-hop mogul Russell Simmons has claimed that Mr. Cuomo had promised at a private meeting with him to appoint a special prosecutor last December. The governor, however, has maintained his intention all along was to convince the legislature to pass a set of reform proposals—which the Republicans in control of the State Senate have indicated they are opposed to.

“The governor advanced a balanced reform package to increase transparency, accountability and ensure justice in perception and in reality,” a spokeswoman told the Observer. “The members of this group have endured unspeakable losses and we will continue discussions with them and other community activists, criminal justice experts and law enforcement officials throughout this process.” 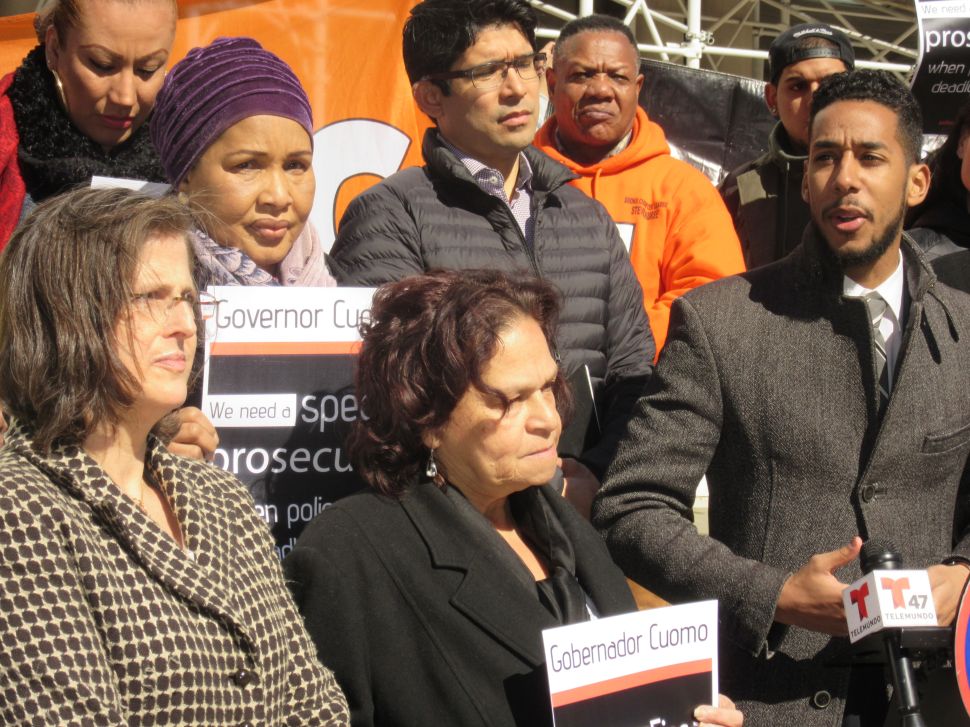