A group of protesters repeatedly interrupted Police Commissioner Bill Bratton’s budget testimony this morning, chanting “broken windows has go to go” and even calling Mr. Bratton’s mode of policing a form of genocide.

The protesters, led by activist Josmar Trujillo, have opposed Mr. Bratton since his appointment in late 2013. They gathered on the steps of City Hall this morning to denounce the City Council’s call to add 1,000 new cops, arguing the additional police would not address the problem of police brutality in minority communities.

But the relatively small group didn’t end their protest at an orderly press conference. On five separate occasions during Mr. Bratton’s preliminary budget testimony in front of an increasingly sympathetic City Council, men and women rose from the Council floor, where members of the public can sit, and the balcony to denounce Mr. Bratton.

One woman said the council members were all “sell-outs” for allying themselves with Mr. Bratton, who has angered some on the left for his support of “Broken Windows” policing, a focus on quality-of-life crimes that critics say victimizes communities of color. Mr. Bratton and Mayor Bill de Blasio say that form of policing is misunderstood and has dramatically lowered crime rates.

They were quickly carted off, but after the fifth disruption, a frustrated sergeant-at-arms made the rare move of dismissing members of the public from the chamber. (A Council spokesman said the last time members of the public were asked to leave was during a rowdy pro-Palestinian demonstration in January.)

Councilwoman Vanessa Gibson, the chair of the public safety committee, apologized to Mr. Bratton for the disruptions. The Council, dominated by progressives, has had a tense relationship with NYPD leaders in the past as they try to reform the department, but Ms. Gibson and Mr. Bratton were cordial. (Mr. Bratton and council members agreed that the department headcount needed to increase, though the top cop wouldn’t reveal a specific figure.)

“As Jimmy Durante used to say, ‘Everybody wants to get in on the act,'” he said with a smile. 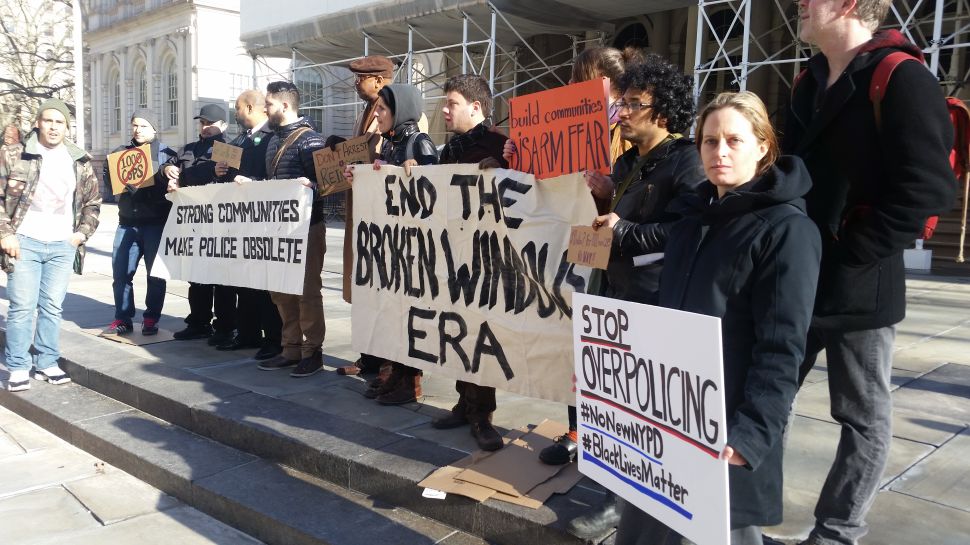