Pulse New York, open Thursday through Sunday at the Metropolitan Pavilion in Chelsea, has great moments and not-so-great moments. Among the greats are the artworks of Pulse Projects, large-scale installations spread throughout the fair that spotlight innovative contemporary works. These are the pieces you come across at an art fair that make the trek through the snow worth it.

Upon entering the fair, take the first left and you’ll find Pulse Play, which features a rotating exhibit of video pieces that top out at eight minutes each. But just outside the room, None Jonathan Calm’s 2008 video installation Scudder Towers Down will stop you in your tracks.

The piece is a stack of three TV sets that play the same one-minute video loop at different intervals. A somber apartment building is slowly demolished, crumbling to the ground and then rising again when the video is rewound. The subtitle of the work, “After Scudder Homes, Newark, NJ,” references Newark public housing projects the Edward W. Scudder Homes, which were torn down as part of the city’s major public housing demolition initiative in the late 1980s. The artist also grew up in a public housing complex, climbing seven stories every day to his family’s apartment in the Linden Houses of East New York.

“I remember those stairs as a test of courage, a passage to get through as quickly as possible before something bad could happen. It was a daily reminder of a simple truth—architecture matters, the core premise of my work over the last ten years,” Calm said in the artist’s statement. The piece creates an uncanny sensation, as if you’re watching a wave overtake the building and then pull back again.

Robert Montgomery’s Wooden Houses is a text installation lit with LED lights, and it’s striking for both its lyricism and its relevance during a week when nightmarish weather has made New Yorkers crankier than ever. “THERE ARE WOODEN HOUSES ON LAND IN FARAWAY PLACES THAT DON’T COST MUCH MONEY AND STRINGS OF LIGHT THAT MAKE PATHS TO THEM GENTLY AND DO NOT TURN OFF THE STARS,” it reads in oak and polymer letters. It hangs on a wall on the right-hand side of the fair’s first corridor, and you might walk past it if you’re not careful. But you shouldn’t miss the chance to stand in front of it and dream of a place with less snow and more grass, before heading back out into the cold. 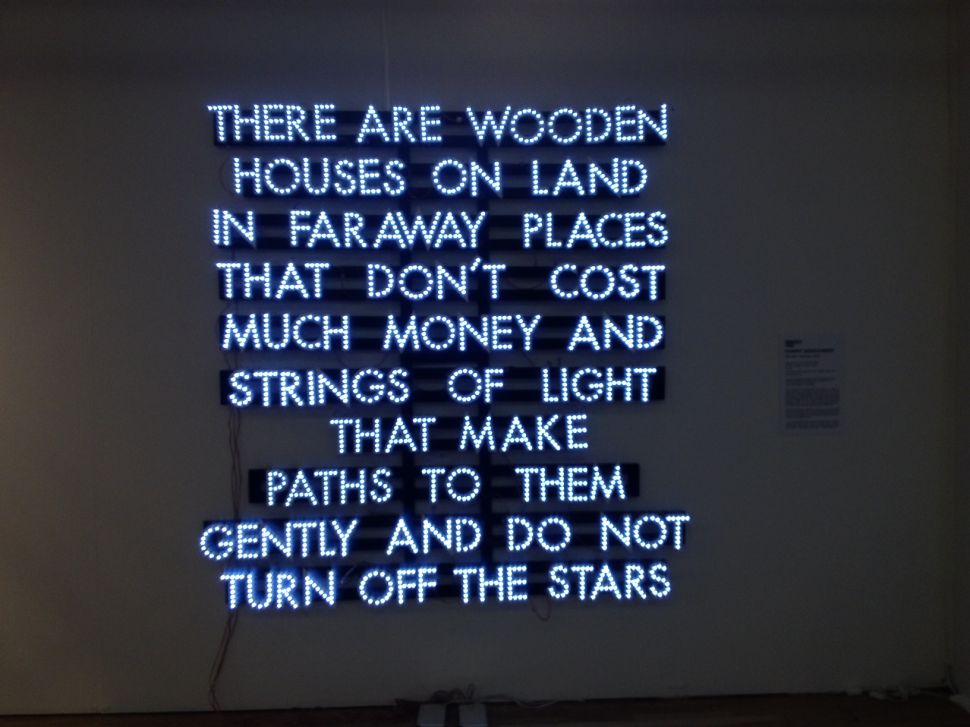