Tony, a man who had two ex-girlfriends show up to a house where he lived with a third girl he is hooking up with, then hooked up with all three of them within the span of an Eddie Murphy / Nick Nolte movie, is driven to jealousy-induced insanity over the arrival of some dumb flowers. The bouquet’s arrival provides more character development than any of the rote Real World cast interviews. For example, Tony threatens to get rid of the flowers by saying, “I’ll throw them bitches out the front door.” Have you ever heard a human being refer to flowers as “bitches” before? I have not. Why throw them out the front door? Why not into the garbage? Why not out the window? Why not into the Chicago River? The flowers, like all the roommates’ Skeletons came in the front door therefore they must leave through the front door. Madison, on the other hand, admits that she has never received flowers as beautiful as these regular flowers.

Last week, I was simultaneously relieved and disappointed by Madison’s Skeleton. I was glad it was her sister and not her drug-doing, jail-inducing, terrible ex-boyfriend. Even though I wanted to see her ex-bf. But I didn’t. BUT I DID. This week, we learn there is another ex-boyfriend. His name is Skyler and he’s just you know, “doing the military thing.” He didn’t get her hooked on drugs. Actually, the drugs ruined his fling with Madison. He has a chest tattoo and some other unidentifiable body art closely resembling the tape that Six-Feet-of-Sunshine, Kerri Walsh puts on her shoulders during summer Olympic volleyball. He also calls Madison the “great white buffalo.” He’s every guy that loved a girl so hard in high school that it never, ever, ever goes away no matter what she does, like making out with someone else when you take her to prom as your date or you know, like doing a boatload of heroin and going to jail. When Madison shows up with Skyler, Tony loses it. You can tell when Tony is losing his mind because he gets stuck in a loop, repeating himself over and over like a young, attention-craving Rainman. Tony has told everyone he comes across about the flowers showing up. He probably told the Married With Children fountain and the Perfect Strangers revolving door because they are not people that can walk away from him. When Tony’s boss asks how he and Madison are doing, he repeats “We’re good. We’re good. We’re good,” so many times that it sounds like the “It’s not your fault” scene from Good Will Hunting.

Because television is a great and wonderful mistress, she gives us many scenes of Tony and Skyler forced to hang together with Madison. Tony hits him straight off the bat with “You know that’s my girl, right? Why you taking her out on dates? Nah, I’m just kidding. HAHAHAHA” *mean mugs at Skyler, slowly drawing his finger across his throat and mouthing “you’re dead.” And Skyler’s thinking like I’ve loved her way longer than you, you didn’t even watch her spin out into drugs, she’ll be mine someday if I just stay by her side and act like a non-threatening friend. WHO WANTS TO SEE ME PUT LEMON JUICE IN MY EYE, HAHAHA, isn’t that funny, I’m so non-threatening, Madison is my bffffffffffffffffff-I LOVE HER-er, uh-bffffffffffffff. And then Madison is like, hey isn’t Skyler great? And Tony’s like “I don’t give a fuck about him. No, just kidding. But not really because I’m the only Tony Raines, I’m the champ, There’s no TONY 2.0, I’m not even jealous that you went out on a date with him because I said “get me a doggy bag,” but I don’t like this, but I’m fine. FEEEEEEELINGS, nothing more than FEEEEEEELINGS. I never had anything growing up. T-Raines, yo.” And every houseguest who thinks Tony treated Madison poorly, which is all of them except probably Bruno, thinks it’s great that Tony finally got a small taste of his own medicine.

Tony has a meltdown at the house. He throws them bitch flowers, but not out the door. He tosses them off the balcony, vase and all, into the kitchen. Then he flips Skyler’s bed and goes to toss that over. Tyler just has this look, like this dude is crazy but he could throw me over the balcony if it meant Madison would be mine again. Finally, Madison calms Tony down and he drifts off into Tony-sleep, where Tony’s are King and all the woman are attracted to him. The next morning, he and Skyler make up as friends as Skyler reveals that it would be crazy for him to come into the house and try to make a move on Madison, the woman he always has and always will love. Then, just like that, poof, he’s gone.

Tony isn’t the only houseguest with woman-drama. Bruno takes Carla out on a lovely date. When he’s into a girl he will do anything for them because he’s a guy that likes Chick Flicks and junk. He wants his night to be just like a scene from The Notebook. I have seen that movie over twenty times. And I explicitly remember the scene when Noah takes Allie to a Carmichael’s steakhouse on the West side of Chicago and Allie is like why didn’t I hear from you and Noah is like “I BOUGHT YOU 365 SIRLOINS!!” I get teary-eyed every time I think of it. But Bruno gets into a fight with Carla because she wants to cut his hair for free and she won’t tell him how much it costs. And she asks if this is a joke and he his Joe Pesci impression, “So I’m a joke now?” Honestly, I have no clue what the hell Bruno is saying half the time or why he gets into these fights. He throws Carla out of the house but then he calls her later and they make up and she says “Bruuuuuuun-O, I’m done with these cameras” and she tells him she loves him. Later on, he’s not supposed to leave with her but he does anyway. I mean what are they going to do, kick him off the show? He’s already nearly punched his girl roommate, broken half the house, been verbally abusive, and threatened everyone. But yeah, you left when you weren’t supposed to, so you gots to go homey.

With all the Skeletons gone, the gang goes out to have fun. Jason is making out with a friend. Tony and Madison are happy. Some guy is buying Nicole shots and dancing with her. Good night. Then Tony steals a bottle of wine and gets caught. He gives the bar his credit card but knows it’s going to get declined. Sylvia is pissed. Jason is pissed. Nicole who is a lesbian, makes out with this male stranger, Zach, my new favorite character on Real World, JUST to get him to pay for the bottle Tony stole. AND HE DOES. Good for Zach. Also, it sounds like it was a $20 bottle of wine. I’m not judging anyone’s finances but if your credit card does not have space for $20 on it, that is problematic. In the car, Sylvia is furious that Tony would do that. Apparently, it’s not the first time Tony has jacked something. She feels like it makes all of them look bad. Nicole stands up for Tony. There’s this whole idea of “he’s our boy, we have to have his back no matter what” being thrown around. But mostly, I think people are sick of Tony and Bruno’s bad behavior. Sylvia calls Tony “white trash” for stealing. Tony has meltdown #2 of the episode, complete with shadow-boxing, stomping, shirt-grabbing, and an incomprehensible anecdote about not having the kind of air conditioner where you can adjust the temperature in his house growing up. Sylvia and Jason feel like Nicole makes excuses for Bruno and Tony no matter what they do but she holds Jason and Sylvia to other standards. Nicole gets sick of hearing Jason screaming about her and goes to confront him. The episode ends on a cliffhanger.

Significantly absent this week is V. She’s around but doesn’t have a plotline. But she does have the best look of the whole episode. A wobbly, drunk Skyler is standing next to the hammock bed when V walks by him in a towel and shoots him a look that would melt your face faster than opening the Ark of Covenant at the end of Indiana Jones. He is baffled by it and stumble shrugs it off. THUG LIFE.

Things are pretty tense in the house and it looks like Jason is about to lose it on Nicole. I hope that’s just fancy editing but we will see. Next week is the season finale and I’m going to cry until Season 31 starts. 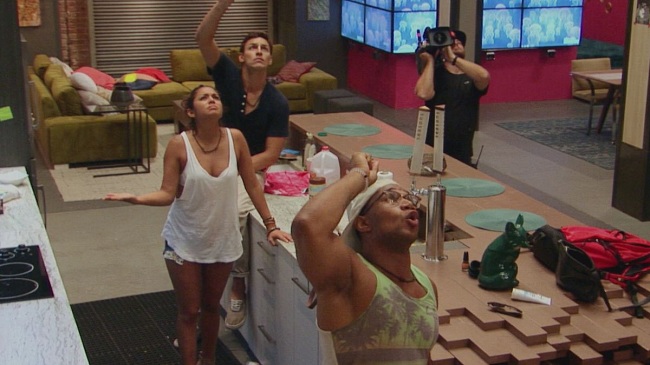