Pack the pastel tank tops, put away the purple lipstick, box up all your TURNT winter hats. This season of the Real World is ready to wrap. Or at least that’s the way the final episode would have gone if this was an ordinary season. But the Skeletons will not be going out like that.

Picking up right where things left off last week, Jason is mad that Tony stole a $20 bottle of wine, got caught, and couldn’t pay for it. Nicole stuck up for Tony because he is her boy. She made out with a BAR RANDOM, even though she has not hooked up with a dude in mad long, and there are easier (but less fun) ways to pull together $20 when you have six roommates (it’s like $3.50 a piece). Jason feels like if it was him that had stolen something, Nicole would have been lecturing him about it, but because it is Tony, she let him get away with it. Jason is screaming as much from the upper deck of the house when Nicole has heard enough and goes upstairs to confront him about it. Nicole gets in Jason’s face, the camera cuts away. Madison screams about Jason pushing Nicole. Nicole runs out of the room and gets in Jason’s face. Real World security, whose main job seems to be only to separate people once the fight is over, rushes in. Last week, I had been hoping that this was an attack from the Edit Monster—that son of a bitch who shows up to make it look like something dramatic has happened, and leaves you scratching your head when the footage from the show does not match the commercial. But it was not.

They didn’t show Nicole getting pushed by Jason. Later on in the episode, it sounded like Jason had also picked her up and put her against the wall. In a season full of awful behavior, this is the worst and the hardest to watch. Nicole’s tearful interviews about Jason taking away a part of her are heartbreaking. Everyone has had their own code all season: I’d never fight anyone. I will fight someone but only if they deserve it. I’d fight a guy, but never put my hands on a woman. My anger got in the way and I couldn’t control myself. I did that, but I regret it and need to move on. The scale of what is acceptable keeps getting weighed down with more garbage. Jason tries to talk to Nicole but she tells him that he’s dead to her.  The Producer calls and tries to send the roommates to group therapy. Nicole doesn’t go because she is too upset. Bruno doesn’t go because like 911, therapy is a joke. Joyce the therapist shows up and teaches the house that physical and verbal abuse is never okay and that we hurt the ones we love the most. Thanks, Joyce. Was Joyce on-staff? Was anyone ever like, hey we’re taking some unstable personalities and pushing them to the brink of their abilities to cope by uncovering the most sensitive subjects from their past and doing it with tv cameras trained on them 24/7? I mean I love the show more than anything but I’d be kidding myself if I didn’t realize that this is exactly what they are doing. Anyway, the therapy is an okay idea. It’s good to talk things out. But it’s amazing how nobody gets kicked out of the house anymore. They set some pretty strict precedents over the years. And just because a producer asks Nicole if she feels safe in the house and she says “yes, of course” doesn’t negate the fact that she is also talking about how someone has stolen a piece of her and that she has been destroyed emotionally.

A cab shows up and an older guy gets out. The last Skeleton shows up. Jason doesn’t recognize the man because he has never met his father before. What follows is one of the most awkward conversations of all time. Jason asks him where he’s been his whole life. Lafayette Ricks, which is an incredible name, says “you didn’t do too bad.” Too bad at what? What is he talking about? What are you referring to Lafayette? And despite me being furious at Jason for what he did to Nicole, I give him credit for laying into his dad. Lafayette explains that his relationship with Jason’s mom was a one night affair. Then he calls Jason’s mom “a decent person.” Imagine a stranger comes in off the street. You’ve never met him before. He says, “one night I banged your mom, she was a decent person I guess. Oh yeah, I’m your dad.” That is the person you put your hands on and throw up a against a will—not your best friend. Lafayette asks, “what are your plans for these years?” And Jason says “be the opposite of you.” The two go back and forth some more, you can tell neither really know what to say. They call each other buddy, and trooper, and boss. Lafayette also reveals that he used to model back in the day. Jason says he had the pictures growing up. Lafayette crushes it with well if you hung onto those pictures, you must not hate me too much. And the entire world slaps their foreheads and says, yeah or maybe the kid just wanted to know what his father looked like, despite the fact that he is modeling some jaunty sideways hat or whatever Jason was describing the pictures look like.

Throughout all of this, we are being beaten over the head like Captain Caveman’s prehistoric baseball bat that Jason’s dad is asking for forgiveness for what he did, while Jason is asking for forgiveness from Nicole. Does Jason forgive his dad? He’s open to it. He gets invited to the family reunion where he can meet his sister and brothers for the first time. He has a ton of siblings he’s never met. I wonder if their mom is also a decent person?

And this takes us right up to the end of the season. There’s only about fifteen minutes to wrap it all up. Which is fine because the longer the goodbyes go on, the more I cry about my favorite show going away. The final night out, Bruno doesn’t party with the group because he’d rather hang out with Carla and have a pillow fight. Bruno should not be allowed to take part in any activity that has “fight” in it’s name, even if the first part of it is “pillow.” He would probably flip out if one of his pillows got damaged and not speak to the gaffer for three years because of it. He wouldn’t be mad exactly about the pillow but he’d be furious that Carla offered to but him a new one. The rest of the housemates go out. Nicole and Jason dance together even though she screams at him, “I’m still mad at you.” The next day, during her goodbye she doesn’t speak to Jason. It’s still too hard for her. She ends the season in tears, not happy about how it all ended. It’s a gut punch the likes of which would defeat King Hippo. But it actually makes the reunion a must-watch. The rest of the roommates start to leave. Carla picks up Bruno. Madison and Tony go together. The girls all say how Madison is the strongest person they have ever met. She will need to be if she’s going to try to date Tony long distance. Here I’ll admit that it took me twelve episodes to finally realize that Tony has his name tattooed on his shoulder, backwards. They show him doing dishes with no shirt on. I knew he had something but I couldn’t read it. Tony backwards is Y not. Y not is a perfect way to describe this season. Is this a good idea? Who knows. Is it entertaining? Yes. Should we watch it? Y not.

I will miss them all. 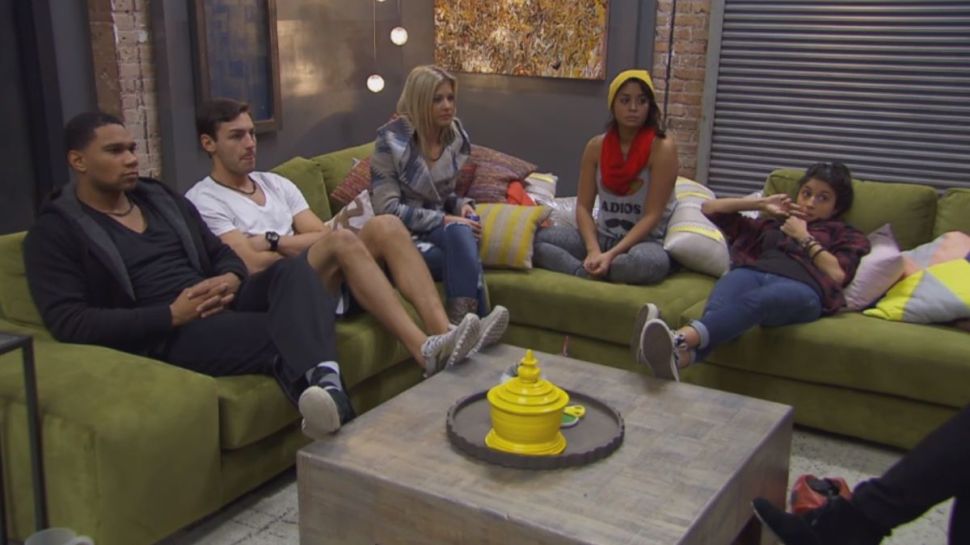