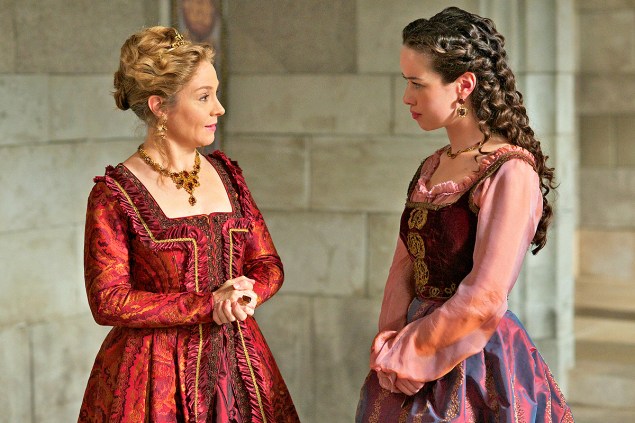 “Tasting Revenge” is the first episode back from a couple weeks off and as soon as the show opens, we’re greeted with party planning. God forbid we ever forget for a second that French Court exists in two time periods; party-planning and partying. A couple weeks ago, party-planning went into effect because the ladies saw the first bloom sprout up through the winter frost. Now we’re privy to a party being planned in honor of the tasting of a bottle of wine that’s as old as Francis. At least Kenna is taking the party planning like a pro, what with her insistence on putting together seating charts and carting around a giant folder with an air of authority. It’s a shame she lives in 16th century France and not 2007-ish New York City where she could be a Real Housewives-style event planning entrepreneur. That’s the drawback of being born a few centuries too early.

Another person born a few centuries too early is Mary. While the wine-tasting party is swarming with young women who have heard about the marital discord between the king and queen and are hoping to become Francis’s mistress, Mary can’t even float the idea of stepping out with Conde without words like “treason,” “Anne Boleyn,” and “beheading” bandied about. Otherwise, Mary takes the double standard in stride and is surprisingly cool about the fact that Court has turned into a depraved season of The Bachelor, what with a room full of young maidens desperately trying to shack up with her husband right in front of her. In an unforeseen twist, Catherine encourages Lola to join the competition, reasoning that she already gave Francis an heir and that she knows he already likes her. At the end of the day, Catherine doesn’t give a fuck that Lola is Mary’s best friend, she just wants her son to be happy.

Naturally, Narcisse jumps on any opportunity to manipulate Francis by offering up his niece who essentially looks like Francis in a dress. This isn’t an insult to the actress Siobhán Williams since Toby Regbo is very pretty. Craig Parker is only on screen for a few minutes, but he really makes them count, especially when he adds some extra sleaze to his voice when he hints at his niece’s sex jock proclivities. He doesn’t mentioning anything about her in the bath, so good for Narcisse for reining it in a little. Naturally, because Francis is an idiot, he sleeps with Narcisse’s niece despite the fact that the castle is practically infested with young women eager for a shot at becoming his kept woman. So, how many episodes until Francis’s conquest reveals that she’s pregnant? And then how many more until we find out that she isn’t even Narcisse’s niece and that she was knocked up well before she even came to Court? It doesn’t matter, Francis took the obvious bait from a man looking to gain any kind of leverage over him that he can, so this should all blow up in the boy king’s face any day now.

Francis then adds another bad decision to the growing pile by making a pass at Lola during a quiet moment with her and their baby. Lola makes one of the few sensible decisions of the episode and shuts that down, but she also talks Francis into allowing Mary to explore her attraction to Conde. Lola frames it under the guise of its what Mary needs to do to heal from both her marital discord and the trauma of her assault, but that she’ll eventually come back to Francis. I definitely didn’t buy that logic when I heard Lola say it and it definitely sounds even more ridiculous after I’ve written it out. However, I do appreciate the fact that Lola tried to level the infidelity playing field by insisting that Francis protect Mary while she’s doing the exact same thing that he is by stepping out on the marriage. Also, Francis forbidding Mary to sleep with Conde is just going to make her want to bang him more. Still, Francis thinks that if he let’s Mary get this attraction out of her system, she’ll eventually come back to him, provided that she doesn’t get herself executed in the process. Unfortunately, Francis has no idea that Mary won’t get herself executed until years after he is dead and gone. It’s a shame he doesn’t know, since that information could have saved him a lot of grief.

Except, Mary doesn’t get to bang Conde. After plotting a getaway to Scotland and finally getting Francis to agree to look the other way while the two get it on, provided Mary doesn’t get knocked up or caught, thus buying her and Conde a one-way ticket to the chopping block, a whole season’s worth of tension just amounts to a candlelit make out before the ill-fated romance falls apart. King Antoine plants a spy that sees Mary and Conde sharing a stolen kiss and a sexy snowball fight. Conde follows the spy and finds his brother King Antoine lying in wait, ready to offer up a verbal cold shower. Namely, that if Conde does have an affair with Mary, Antoine will have no problem sending both his brother and Mary off to the chopping block via outing him. Antoine is dead set on Conde taking the proposal from Elizabeth, thus having the two Bourbon brothers ruling a vast kingdom. Granted, Antoine does make a lot of sense in the sense that Conde is better off sitting on a throne as Elizabeth’s husband rather risking his life being the secret lover of a queen who could very well go back to her husband on a whim. That seed of doubt takes hold when Mary goes to him with the news that Francis granted his permission and (limited) protection in carrying out their affair and in the end, we see Conde meeting with Elizabeth’s envoy and moving forward with his engagement to the Queen of England. Still, after months of drawn out agonizing tension with Mary, damn, that is cold.

In other parts of Court, Kenna and Bash’s marriage seems to live and die by bad timing. When the previously cold and distant Bash wants to whisk Kenna off to a romantic vacation to Paris, she’s still hung up on Antoine and the promise of the life he can provide if she marries him. Unfortunately, Kenna soon realizes that she was just a tool for revenge against Bash when she invited what she thinks Antoine’s deathly ill wife to the castle, only to be greeted with the site a hugely pregnant wife. It turns out that at best, Kenna was only going to be a sidepiece. Still, Antoine decides that she wasn’t destroyed enough, so he leaves evidence of their not quite affair for Bash to find and freak out about. As it stands, Bash has a very consistent record when it comes to getting completely shafted in love triangles, love trapezoids and love rhombi. Maybe Bash should take a line of advice from The Wire’s Marla Daniels. The game is rigged, but you cannot lose if you don’t play. Maybe Bash should stick to chasing ghosts after all since chasing after living, breathing women isn’t working out so well.

Also, Greer is still living in poverty, but surviving thanks to her newfound skills as a madam. You can tell she’s living in poverty because they gave her the especially ratty wig to wear. Unbrushed hair = poor in 16th century France.. That being said, Greer has a pretty good thing going with her feisty women of the night. Leith didn’t seem to think so when he first came around to give her the news that Castleroy is serving a life sentence for treason However, Leith comes around after he sees Greer hurl an apple at a john who is trying to rough up one of Greer’s ladies. It’s hard out there for a pimp and so forth. The two finally get it on again, so we’ll see how that works out. Given all the rampant misery back at court, Mary, Kenna and Lola might be better off joining Greer down on the Renaissance version of skid row. At the very least, Greer’s rough living is worth it’s own spin-off. 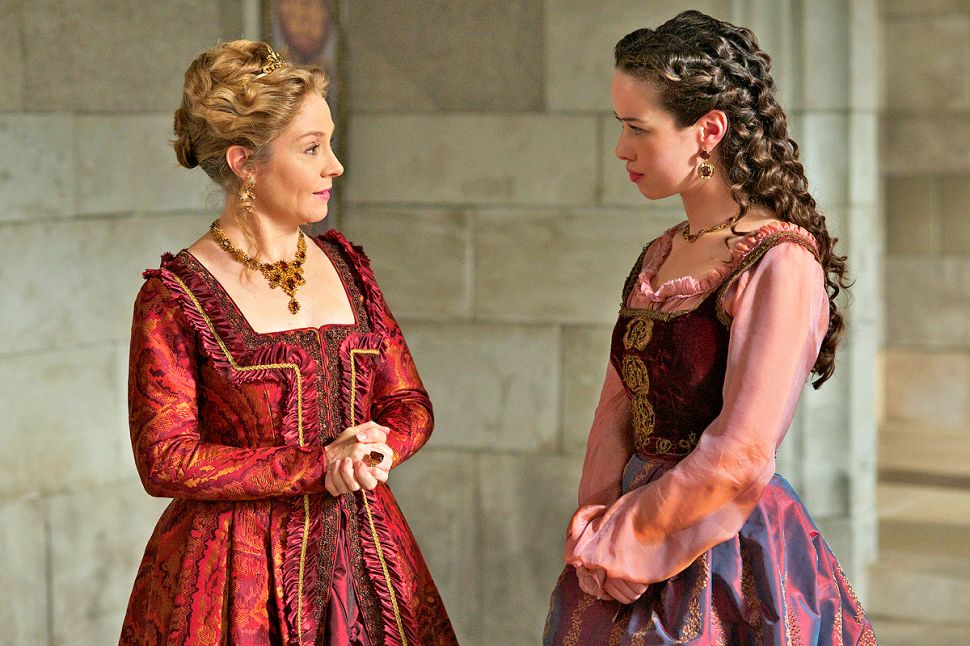