Just a week after speculating that maybe Francis has been alive for what seems like longer than his historical reign would allow, it’s starting. It’s the beginning of the end for the poor kid, what with the earache, the passing out and the blood gushing out of his ear, just as Hot Nostradamus foresaw.

Unfortunately, “Tempting Fate” is the last episode before a long break, so its gonna be a few weeks before we see how long the teen king hangs in there and if he and Mary can reconcile before he and his golden curls shuffle off this mortal coil.

A cursory search of the hashtag #frary will show that Mary and Francis shippers were having a really bad night what with Francis spending the night agonizing over the fact that Mary was doing a piss poor job keeping her affair with Conde a secret, especially from Catherine who has a sixth sense when it comes to duplicity at Court. Seriously, Mary, Francis asked you to do one thing and keep this fling under wraps. It’s been what, a few days before his mom is on to your trysts in the chapel? You couldn’t even shuttle this affair off to a remote, secluded location?

Mary’s affair with Conde reminds me of that Kids in the Hall sketch where Kevin McDonald’s character catches his wife (Dave Foley) and he’s not angry that she’s cheating, but angry that she planned it out so poorly, like when she booked her flight tickets to the romantic getway right next to her husband’s seat on the plane.

However, although Mary may not be winning any sympathy points with a large chunk of viewers, Frary shippers have to admit that given all that is stacked against this couple, rooting for them is like rooting for The Mets. However, the fact that Mary was finally consummating her attraction to Conde by a roaring fire and under an animal skin like the two were in a vintage Color Me Badd video while Francis was gushing blood out of his head doesn’t exactly endear her to an audience either.

Things aren’t looking great for Bash either. After a bummer of a goodbye where he passively ended their marriage by telling her to wait on annulling their marriage until she can find a worthy replacement before riding off into the forest to go fight forest crime only to get freaking impaled by a corrupt sheriff. Given the fact that the best medical treatment at the time was bleeding patients out, Bash should have been dead a thousand times over on this show. He definitely should have been dead after enduring a telephone pole sized stake being shoved through his midsection. Instead, he was “saved” by Delphine, the witch masquerading as a nun a few episodes back. With her hocus pocus, she manages to save Bash’s life from an injury that surely should have killed him instantly, of course, she’s going to want some kind of blood payment later on, cause I’ve seen enough episodes of Friday the 13th: The Series to know how black magic works.

Shit is really fucked up when Greer has the least complicated relationship on the show, given that she’s been banished from Court and living a life of happy squalor as a benevolent madame running a ring of prostitutes in a village of ill repute. Still, Leith isn’t happy with their arrangement and wants more with her, particularly a legitimate married life with legitimate children. So, Leith and his sexy beard march off to the cardinal asking for a papal favor in the hopes of getting Greer’s marriage to Castleroy dissolved. Can’t wait to see how the cardinal uses this as leverage against Francis, assuming the kid stays alive that long. Also, Leith is about to have his style cramped now that Catherine demanded that he act like a human chastity belt and guard Claude all the damn time after her persistent, but pathetic attempt to sleep with Narcisse despite being rebuffed. It seems that Narcisse would rather have a piece of Catherine. It must have been the time when he walked in on her in the bath that tipped the scales. While I applaud this union of two titans, I can’t help but be disappointed by the pause in his flirtation with Lola. Part of the intrigue was figuring out if his attraction to her was genuine, rather than his overwhelming drive to put his dick in anything wearing a corset. There’s also the fact that Lola was overtly battling her attraction to him despite the fact that all reason dictates that she should have been repulsed by this bath freak.

Speaking of Lola, she shows up for a minute, mainly to give her support to Mary over the secret affair that EVERYBODY KNOWS ABOUT! Hi Lola! Bye Lola!

Jesus, Mary, you had one job. Be discrete. If you can’t even do that in Court, how are you going to successfully run off to Scotland with your boy toy? It’s not like that isn’t already fucked up since the one messenger carrying instructions with the official royal seal was killed and the letters intercepted. Despite managing to coopt Elizabeth’s envoy under the treat of beheading for treason, Mary managed to get her plan back on track. However, unbeknownst to her, the communique did fall into the hands of Narcisse, who is the human equivalent of a basket full of vipers. History dictates that Mary does eventually make it to Scotland, but whether Conde makes it with her is another matter entirely, especially that Mary now knows that Conde has been accepted Elizabeth’s proposal in order to buy himself some time.

That romp by the fireplace better have been one amazing lay, because the constant fear of beheading hardly seems worth it. 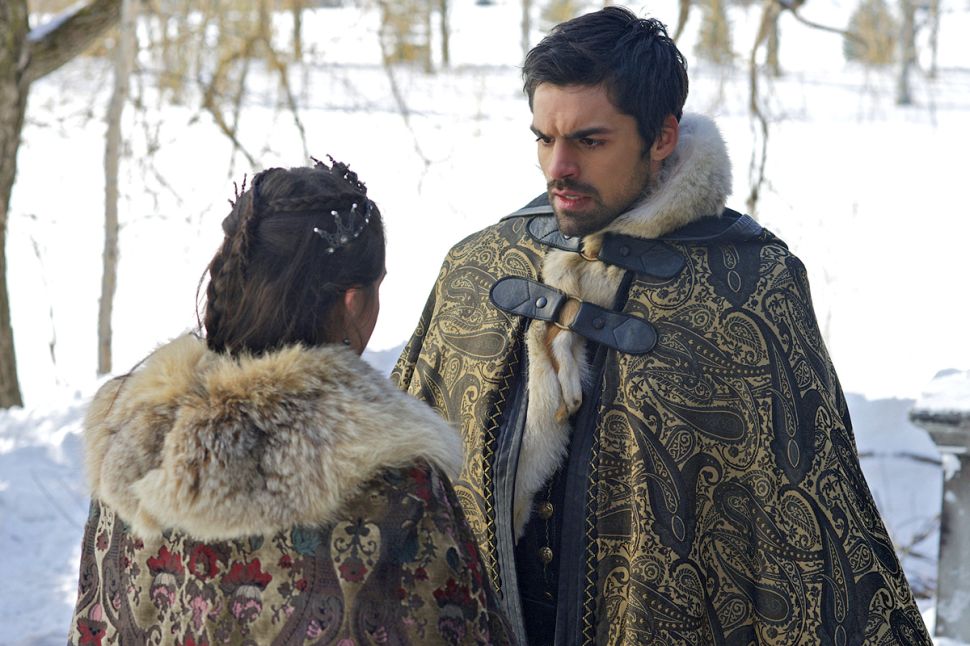