If you feel left out of the whole Twin Peaks phenomenon, we’re here to help! Every week, associate tvDownload editor Vinnie Mancuso attempts to figure out what the hell is going on in this town, while senior editor/Twin Peaks expert Drew Grant answers his questions. This week: ‘Lonely Souls.’

First order of business this week for the Laura Palmer case crew was to send Hawk to investigate Harold Smith’s apartment. The mystery thickened, however, when the only things Hawk found were a trashed apartment, Harold Smith’s flowers, and a peculiar pair of pants hanging from the ceiling, presumably to dry. 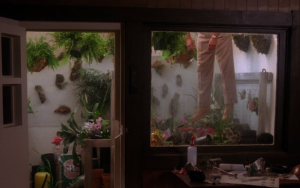 Whoa there! Dark joke, dark joke. But this was a darrrrrk episode, man. This was the big one! Laura Palmer’s murderer revealed! Woo! We did it! Well, there is SOMEHOW fifteen more episodes but for now, we did it, and no one can tell me differently.

In typical Twin Peaks fashion, this major episode lulled you into a false sense of security with some wacky townsfolk hijinks, then spent the last ten minutes or so bashing you over the face with a twisted nightmare fist, leaving you afraid, uncomfortable and oddly terrified of a name like BOB.  But before we get to all that…the hijinks.

The opening scene of this episode was fucking hilarious. It’s not often that Twin Peaks makes me laugh on purpose, but making fun of its own heightened sense of mystery and seriousness is a good way to do it. For anyone who hasn’t seen it, the Twin Peaks police department plus Gordon Cole and the One-Armed Man, who is at the moment presumably fully Mike-ified, are standing around drinking coffee and eating donuts. As tense music builds, Mike gives the exact  same “A LARGE HOUSE MADE OF WOOD” proclamation he did last episode, there’s a beat of silence, and then everyone goes on with their conversation and coffee drinkin’ as if to say “Yeah, we heard you the first time.” That by itself is funny, but the fact that there’s just this mysterious, ancient revenge spirit hanging around drinking coffee out of a mug is my favorite thing this show has ever done.

Ben and Audrey Horne have that awkward talk that every father and daughter must one day have, in which the daughter reveals the father tried to fuck her one time in the brothel the father owns. Ah, parenthood. Audrey also reveals she knows everything about One-Eyed Jacks, and asks if Ben ever slept with Laura. Of course he did. I’m starting to be suspicious of the people who didn’t sleep with Laura. Then Audrey asks if Ben killed Laura. Ben gets all weepy and says “I loved her,” which, great Ben but that really, really doesn’t answer the question. Side note: I love that not one person, even his daughter, ever asks Ben why he had a framed picture of Laura on his desk.

There’s this whole thing where Bobby and Shelly are trying to figure out how to live with Vegetable Leo, and Vegetable Leo keeps gaining consciousness to say “new shoes” and drool. Then Bobby finds a tape in Leo’s boot. All of this would be important if it wasn’t for…the return of Mike! No, not one-armed Mike. Two-armed Mike. Mike Mike. Where ya been Mike? Reading up on the latest copy of Haircuts for Doofuses?

Right as Ben is about to seal a deal with Mr. Trojamura, oh he of the plastic face, Cooper and Co. burst in to arrest him. At this time, Ben proceeds to shout “No! No! No!” like a small child deprived of his toys. Can confirm, it is hilarious.

Speaking of Mr. Trojamura CAHMAAAAAN of course it was Catherine in disguise. Look, I don’t know what this reveal was like back in nineteen-ninety-whatever, but no human on the face of this Earth looks like that. It didn’t help that the voice she was using sounded identical to Princess Leia disguised as that bounty hunter in Return of the Jedi. No, really. Go back and watch that scene from Return of the Jedi, then watch this episode of Twin Peaks. Actually, wait, no, go watch the entirety of Return of the Jedi and then don’t watch this episode of Twin Peaks.

It’s worth mentioning that at this point, we get the idea that something horrible is about to happen through brief glimpses of Sarah Palmer crawling down the stairs like Linda fucking Blair in The Exorcist. Does that happen in the Exorcist? Probably?!

At some point, the Log Lady shows up to drop some log wisdom on erybody in the police station. And by that, I mean this: “We don’t know what will happen, or when, but there are owls in the roadhouse.” Huh. Hopefully Patrick Swayze is around to deal with them!

Sheriff Truman, Cooper and the Log Lady head over to the local roadhouse and, alas, no Swayze. But Donna and James are there, sulking about Harold Smith’s death. “It’s not anybody’s fault,” James says. Hahahahahahahahah actually it’s yours.

Anyway, everyone is so busy being sad at this roadhouse that no one notices when the world’s worst stand up comedian shows up. 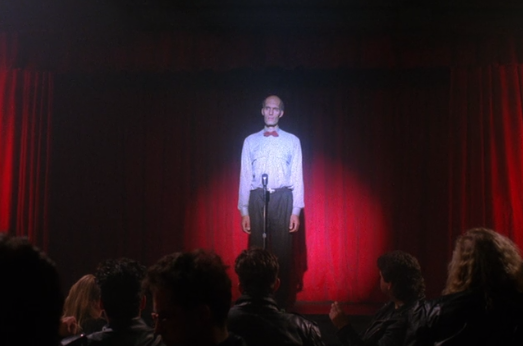 Seriously, he has one joke: “It’s happening again,” and he just repeats it. I DON’T GET IT.

But seriously, what’s the tall man referring to? What’s happening again? The answer, of course, is terrifying shit.

Maddie comes in, complaining that something smells and BOB/Leland doesn’t care about smells, he cares about killing the shit out of Maddie. In all honesty, this whole scene is awful and disturbing. As Leland chokes/pounds Maddie’s face in he turns back and forth between normal Leland and insane BOB. And Leland is crying and screaming “Laura!” and BOB is howling and slobbering on Maddie’s face and the whole time my face is like 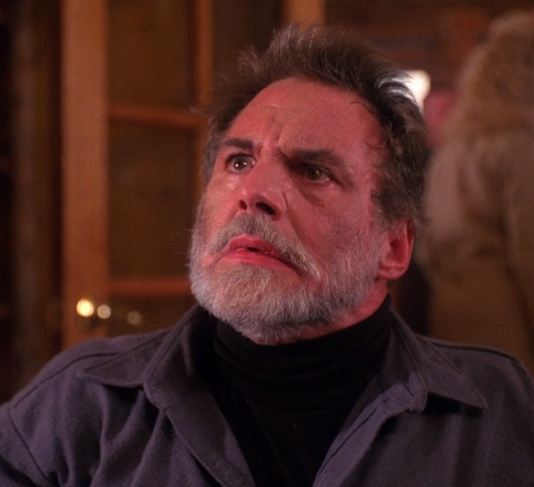 But it just keeps going. And going and going and man, it’s uncomfortable. Finally, BOB/Leland slams Maddie’s face into a wall, and the whole process is, mercifully, over. Apparently, everyone in Twin Peaks is mentally linked, because at the moment of Maddie’s death everyone at the roadhouse gets really, really sad, all at the same time. Especially Donna. She gets sadder than everyone else. Then again, Donna is always the fucking show off.

Whew. Dang. I think I might have some questions.

Sooooo BOB lives…in Leland? And Leland is BOB but but not always BOB? Just to be clear, BOB killed Laura, and Leland knows this?

Nuh-uh Vinnie. Not walking into that old trap.

Here is what I WILL say: David Lynch only realized after it was released that his movie Lost Highway was like, actually? Based on the OJ Simpson murders. The film where Bill Pullman wakes up in jail as Balthazar Getty was Lynch’s subconscious (or Transcendental Meditation-conscious) attempt to reconcile the fact that a man might be guilty and truly believe he is innocent. Leland’s relationship with Laura is portrayed so much more deeply in Fire Walk with Me that I almost don’t want to talk anymore about the Bob/Leland distinction till you’ve seen it, but basically the idea is: you can be a very troubled person, do unspeakable things and wall yourself off from reality so your narrative of self doesn’t include BEING A MONSTER/DEMON FROM THE WOODS. You can do all these things, and somehow still be a loving father who feels immense grief, loss and confusion about his daughter’s murder. You can but that you do from the monster inside of you, and yet still, in your heart, have the capacity for immense love and immense grief.

Is his hair white for different reasons? Or is that BOB?

First of all it just LOOKS badass. But are you asking why it went white when it did? It’s not a Bob thing…as far as I can tell, Bob and Leland have tango’ed before, and before Laura’s death, Leland’s follicles were fine. I think it’s another case of “moment of truth”: after Leland murdered Jacque, his hair turned white because he was publicly (if sympathetically) connected with the ability to murder. Leland’s murder of Jacque–the one the whole town gave him a pass on, because who wouldn’t, right?–was a big red flag that this man was capable of more than just weird tap-dancing. But Dale, in trying to figure out this case from the most backward, zen/Inherent Vice-y way possible, missed this giant red psychosis flag, and just accepted, along with everyone else, that Leland now had white hair. Totally. It’s fine.

Don’t worry about it. Don’t look directly at it. Don’t even comment on it, because it’s easier to pretend its a quirk instead of a sign of something more serious and disturbing at stake.

I think they used to be but Mike thought BOB was a bad influence, so he cut off his arm (that had BOB tattooed on it/infesting it/whatever) and gave him the cold shoulder. (AMAZING.) They have that type of relationship where you get a newsletter from them every couple of months and then one day, knock knock, who is there? BOB. Ugh, BOB, stop ringing the doorbell. BOB, we are not going for a joyride in the middle of the….okay, let me get that bottle of Jim Beam from under the sink where Sheila thinks she’s hiding it.

Most importantly, why did all those people in the Great Northern have bouncy balls?!?!

I dunno, maybe it’s related to the Northern’s latest chef find. Hopefully those Scandinavians will appreciate the effort (if they are ever coming backl)       .

I mean look, we’re living in a Stripstream situation here. Not everything is magical and awesome all the time, nor is it horrifying. Mostly it’s just…unsettling, especially because look at those assholes bounce around when there is a human death needing to be solved! How come the news media in Twin Peaks haven’t hinted at what would sure become a national story of a missing white girl. GET ON IT, ABC NEWS! There’s a bunch of weird shit around here! 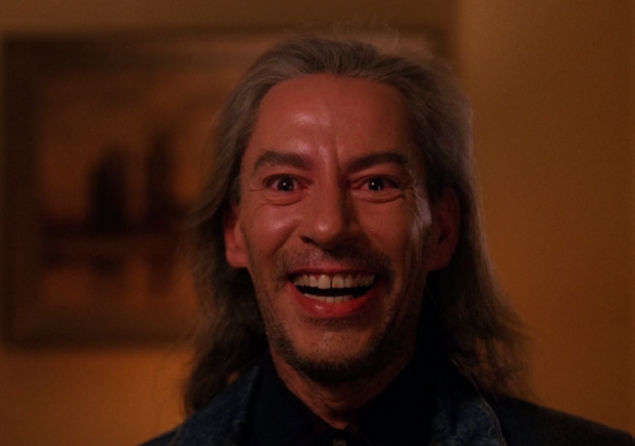