If you feel left out of the whole Twin Peaks phenomenon, we’re here to help! Every week, associate tvDownload editor Vinnie Mancuso attempts to figure out what the hell is going on in this town, while senior editor/Twin Peaks expert Drew Grant answers his questions. This week: ‘Drive With a Dead Girl.’

To begin this week’s foray into the town of Twin Peaks, I offer two quotes.

That first quote is from Harry Truman to Dale Cooper, after Truman does the impossible and uses actual real life evidence to charge Ben Horne with the murder of Laura Palmer. The second quote is from me to my computer screen, totally agreeing with everything Truman is saying.

Look, it’s not that I don’t like Twin Peak’s hocus-pocus, per se. I guess I just really want them to get somewhere with it. Or just get somewhere at all.

Take, for example, the end of this week’s episode. Audrey is in Cooper’s hotel room, trying to convince him she never did anything too prostitute-y at One-Eyed Jacks (which, shame on the rest of the staff not reporting the one prostitute severely slacking on the job), when Cooper gets an urgent phone call. He and the rest of the police department rush out to the woods, where they find yet another shrink wrapped dead teenager.

But, like, we knew she was dead. We watched her die, horribly. Her being dead is not a cliff hanger. I guess now they know Ben is innocent, but we already know the answer to that question too. Leland did it. Or BOB did it. Or WHATEVER. The episode both starts and ends with Maddy in a bag, and we haven’t gotten anywhere.

On the other demon/spirit/I don’t know what front, the One-Armed Man makes a daring escape from his hotel room. And by daring I mean hilariously nonsensical. The woman looking after him leaves the room, and a deputy in the hallway slowly saunters from the outside hallway into the room, where the one-armed man promptly knocks him out. But then he doesn’t leave through the hallway, he goes out the window. He totally didn’t need to knock that guard out. In the time that guard got into that room, ol’ one arm could have been out the window and halfway to Seattle.

Now that poor bastard has to get teased in the locker room as being “the guy who got knocked out by the dude with one arm.” I’ve been there, man. I’ve been there.

Somewhere among all this there’s a plot where Norma’s mother (who instantly loses all likability by jacking some random dude’s mashed potatoes, a sin punishable by death where I come from) comes to town because she has a new husband and  for GOD KNOWS WHAT REASON they are honeymooning in Twin Peaks. And Hank knows this new husband from jail, and, you know what, I was just really really distracted trying to figure out what the hell those dominoes are attached to. 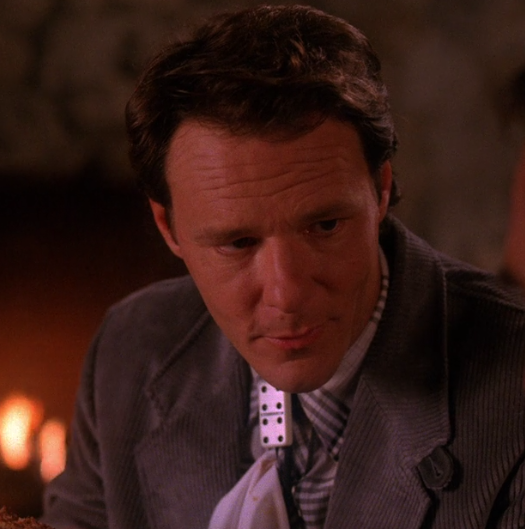 Is it the napkin? The tie? The collar? Is anyone going to tell him he looks stupid? Even violent convicts have to know when they look stupid.

So Ben is still in jail. He eventually finds out that Katherine is still alive, and she’s been setting him up the whole time. He receives this information via voice recorder, held by Pete. Now, this whole time Pete’s giddy as a school girl, acting like he and Catherine really pulled a fast one on Ben. Slow down, Pete. Ben still porked your wife. Like a ton of times, too. She’s actually saying that, right now, on the voice recorder. I mean I guess her showing up in a costume  you’d find in the town’s most racist Party City understandably threw you for a loop, but let’s not forget everything.

Oh, the one-armed man is back. They found him. No explanation of where he went when he escaped, just “No, no we got him. No worries.” Actually, this whole episode they treat that dude like a disobedient BOB-sniffing dog.

Andy says “I had my sperm counted twice. The first time they were all dead.” Lucy’s sister Gwen responds: “Oh, man. If I had a nickel every time I head that one.” Whoa. Do you think Gwen’s been through some serious shit?
I don’t know…does Gwen live in Twin Peaks the rest of the year when she’s not consoling her sister? If so, than she’s probably seen some shit, including the formerly dead coming back to life (Katherine, Dale after being shot, Maddy-as-Laura). But what Lynchian phrasing! Let’s marvel over that sentence structure, shall we?

I had my sperm counted twice. The first time they were all dead.

As a stand-alone quote, it’s hauntingly poetic. Look at Andy’s emphasis, not on the miracle that occurred (i.e., “When they tested the second time, they were alive!”), but on the unnaturalness of finding life where there shouldn’t be. Does he have zombie sperm? Ghost sperm? Haha, as IF Twin Peaks was just going to come right out and start naming their monsters! (Well, besides BOB. That’s actually a pretty normal name.) His strange speech pattern reminded me of Jack Nance’s (Look! It’s Pete Martell!) describe about his pet in Wild at Heart: “My dog barks, some. Mentally you picture my dog, but I have not told you the type o’ dog which I have. Perhaps you might even picture Toto… from “The Wizard of Oz.” But I can tell you, my dog is always with me.”

Then he (Jack Nance) starts barking like a crazy person, and the whole thing is just disturbing and bizarre.
[youtube https://www.youtube.com/watch?v=H9SrbPkpQHA&w=420&h=315]

Or the Mystery Man from Lost Highway, who utters cryptic haikus at a swank LA dinner party in total Geisha-face and while he and his phone doppleganger chuckle horrifically over the idea of your wife being stalked and murder.

Now, Andy is a different case–he’s not some lone freak without friends, looking to cause trouble but my a nice guy truly baffled to how this happened. Can’t you feel David Lynch behind the camera, mouthing the words as they’re scrolled through the prompter. “I had my sperm counted twice. The first time they were all dead.” And SCENE.

We could have all moved on except for Detective Dummy, But that damn bitch Gwen had to up the drama ante: “If I had a nickel for every time I heard that!” Now tharscares me: some people are just more terrifying than zombie sperm. What is Gwen hinting at: some dark past, a string of affairs and unplanned pregnancies, men who lie about their dead sperm and women who almost want to believe them?

Adding a third layer to read this not-that-remarkable scene is the fact that we know Gwen JUST had a kid with her husband Larry in Tacoma. So that’s at least one nickel. Great! Almost enough to buy a bus ticket back to…aw, forget it Gwen. You aren’t going back home to Larry and the kids. You have your nickel now; you’re safe.

Just out of curiosity: does the sheriff department need a new receptionist to the receptionist? She looks just like Patricia Arquette if you squint your eyes, I promise.

I guess what I really what to know the most about this week is that RANDOM over-a-minute flashback Ben and Gerry (whoa just got that) have of that girl gyrating? Dancing? let’s go with dancing. This one:

Look, if that’s all toddler Ben and Jerry did to Louise Dombrowski–she of the hook-rug dance–I think she got off pretty easy. Just to give you a sense of how already-fucked Ben was: with Jerry by his side, they were were like tiny King Joffreys, waiting around to become the Richest Dude in Twin Peaks/ King of Westeros/Whatever.

Question: Did Ben grow up rich? I think I’d feel better about this whole situation if I knew Ben has been prepping for his whole life to be a Peeping Tom in a Rich Guy suit.

How could there ever be a misunderstanding of why the ratings plummeted when stuff like that keeps happening? I feel like the average viewer was just like “Okay I’m gonna’ change the channel now” about 45 seconds in.
Well look, we the audience knows who did it, but no one in town does, so in a way we’re just getting started on our melodrama! Just kidding, Lynch HATED that ABC forced him to reveal the identity of Laura’s killer to get a ratings boost. which backfired when Lynch lost interest and left for Wild at Heart until the final episode. Here’s what Mr. Lynch said last October:

I had very little to do with Season 2, and I’m not happy with it. Up until “Who Killed Laura Palmer?” I was with it 100 percent, and then it drifted away. […] We had a little goose that was laying golden eggs, and they told us to snip its head off. But it’s a great world, the world of Twin Peaks, and it holds many possibilities.

Snipping the head off a goose would kill a goose, right? I mean first time, sure, they’re all dead. But maybe check again? This is, after all, Twin Peaks. 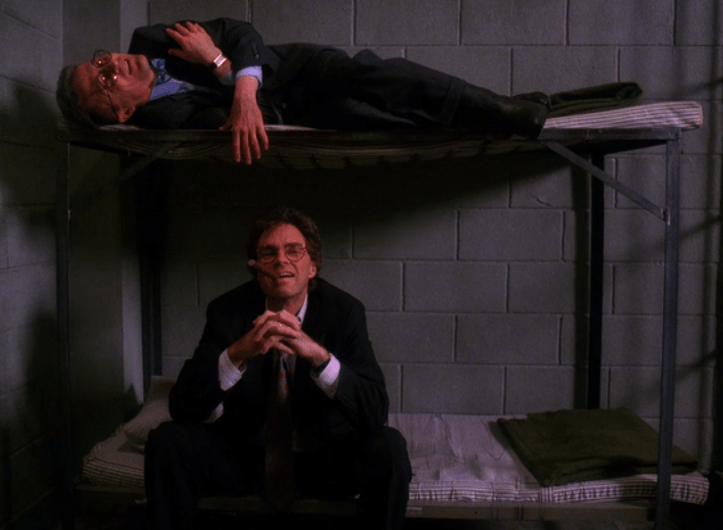