If you feel left out of the whole Twin Peaks phenomenon, we’re here to help! Every week, associate tvDownload editor Vinnie Mancuso attempts to figure out what the hell is going on in this town, while senior editor/Twin Peaks expert Drew Grant answers his questions. This week: ‘Arbitrary Law.’

My relationship with Twin Peaks these last few weeks or months or….years?…or however long we’ve been doing this has been a rough one indeed. I still don’t know if I like Twin Peaks. It mostly just confuses me, which isn’t a terrible thing, but occasionally it’s just dumb, which is very bad, and other times it’s just absolutely terrifying, which I enjoy in some sick way. And then sometimes James sings and it’s like angels have come from heaven itself to serenade me with their sweet, dulcet tones.

Even then, all I’ve heard is “it gets worse.” Apparently, David Lynch dipped out to make Wild at Heart but also probably to meditate atop a giant podium or something equally Lynchian, and the quality dipped right along with it. So every time I fire up a new season 2 episode, I batten down the hatches, clutch my talking log, and prepare for the worst.

So imagine my surprise when I watch “Arbitrary Law” and it was…great. Really, really great. This has been by far the best 40 and some change minutes I’ve spent in the town of Twin Peaks. What are these feelings? Am I even myself anymore? If I looked in the mirror right now and saw BOB wearing an “I <3 Twin Peaks” shirt staring back at me, I wouldn’t even be surprised.

And look, the episode even started with my favorite TV/Film cliche of all time — a group of men walking shoulder to shoulder towards the camera in slow motion! 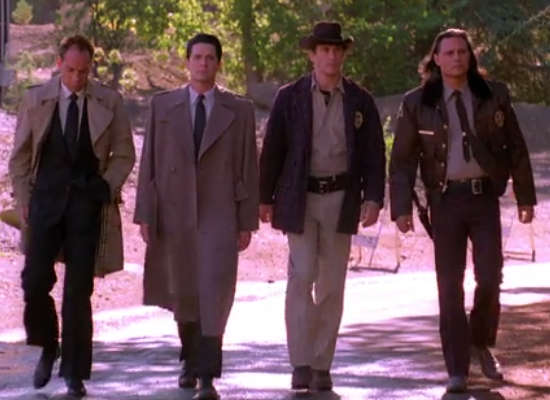 But anyway, things in Twin Peaks have heated the heck up with the discovery of Maddy’s body. Cooper asks Truman for 24 hours before contacting Maddy’s parents. 24 hours to do what, you ask? Oh, 24 hours to “end this” *THUNDER CLAP*

(Full disclosure, Cooper’s statement was not actually punctuated with a clap of thunder, but a lot of other things were this episode, and I just want to get in on the fun.)

Anyway, the 24 hour clock is on. First stop, Donna takes Cooper to that house with the little creepy magician kid. However, the woman that answers the door is most definitely NOT Happy Gimore’s grandmother. Mysterious! Instead, it’s just a woman that looks, actually, a lot like my grandmother (mysterious!), who gives Donna a page from Laura’s diary. Not the original one. The secret one. Keep up! And in the page is all this stuff about BOB, and how the only way Laura could stop him was to die. Also, the only person BOB was afraid of was Mike.

Cooper finds Mike in pretty bad shape, because they have been depriving him of his happy juice. But he does manage to mention to Cooper that when he and BOB were a young girl-murderin’ crew, their situation was like “a golden circle.” A golden circle just like the ring Cooper gave to the giant. The giant who is…somewhere.

But first, Donna stops by Leland’s house to drop off a copy of James’ Song on cassette, probably one of a few copies, which I hear you can buy on the underground music market for upwards of $4 million, a steal for such a priceless piece of art. But I digress.

Donna mentions Laura’s secret diary to Leland, and he starts to get slightly BOB-ified. Then Leland gets a call from Maddy’s parents, saying she never made it home, and oh boy you just know Leland is about to go full BOB. They even do the “Leland looks in the mirror but BOB is looking back” thing for what seems like the 40th time in two episodes.

Can we just have a round of applause for Ray Wise from here until the end of the episode. No one does “inhabited by a murder demon” better than him. If that was an Emmy category, he’d win every year, except for that one awkward year where Kathy Griffin shows up possessed by the spirit of Joan Rivers.

Anyway, this whole scene is amazing, and it is chilling. It’s wonderfully set up so you just can’t help but remember Leland murder-dancing the crap out of Maddy. But now it’s Donna, and she knows something horrible is about to happen. And we definitely know something horrible is about to happen, with them doing that brilliant flash between Leland’s wide smile and BOB’s demented screaming. Luckily, Truman cuts the shenigans short by showing up to ask Leland for help with the Maddy murder investigation.

WORTH NOTING: an extra award to the set dresser for remembering that Leland smashed Maddy’s face into a painting on the wall. 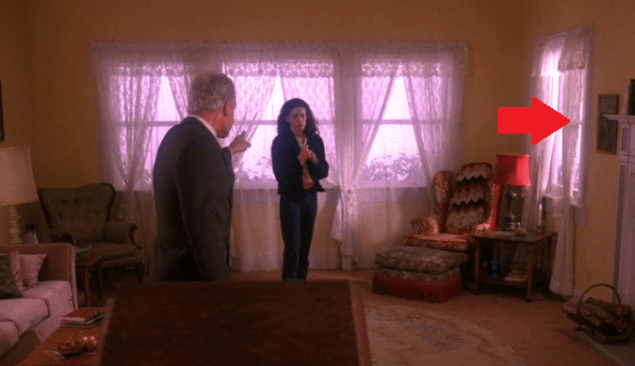 Now this next scene is just bonkers. Bonkers, dare I say, with a capital Onkers. Cooper has gathered every possible suspect — Ben, Bobby, Vegetable Leo, Leland — at the Great Northern. Oh, and Big Ed is there, too. I guess if your nickname is “Big” and you work at a backwoods gas station there’s always a slight chance you murder teenage girls as a hobby.

So then that old dude who works at the hotel shows up with Major Briggs in tow. The old dude hands Cooper a piece of gum, and Leland remarks that gum just happens to be his favorite gum. “That gum you like is going to come back in style,” the old dude says.

This sparks a memory in Cooper, and he suddenly recalls what it is Laura Palmer whispered in his ear: “My father killed me.” The giant returns to hand Cooper back his ring, and apparently that seals it. Case closed, yo. Cooper tells Truman to bring Ben down to the station, with Leland as his attorney, but it’s a ruse I tell ya. At the last minute, they lock Leland in the interrogation room.

Jump cut from that madness to…Richard effing Tremayne. The Dick to end all dicks. At first I was a little upset, because Twin Peaks has this tendency to cut from things you really care about to things you really, really, truly, really could not care any less about. At this moment, Dick Tremayne is high on that list. But no, his meeting with Lucy and Andy was required, I guess, but also vital because Dick being Dick, he lights a cigarette. This sets off the sheriff’s station sprinklers.

Down in the holding cell, Leland/BOB raises his arms to the sprinklers like he just escaped from Shawshank and rams his head into the cell door a couple times. Cooper bursts in to the room and in what was, I have to say, a genuinely moving scene it appears BOB has vacated Leland and Leland is fully aware of everything he’s done. Poor, crazy Leland. I really grew to enjoy that white-haired bastard. But alas, he dies.
[youtube https://www.youtube.com/watch?v=x3sZI8k20D0]
The last thing we see this episode is Truman asking, “Where is BOB now?” Then we see crazy spirit BOB moving through the forest before coming to an owl. Boom, that’s it.

What does that even mean? When people say “it gets worse,” are they really saying “now there’s a murderous demon owl plaguing Twin Peaks?” If so then you’re wrong, that’s not worse that is 1000% better.

1. If Mike is hell-bent on stopping BOB, why is he so damn unhelpful this episode when Cooper goes to see him?

You have or have not watched The Wire, remind me? Think of Mike like Bubbles: he’s a super helpful informant as long as he stays high. Sober, or in an antagonistic relationship with the police like season 4 with Herc, it’s hard to see what’s in it for good ole’ Mike. Best case scenario, he’s arrested and questioned about the previous murders he, uh, kind of admitted to doing? To the police? Worst case is that they arrest him, through him in jail and throw out the key and his drugs and his ability to be an owl. (Actually, what CAN Mike do? He’s not a spirit like BOB…maybe he was the previous host, like Leland?) Obviously Mike wants to help, but Mike’s got to think about Mike. (Himself, not that other Mike, who has been Busy.)

Well, it’s not so much a “wrapping up” issue, since it’s a TV show. It’s more like “Let’s create some other mysteries!” But obviously the problem of having a whole show based on the mystery of “Who Killed Laura Palmer?” made it easy for ABC to look at the falling ratings in season 2 and force Lynch and Frost to answer a question that served as the show’s conceptual glue. (The suits upstairs should have known better to move Twin Peaks to compete with Cheers on Thursday nights.)

So now it’s all B-plots about your least favorite characters, and a bunch of new, equally awful wacky ones that come on for brief pre-cameos (ie, before they were famous) which at least have a novelty factor that the overarching themes of the rest of the season lack.

Not quite a spoiler: we won’t see the Red Room again until the very final episode, nor do we really see BOB or the midget or any other kooky spirits we’ve come to know and love. It’s easier tothink about it like this: Twin Peaks past episode 9 is like a shitty Twin Peaks spin-off. Enjoy!

3. What do you think Sarah Palmer does all day? She’s never home, besides when she’s crawling down the stairs. Does she work? Have friends? Is she always upstairs, possibly screaming into a pillow?

Heroinnnnn? I’ve always assumed a lot of heroin? That’s what the white horse symbolized, right? Sarah also has to go to various vocal coaches to practice her MAKE IT STOP OH GOD screaming, and I think for the last couple episodes she’s been having consultations with Jacoby about getting those nodules on her vocal chords removed. 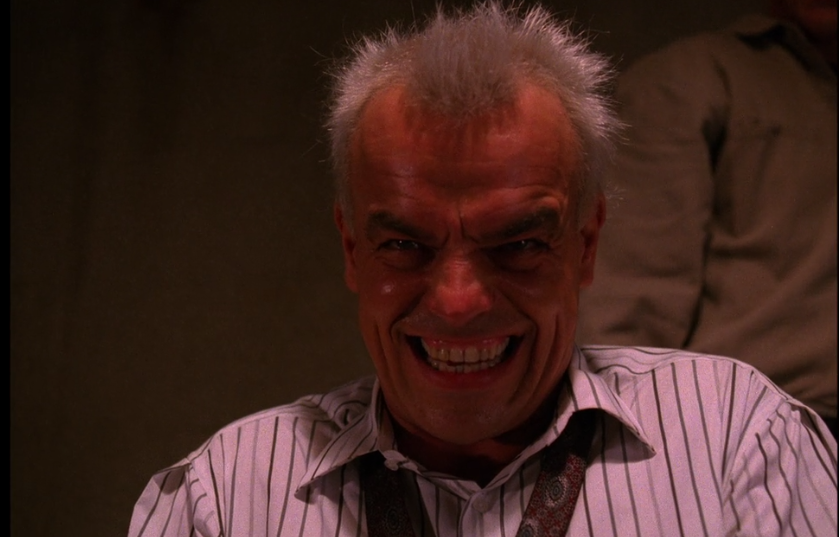