Now that a week has gone by and the dust has settled about whether The New York Times f*cked over our Sunday night viewing experience with their push notifications about Robert Durst, subject of the HBO documentary The Jinx, I feel like we’ve gotten some more perspective on the matter. So far, I’ve come across two separate but equally vocal contingents: the one group that had already heard of the Durst trial the first time around in Galveston, when the then 57-year-old convinced jurors that even though he had mutilated the body of his neighbor–stuffing different parts into garbage bags and then throwing them into an unsinkable swamp–he had not actually murdered him; and those among us who had either never heard the story or filed it away in that part of our brain that deals with cannibal cops and Charles Manson and ideas for Law & Order episodes. (Durst was actually the basis for two!)

The reason that Andrew Jarecki’s  miniseries was so riveting wasn’t just because of the access to this alleged murderer, or the man’s legendarily wealthy family. No, it was Durst himself: who seemed at once extremely cogent and as odd of a duck as they come. He appeared equal parts clever and clueless: half the time his alibis were just bald-faced lies–easy to fact-check if anyone had bothered to–and the way it comes across in the show is that Durst wanted to get caught. Or was at least attracted to the thrill of it; the cat and mouse game. How else could you explain how he even got caught in Galveston after the murder, shoplifting a chicken-salad sandwich from a local chain store despite having $500 in his pocket?

Which is why we should have all seen what was coming with this big Jinx reveal back in July, when Durst made headlines for a less violent, but no less splashy crime. From The New York Post: 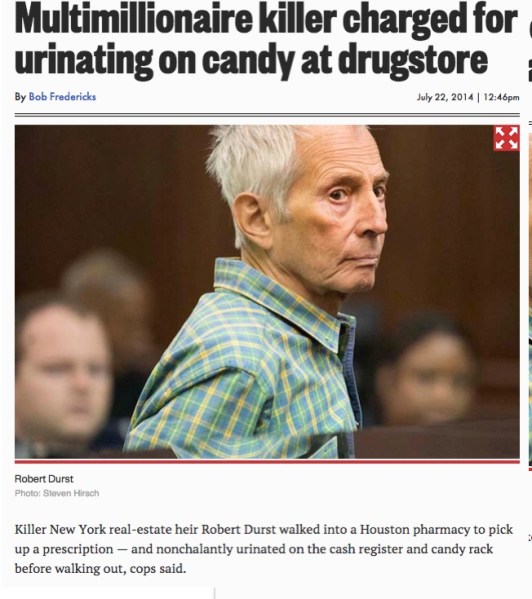 Dude just straight peed on some candy. Possibly, according to one eyewitness, Skittles.

“He wasn’t arguing with anybody and he didn’t seem agitated,” Silva said, adding she did not know what the prescription was for. “He just peed on the candy. Skittles, I think.”

Here’s the weird part: EVERY outlet picked up this story, but more as a quirky human interest tale than anything that could portend the sheer madness that would descend on American true crime culture in March. New York Magazine‘s Joe Coscarelli almost took the cake with this one, which referenced the fictionalized movie about the Durst saga, All Good Things*: 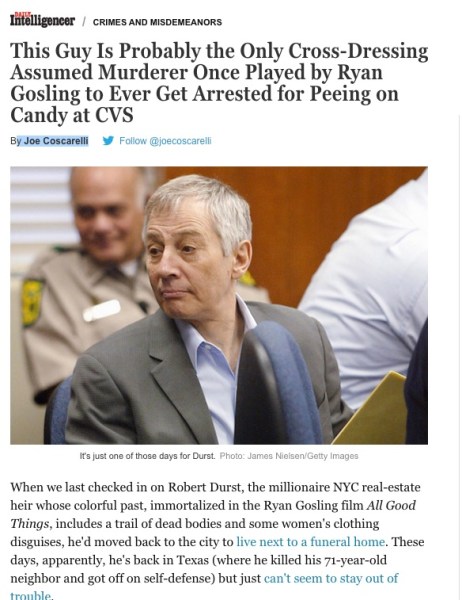 But the actual award for “Biggest Face-Palm, Re: Robert Durst Peeing on Candy” goes to Jewish Business News, an organization that had covered Durst extensively in the past (they at least refrained from calling him a killer and took the more judicial term “weirdo” in their coverage), and yet took five months to get this story out in December of 2014. 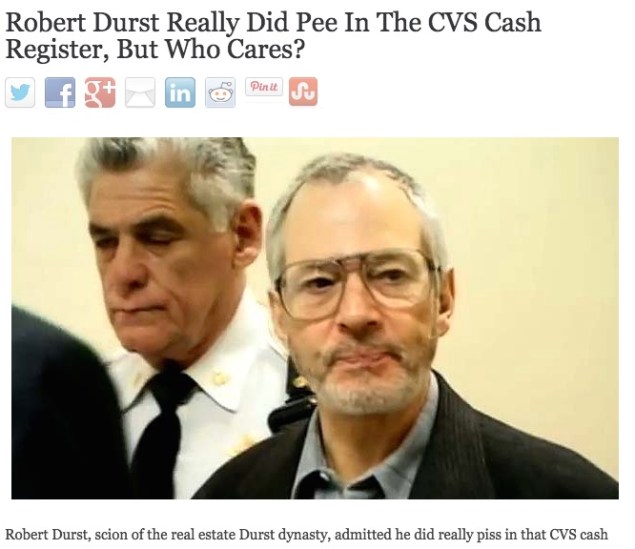 UM, everyone? EVERYONE SHOULD HAVE CARED ABOUT THIS.

I mean, technically, everyone did pick up the news, which ended in $100 worth of spoiled sweets, according to HuffPost: 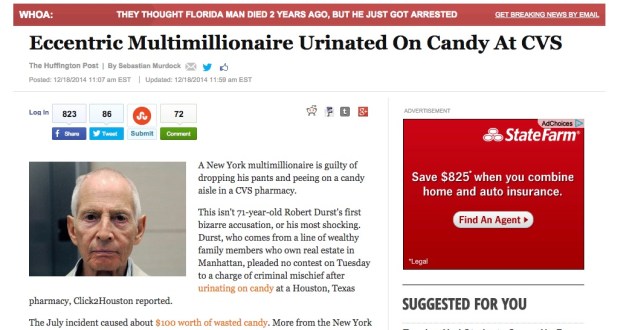 Nor was HuffPost the only outlet to use that adjective. 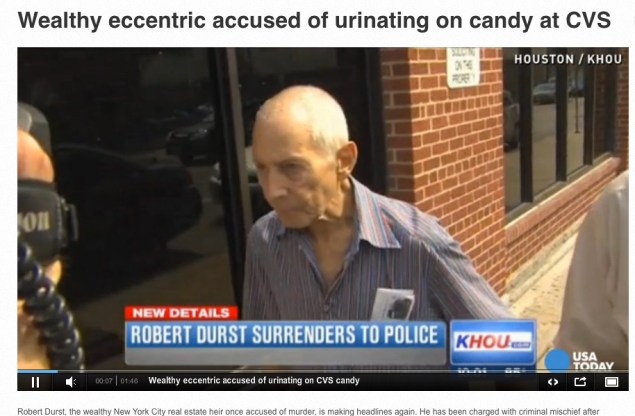 Eccentric. That’s putting it mildly. I wonder if we could walk back the description of Durst even further…. 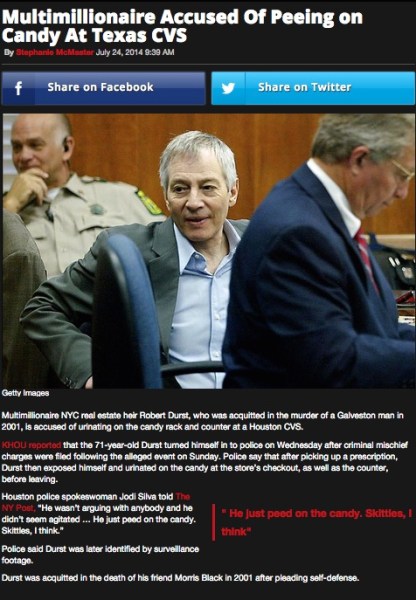 There we go. At this point, you know some golddigger was looking at the headline and like “Peeing on candy isn’t such a big deal. It’s not like he’s a murderer!”

In other news, has anyone else noticed that Robert Durst is basically Dr. Armond from Kroll Show?

Was this on purpose? It has to be, right? After all, long-time Kroll compadre John Mulaney was on the case as soon as The Jinx wrapped up. Coincidence? Well, like everything involving Durst, it’s possible…but hard to believe.

*That movie was TERRIBLE by the way. I tried to watch it a year ago, back when I was experimenting with being bi-Gosling. It was unwatchable, which is ironic for a fictionalized version of such a compelling, real life narrative. 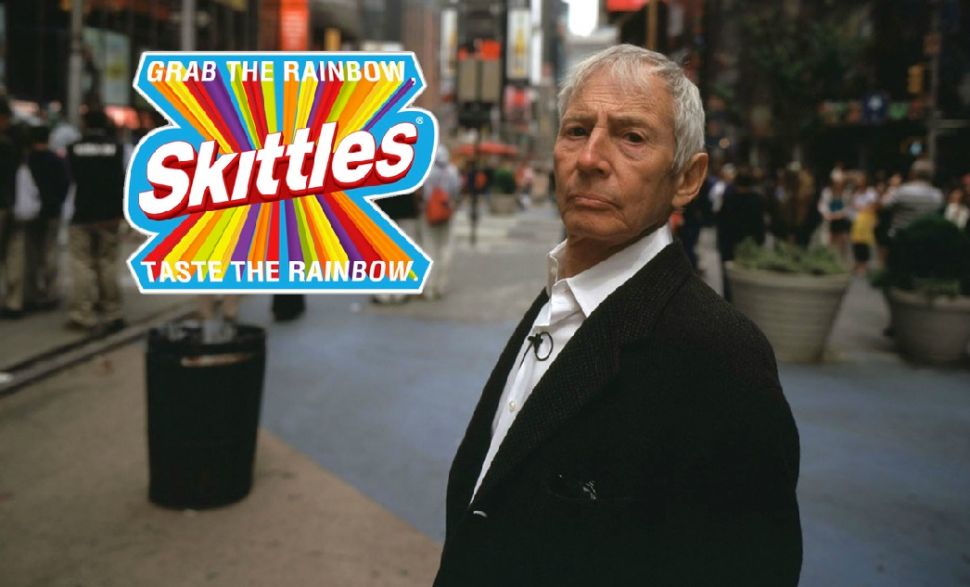