For those who guided the city through painful days following 9-11, the late Cardinal Edward Egan will remain always the dignified and resolute face of the Catholic Church in the midst of tragedy.

Former Mayor Rudolph Giuliani and his Fire Commissioner, Thomas Von Essen, recalled Egan’s role in presiding over the funerals of and providing solace to the families of Catholic first responders who perished in the terrorist attacks. Egan had served as archbishop of New York only a little more than a year before the planes struck the World Trade Center, and had become a cardinal in February of that year.

“The loss of Cardinal Egan is very sad for New York City. He helped greatly to bring the city through the aftermath of Sept 11. I knew him personally and had great fondness for him,” Mr. Giuliani told the Observer. “He presided over several funeral of a number of firefighters and police officers who died on September 11, some of whom were close personal friends of mine. I’m sure their families join me in being eternally grateful for the tremendous kindness and empathy he showed them.”

Mr. Von Essen noted how Egan’s famously cool and detached demeanor contrasted with that of FDNY Chaplain Mychal Judge—Victim 0001 of the attack, killed while praying in the lobby of the North Tower. But the former fire chief witnessed how offering comfort and reassurance to those who lost loved ones revealed the cardinal’s deep empathy.

“He had that impersonal kind of appearance or persona,” Mr. Von Essen recalled. “But when you got to know him and you saw how much he cared about people … We needed someone from the church who understood and who people who could connect with. Religion really, really helped people through that time.”

“Have you ever been with someone who is being talked to because someone they care about had just died? It’s not something that you learn,” Mr. Von Essen added. “He might not have had that warm and fuzzy approach, but he had the respect and he had the dignity that was really important to people during those times.”

Mr. Von Essen said he met with the cardinal days after the towers fell to discuss how to handle the funerals of the hundreds of Catholic members of the FDNY. The former deparment head, who described himself as an “irreverent” Catholic who once got kicked out of a parochial school, said he realized how Egan embodied the steadiness and solidity of the Church during that turbulent moment in history.

“There is a time when we do need that connection to the history and the strength that comes from the Church,” he said “And he was that person. He was that strength, he was that symbol of that big ship, the mother ship, the Church. You knew when Cardinal Egan was in the room what he represented.”

When the two ran into each other again last year, at an event for current Cardinal Timothy Dolan, Mr. Von Essen said that Egan’s 2009 retirement had not changed his grace and poise.

“He came right up to me and shook my hand and looked me in the eye. It was very warm and very respectful, and very remindful of what we had been through,” Mr. Von Essen recalled, adding that they did not talk long. “There’s not much you have to say, those of us that lived through it.” 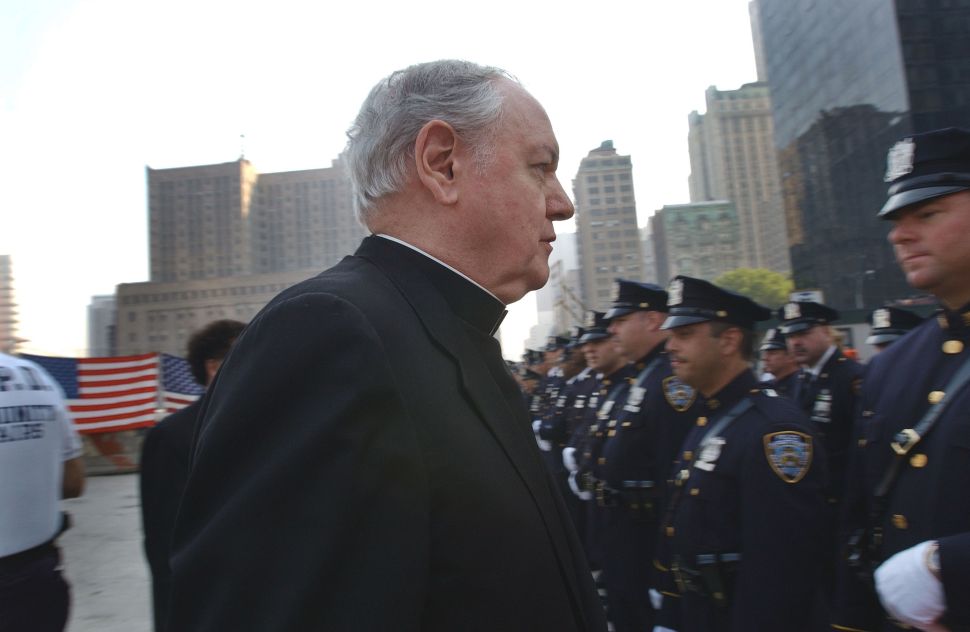