Episode three begins with Jasmine Masters condemning the “Aryan Airlines” team because “they all look alike.” A new low in throwing shade? She then goes on and on about Miss Fame, Pearl, Trixie and “that tired-assed, long-horse-faced” Violet. Jasmine’s genuine excitement for being on the show had been a major point in her favor. Now that her script flips to bitter, it’s pretty difficult to watch. It’s like when you feel bad for someone in high school so you sit with them at lunch—only to discover that they’re being shunned with cause, because they are nasty to the core.

Then it’s time for the mini-challenge. RuPaul comes in on a Hoveround, and tells the queens to dress up as elderly ladies. Too bad Tempest took her clothes home with her. The girls have a great deal of fun with this, with the results ranging from realistic to terrifying. As the cast does their best Golden Girls getdown, RuPaul stands there tossing off pretty hilarious one-liners (“No teeth, all shade!”). The two winners end up being Max and Kennedy Davenport, who will each head a team.

As RuPaul announces the main challenge, he repeats a bit of misinformation that Raven had stated in her season. Namely, that the term drag is an acronym that was first used by Shakespeare for “DRess As a Girl.” Far be it for the Observer to correct RuPaul on the meaning of drag, but welcome to Drag U. To begin with, males playing female roles on stage hardly originated in Shakespeare’s era. Further, the term “girl” to mean “woman” (as opposed to “female child”) is a far more recent convention. Finally, the use of acronyms themselves only took place within the last century. So while the origin of the term “drag” is unclear, it certainly is not as RuPaul presented it.

The two teams will be performing updated versions of Shakespeare plays, “MacBitch” and “Romy and Juliet.” Once again, it is Violet who is picked last. She remains baffled as to why this is so, given the fact that her performances are quite well-received at judging panel. Apparently it never enters her head to ask the other queens why she’s not being supported, but I’ll cut her a little slack given that she’s only 22 years old.

Generally speaking, there are two categories when Drag Race transcends normal television. The first is when the cast pulls out all the stops and delivers a show that’s just jawdropping. This is not one of those episodes. This episode falls into the second category, when everything that you can think of goes wrong—as well as a few things that you didn’t think of. The queens are creative even in their incompetence.

It starts with Pearl confessing to not knowing what MacBeth is. Is it an ‘80s car? An ancient dildo? Max’s team seems to have it pretty much together, and this challenge is obviously right up her alley. Kennedy’s team—oh, honey. At first Violet is given the “ghetto” part while Jasmine gets cast as the mean girl. As they read through, it comes painfully clear and clearly painful that they can’t make it work. Kennedy decides to switch the two parts but refuses to have another runthrough of the script with the entire team. What could possibly go wrong? Stay tuned

And we’re back. Max’s team shoots goes first and despite some miscues does a fairly competent job. At one point Jaidynn breaks down, fearing that she is messing up for her team and admitting that she doesn’t know how to act. “Girl, you are a drag queen,” Michelle tells her. “You are experienced in acting.” It is Visage at her best, being a coach and cheerleader at once. And while Jaidynn’s determination might be reminiscent of Trinity’s last year, it’s still a testament to their senses of perfectionism and professionalism.

The runway this week is having all the queens sporting facial hair. Last season Milk seemed like such an outlier for that very idea, and now it’s a theme for the entire cast. It’s wonderful how quickly drag innovates and evolves. If anyone has any friends who thinks drag is either about Milton Berle taking pratfalls in a housecoat and/or “trying to be a woman,” just show them this episode. If they only get more confused, so much the better.

Now the two skits are shown. Max’s team does perfectly fine…but then there’s “MacBitch.” It is easily the worst acting challenge the show has ever seen, in the best possible way. Think Madame LaQueer in prison meets Vivacious-head times ten. The best part was Jasmine standing stock still and delivering her lines directly into the air, with all the emotion and range of a hostage making a video insisting that they are happy and being well taken care of. It is so bad, in fact, that for the first time in seven seasons (except possibly for the Tammie Brown fight), RuPaul raises her voice and berates Kennedy’s team. I can’t tell if she was riffing off of Tyra Banks, but in any case it was popcorn time.

Max is declared the winner and Jasmine must lip sync against Kennedy. The two have to perform to Kylie and both are clearly out of their comfort zone with the number. Jasmine just bounces up and down. Though Kennedy had introed herself as “the dancing diva of Texas” and promised us spins, flips, kicks and jumps, she only delivers the first—spinning in circles with her arms outstretched in a dance performance that would do Vivienne Pinay proud. It’s Jasmine who RuPaul sends eventually packing. She hadn’t had much of a chance to show off her talents, but her few performances were adequate and hardly overwhelming.

So what are we looking to see next week? Well, I’m wondering if Miss Fame is Tatianna 2.0. One of the many times when Raven was trash-talking Tati, she said the biggest knock was that Tatianna wasn’t really a performer, that she “just wants to be a pretty girl.” Miss Fame has said similar about herself. Last season Courtney Act had that strategy, plus she could sing. But even though “the most beautiful man in the world” made it to finals, she had zero chance of winning the competition. This doesn’t bode well for our Martian supermodel. 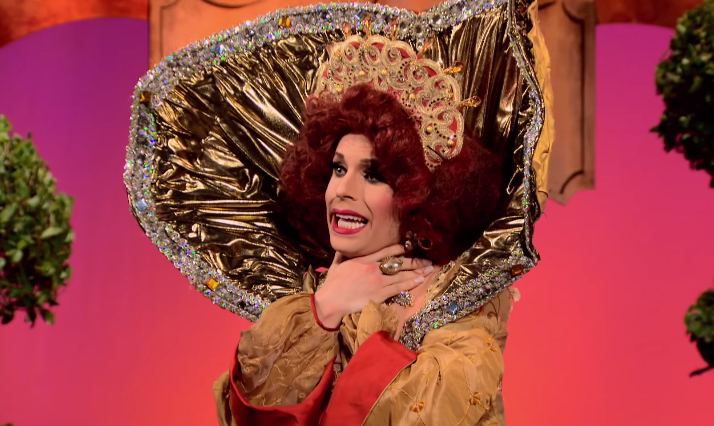