Kids, this was really one of the all-time great episodes. Really, truly. The show starts with a few of the queens baffled that Pearl sent Trixie home. As I addressed in last week’s recap, Trixie’s giddy interpretation of a Blondie song was a scandal. The fact that some people don’t seem to understand this is as disturbing as Coco Montrese never having heard of Little Edie.

The mini-challenge this week has the queens pair off to use paper to recreate iconic Hollywood runway looks. There’s obviously very little time for them to execute the look, with the results all being cracked out and hilarious. A particular standout is Katya dressed in Bjork’s swan dress. When she starts babbling sounds like Jodie Foster’s Nell, it’s impossible to refrain from a GLOL. It’s what earns her and teammate Mrs. Kasha Davis the win.

The partners must now prepare themselves to act as presenters at the first annual Despy Awards. If standup is hard, banter is often harder, since it’s a bit like a ping-pong match where one miss kills any momentum. At this point it seemed there would be some terrible flops in the Laganja tradition. Particularly nervous were Miss Fame and Violet Chachki (one day I will be able to spell her name without googling, I swear). Neither are comedy queens, and they were beautifully freaking the hell out.

Then came one of the greatest moments in Drag Race history ever. Ru tells Max that “you have a very big personality; Pearl, you do not have a very big personality.” It is probably the most hurtful thing that RuPaul has told any queen in the show’s run. Frankly, I’m shocked that Pearl didn’t burst into tears on the spot. All she can do is say, “I think that I have a great personality, actually.” As Ru starts to explain that he’s giving Pearl tough love, she very calmly and fairly says, “You kind of told me that I have no personality. That doesn’t make me feel good or give me confidence.” Then the two of them just stare each other down. They stare and they stare and they stare some more in silence. It’s The Office (UK) realness, it’s so tense and awkward. RuPaul’s stare race is only broken by Pearl quipping, “Do I have something on my face?”

In what will surely be a gif to remember, Pearl shakes her head to herself as RuPaul feels the need to remind her that this is a once-in-a-lifetime opportunity. (Except for Shangela.) (And All Stars.)

The teams then each have turns with Kathy Griffin giving them advice on how to tighten their material. Kathy is obviously a superfan of the show, and as a superfan her pointers are quite harsh but also right on the money. She knows what the queens are capable of and wants them to take it to the highest level possible.

Finally we get to the ceremony itself. One would think that Kasha and Katya would kill with the opening, but it wasn’t anywhere as impressive as what followed. After being introed as “the stars of Tyler Perry’s Roots”, Kennedy instantly adlibs (?) that they’re “straight from Kunta Kinte’s hut.” Drag allows for this sort of edgy humor, and I’m awaiting the internet apoplexy from those outraged both at Kennedy yet also somehow on her own behalf. In a nutshell, the teams were all hilarious. Kandy was a touch weak but wisely took on the straight man role to Ginger. And while Violet and Fame weren’t hysterical, they did far better than expected.

Bizarrely it is Max and Pearl who get the win this week, even though from what was shown Kennedy and Jaidynn were by far the best team. With five strong showings, it’s left to Ru to choose the least-good queens to perform, namely Kasha and Kandy. The final lip sync ends up being the best we’d seen so far this season, by far. It was clear from the jump that Kandy would be a great dancer, but it wasn’t at all obvious whether Kasha would be able to do the same. I should have given her more credit, since her Rochester friend Darienne Lake slayed on the lip syncs last season. Kasha gives as good as she got. So what’s a judge to do?

It’s unfortunate that the format of the show doesn’t always lend itself to character queens. One can see why Tammie Brown had refused to lip sync to a Michelle Williams song during the show’s second-ever episode. Similarly, Sharon Needles spent as much time dressed as characters like a beaver or a presidential candidate as she did in her horror gear. Mrs. Kasha Davis is an interesting, coherent persona. But here’s the thing: if a “housewife” can’t nail a hostessing challenge, she really has no business continuing further in the competition. Her elimination does feel a bit abrupt, as there was very little foreshadowing. At least we’ll be left with the screencaps of her giving stinkeye like no one else.

Next week is the last where there is an obvious candidate to sashay away, as Kandy Ho hasn’t been terribly impressive to date. After that is when things will get really interesting, because the rest of the pack are each quite solid performers in their own unique ways. 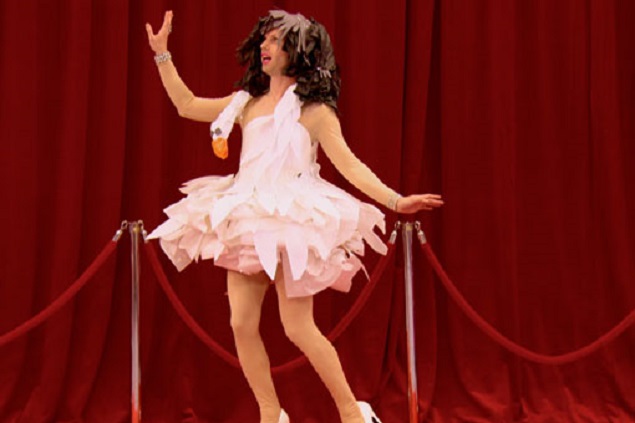