On Monday evening on Ludlow Street, the nightlife fixture Julio Montero stood outside a immaculately lit white box, nodding toward certain folk to allow them to enter the shrine  and escape the cracked sidewalks of the Lower East Side. The white box was the new home of Richard Taittinger Gallery, and it will not be your typical downtown gallery—the high walls and sleek facade strut and soar like a Chelsea stalwart. There was a profound lack of trash cans filled with Budweiser, the beverage of choice in these parts, and instead, there were small French women passing out flutes of Taittinger—the gallerist’s great-grandfather is the founder of the vineyard.

“This is perhaps the best-lit gallery I’ve ever seen,” said a veteran art reporter, agape as he craned his neck back to the skylight in the middle of the room. There were guys fresh from the airport in crisp suits but with their eye sockets tinted purple, having flown in for The Armory Show, just another stop on the trade winds of the global art circuit. I spotted local collectors who rarely venture outside of the orbit of 980 Madison, who probably needed a few taps at the iPhone Maps app to get from the Upper East to the Lower East.

And then when I got a chance to say hello to Mr. Taittinger—tall in a bespoke suit, the champagne spilling slightly as he gesticulated at the works, a fop’s perfect hair, handkerchief stuffed in pocket—he swooned at the sight of his new domain and began to speak with an impossibly thick slab of Gallic diphthong.

“Anything is possible when you have passion,” said Mr. Taittinger, on how he opened an art gallery.

This trajectory is of course all par for the course on Ludlow Street. The Ludlow Hotel was Joseph Yavarkovsky’s Paper, a stationery store in operation for 99 years. The art bar Max Fish was Max Fisch, a Judaica stand that sold knickknacks and trinkets—though, now, the art bar is a hipster chicken joint. Bodegas to cop dope became sushi tasting tables, performance art enclaves became brunch spots. And a folkie venue called The Living Room got gutted, re-outfitted, spit-shined, and stocked with bottles of pricy bubbly to become the Richard Taittinger Gallery.

“You know what it used to be right?” he said, and then spoke of going to shows at The Living Room before I could answer—I lived a block away for a few years, but rarely went. I was more of a Motor City guy. That dive’s gone now, too.

“I loved that place, but they moved two years ago to Brooklyn, and what we’re doing now, it’s something different,” he said. “It was, eh, it was a bohemian place. Now, the idea is to bring the standouts from Chelsea to the Lower East Side.”

And it appears it went from venue to gallery rather quickly—a few days earlier, the space was still quite in disarray. Movers were rushing in and out of the space with giant I-beams and boards. The view through the window showed unstuck nails strewn all about, with dust caking the proceedings. On the street there was a burst fire hydrant spewing down from the walls to the drains, and the fire truck siren wailed, crawling down Ludlow, stuck behind SUVs and loitering pedestrians. Out of this chaos, a block away, I saw Richard Taittinger grinning broadly, sauntering through the city as if he were anywhere but a downtown block that appeared to be on fire. He looked like he just stepped out to the balcony at the Maison in Reims where his family has produced champagne for centuries, ready to overlook an empire of aging grapes in a blazer with a pocket square.

But Mr. Taittinger doesn’t do that anymore. He told his family he was out the game, that he was giving up bubbly to become a man of the art world.

“I left the family business 7 years ago and moved to the capital of the world,” he said. “The Americans, they saw them at the Venice Biennale or the Documenta in Kassel, but what about the general public? This gallery will be more than just a selling place—it will be for everybody.”

He’s also planning a residency program so artists can come stay near the gallery, which is an area that he actually knows quite well. This was his first home in new york.

“I moved to New York, like, eight years ago, and first I moved to Ludlow Street,” he told me. “And I fell in love with that street. It was a different time, you know, the Lower East Side of that time.

He mentioned that the Lower East side has the “best brunch around,” and so to honor the Sunday tradition of going the Holy Church of Breakfast to enjoy communion of (artisinal) bread and (bottomless) wine, he will make sure the gallery is open all day Sunday.

As for what gives him the right to open the shiniest new spot of Ludlow Street, he’s been around. He’s paid his dues, relatively speaking, (the master’s program at Christie’s, a stint at Phillips de Pury, years working as an in-demand art advisor) and now he has his own gallery, with a show opening tonight, “Sinthome,” which is inspired by the works of Jacque Lacan (a show based on French theory, huh—maybe the gallery does belong on the Lower East Side.) He’s showing artists such as Haluk Akakce, Wang Du, Theo Mercier and Alexander Ponomarev, an international and high-pedigree squad.

“I want to give serious attention to artists from around the world,” he said. “I would love to have American artists, of course, but I want to have something to offer them. Today, we have these amazing artists from china, from Turkey, from France, from the Ukraine.”

At this point, we were speaking to each other in the future offices of the Richard Taittinger Gallery, on the second floor, and he started talking about how the giant swaths of construction will undoubtedly change the tenor and feel of the neighborhood—his neighborhood, my neighborhood—forever. The Soho House opening across the street, the Andy Warhol Museum going up a few blocks away. We walked downstairs, out of the office and back to the future gallery space, jackhammers pummeling away at the concrete, chainsaws ripping apart drywall, the men in hardhats oblivious to the French guy in a suit. We were making our way out and he paused to looked at the space. it was far from finished. He insisted that it would be done by Monday, and that I should come by to see it.

And so I came Monday, there was a new fancy spot on the Lower East Side, and Mr. Taittinger was right—just like at brunch, the bubbly was bottomless. 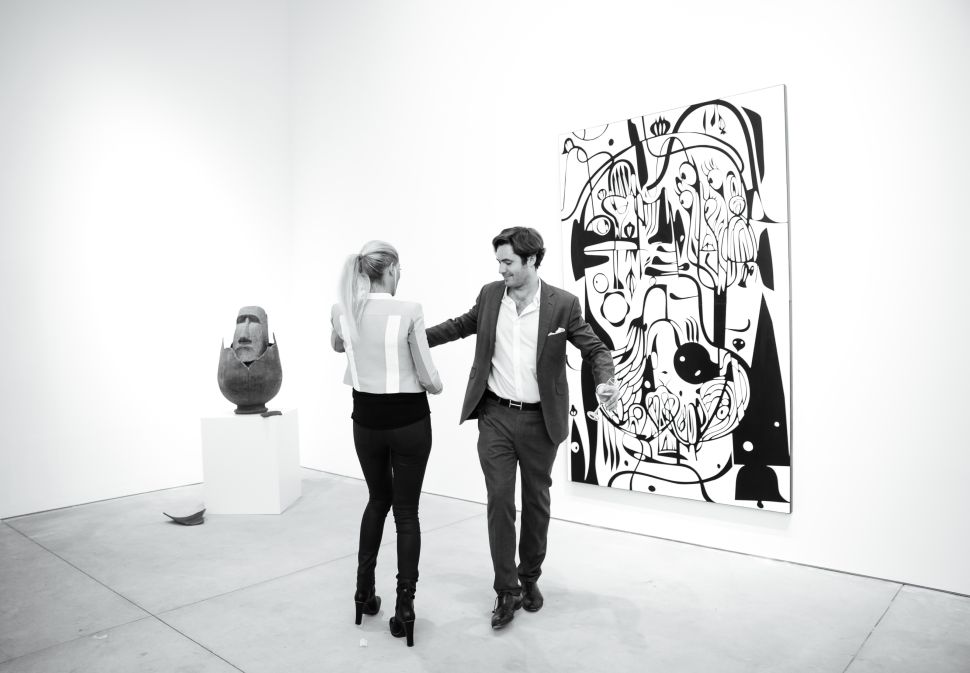