For meat-headed incoherence, a badly written, poorly directed and confusingly acted muddle of global nonsense, The Gunman is another ill-conceived entry in the latest dopey trend of middle-aged men blowing up stuff in an attempt to carve off a piece of the macho action market deserted years ago by Robert Mitchum and now newly dominated by Liam Neeson.

But mostly it’s just a lame excuse to show off what the diminutive Sean Penn’s been doing lately at the gym. He surfs. He strips down for the shower. He takes off his shirt for no reason. He’s got pecs he never had in Milk. Unfortunately, nobody ever won an Oscar for washboard abs. And nobody is going to win five seconds of admiration for 115 minutes of tedium in The Gunman. It’ll be on the video shelf at Walgreen’s before the Fourth of July.

The plot, co-authored by Don MacPherson and Pete Travis, has something vaguely to do with the star as a combination assassin/hit man in the Congo named Jim who murders the Minister of Mining while falling for a pretty surgeon named Annie, played with vapid insignificance by Jasmine Trinca. Jim’s partner in crime and enemy in love is Felix (Javier Bardem, whose performance consists of a series of flaring nostrils and blazing stares). Jim flees the Congo, then returns eight years later to dig wells. When the bad guys show up to kill him for what he did to the crooked minister in 2006, he flees again, first to London, where he looks up his old teammates Cox (theater icon Mark Rylance, slumming from his stage triumphs to make some money for a change) and Stanley (cockney character Ray Winstone, whose accent obliterates everything he says in a bowl  of porridge).

They all move on (for reasons never explained) to Barcelona, where the missing Annie is now married to the violent Felix and teaching school. First a doctor, then a teacher and then hanging out in an adoption agency, they write her in whenever the men stop to rest; no wonder Italian actress Trinca is so wooden. Between explosions, bloody fistfights, car chases and knocking off half the population of Spain, Jim is warned to avoid stress because his brain is suffering from a deadly plague that could implode in the presence of loud noise. Hey, they’re already in Spain, so they all end up—again, for no reason—at a bullfight. Since bullfighting is illegal in Barcelona, you don’t know whether to laugh or scratch your head in disbelief.

The early clashes in the Congo between rebels and a government in chaos come to nothing. Jim’s head trauma caused from job-related concussions are quickly forgotten. Being pursued by both mercenaries and Interpol makes no sense. A bid for social relevance when the Congo is reduced to genocide is introduced and junked. Just what is this movie about? If clunky director Pierre Morel, who helmed the first Taken flick with Liam Neeson, has any idea, he’s not sharing. The Gunman hops around in time frames like Mexican jumping beans. Its lack of focus, mixed-up acting styles (le Carré meets Our Man in Havana) and demented logic make it a candidate for loopiest action movie of the year.

Sean Penn’s skintight jeans and bulging biceps cannot camouflage the age lines or dewlaps. I know jobs are scarce after a certain age, but a fine actor appearing in this kind of bilge is a real blow. Worse still is watching Javier Bardem struggle to bring some life to a character that is underwritten to the point of cellophane. This time, his trademark frowning, glowering intensity just seems annoying. The Gunman is a disaster. Good helicopter, bad movie. 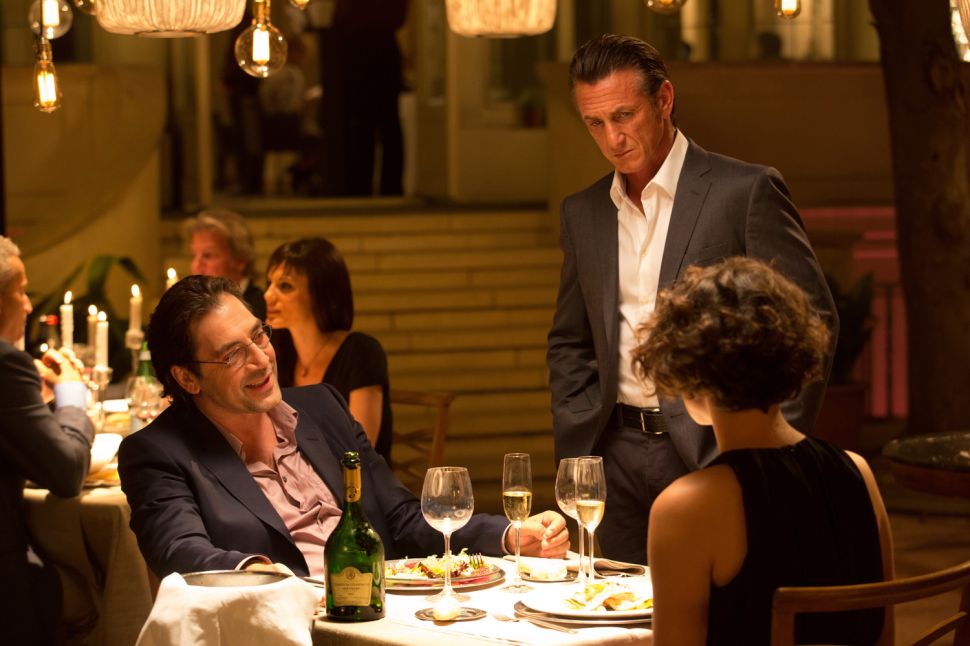