Finally, we can put up our feet and let computers take the wheel.

Automated vehicle pilot projects will roll out in the U.K. and in six to 10 U.S. cities this year, with the first unveiling projected to be in Tampa, Fla. as soon as late spring. The following year, trial programs will launch in 12 to 20 more U.S. locations, which means driverless cars will be on roads in up to 30 U.S. cities by the end of 2016. The trials will be run by Comet LLC, a consulting firm focused on automated vehicle commercialization.

He explained that they’re focusing on semi-controlled areas and that the driverless vehicles will serve a number of different purposes, both public and private. The vehicles themselves, which are all developed by Veeo Systems, will even vary from two-seaters to full-size buses that can transport 70 people. At some locations, the vehicles will drive on their own paths, occasionally crossing vehicle and pedestrian traffic, while at others, the vehicles will be completely integrated with existing cars.

One of the early test sites will be the U.S. Army’s Fort Bragg in North Carolina. There, small pod-like vehicles will transport wounded troops from their barracks to the nearby hospital for treatment and check-ups. The Comet team is also planning a pilot project at the United States Military Academy at West Point, although Mr. Clothier said this site has not been finalized.

At the first test site in Tampa, the plan is to start with public transit around the Museum of Science and Industry and eventually expand to the University of Southern Florida campus, as well as the neighboring City of Temple Terrace. The Comet team is also planning trials in two other Florida cities, in Greenville, S.C. and in Seattle, where the 70-person buses will be used in public transit.

At 25 to 40 percent cheaper, the cost to ride the driverless public transit vehicles will be significantly less expensive than traditional buses and trains, according to Mr. Clothier. They’ll also be far less expensive to operate. The vehicles are electric, rechargeable and could cost as low as $1 to $3 to run per day.

In addition to these first trials of automated vehicles for commercial use in the U.S., the U.K. will begin running tests this year in Greenwich, London as well. The $9 million project called GATEway will consist of public self-driving shuttles that will link residents to transport hubs, The O2 Arena and other destinations in northern Greenwich, carrying eight to ten passengers at a time.

Greenwich was chosen for the Project, which is being led by the U.K.’s Transport Research Laboratory (TRL), because it’s home to the Prime Meridian. “It is the global reference point for time and links to navigation,” Nick Reed, the TRL academy director, said. “It also has a massively growing population, so we’re trying to meet the needs of that with the technology.”

Upon entering the shuttles, each passenger chooses from the pre-determined destinations on the touch screen, and then the computer determines and readjusts the route as riders hop on and off. Each vehicle uses lasers to build up an image of the route and determine where it is and where it needs to go.

These shuttles will drive along their own route but must cross pedestrian and vehicle traffic at times. The lasers will also enable the cars to determine when it’s safe to cross and also to spot obstructions. At a recent launch event, the vehicles proved how safe they are and how well they can sense obstructions and the world around them.

“You can imagine a lot of the journalists wanted to see this thing run into pedestrians, so they were almost jumping in front of it,” Mr. Reed said laughing. “But it was doing what it was supposed to do and stopping.”

He also explained that these shuttles are only the first part of the trials. They’re also working on autonomous valet parking that would enable drivers with ordinary cars to pull up to their destination, send their car to park itself and then summon it later. Additionally, they’re beginning to research how automated vehicles can be used for grocery delivery and other urban services.

Mr. Reed feels that this technology won’t completely replace today’s cars and trains, but that it is disruptive and will be the norm soon.

He described his first experience in a driverless vehicle as feeling “vulnerable at first,” but said that it quickly became very comfortable.

“It’s a bit unnerving to begin with because you realize the system is in control and you’re relying on the sensors and brakes to keep you safe, but very quickly after seeing it respond to pedestrians and such, you see it work and become very comfortable. I became relaxed even,” he said, adding how happy we’ll all be able to just watch Netflix while our cars drive us around.

Mr. Clothier, who has been riding in automated vehicles since their military-only days and has even been passenger to a computer among semis driving at 65mph on a Michigan highway, feels similarly.

“It’s a whole new thing, but it will be comfortable,” he said. “People are very comfortable riding in [them]. It’s kind of like an elevator: you go in, put in your destination, the doors close and you’re off.”

Correction: The SLAC National Accelerator Laboratory participated in the Smart America Challenge as a possible future pilot site but a trial is not set to run there at this time. 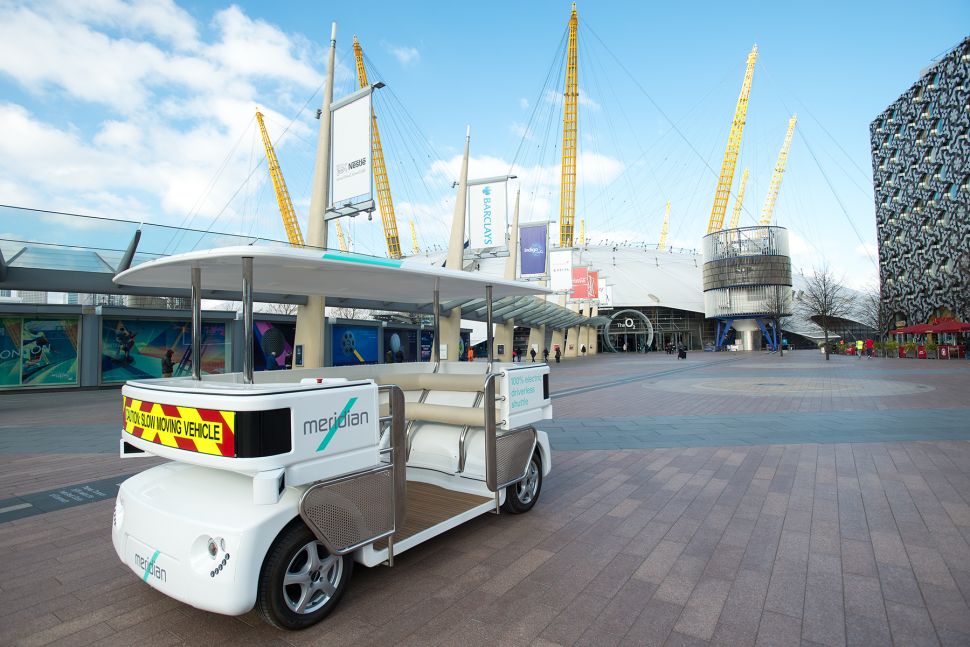